Vinalhaven is a town on the larger of the two Fox Islands in Knox County, Maine, United States. Vinalhaven is also used to refer to the island itself. The population was 1,279 at the 2020 census. It is home to a thriving lobster fishery and hosts a summer colony. Since there is no bridge to the island, Vinalhaven is primarily accessible from Rockland via an approximately 75-minute state ferry ride across West Penobscot Bay, or by air taxi from Knox County Regional Airport. 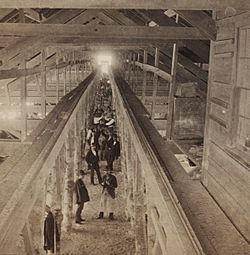 Archeological remains indicate that the island was first inhabited 3800–5000 years ago by the Red Paint People. Later, it became Abenaki territory. Europeans visited in the 16th century, and English Capt. Martin Pring named the archipelago Fox Islands in 1603. The first permanent English settlement occurred in 1766 when Thaddeus Carver from Marshfield, Massachusetts, arrived, and later purchased 700 acres (2.8 km2) from Thomas Cogswell on the southern shore near what would become known as Carver's Harbor.

Others soon followed to establish the remote fishing and farming community in the Gulf of Maine. The first families of Vinalhaven are considered to be Arey, Calderwood, Carver, Coombs, Dyer, Ginn, Greem, Hopkins, Lane, Leadbetter, Norton, Philbrook, Pierce, Roberts, Smith, Warren and Vinal. On June 25, 1789, Vinalhaven was incorporated as a town, named for John Vinal. Vinal was not an island resident, merely the agent who petitioned the Maine General Court to incorporate the new township; nonetheless the name stuck. In 1847, the North Fox Island seceded and became a separate township called North Haven. 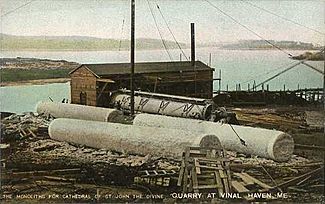 Monolithic columns quarried for the Cathedral of St. John the Divine, installation completed in 1904

Fishing, shipbuilding, logging and shipping were important early businesses on Vinalhaven. High quality granite was discovered in 1826, and Vinalhaven became one of Maine's largest quarrying centers for the next century. Today the island is dotted with abandoned old quarries, many of which have since filled with groundwater and are popular swimming holes for residents and visitors alike. Pinkish-gray Vinalhaven granite, excavated by the Bodwell Granite Company, can be seen in the State Department Building in Washington, New York City's Brooklyn Bridge, and the Union Mutual Life Insurance Building in Boston.

Granite was shipped for customs houses and post offices in New York; St. Louis; Kansas City; Buffalo, etc.; the railroad station and the Board of Trade in Chicago; the Washington Monument and federal office buildings in the Capital; the Pennsylvania Railroad Station and the Masonic Temple in Philadelphia; as well as private mansions, monuments, bridges, dams, and thousands of tons of paving blocks for the streets of Portland; Boston; New York; Newark; Philadelphia and other cities. The Vinalhaven quarries were the only ones deep enough to provide the eight huge polished columns called for in the original plans for the apse of the Cathedral of Saint John the Divine in New York City; unfortunately the massive columns broke under their own weight, and ultimately more than one piece of granite had to be put together to create each column. The quarries also provided foundation stone for the cathedral.

A noted lobster fishing community, Vinalhaven has fishing rights to much of Penobscot Bay and its offshore waters. There are ten major fishing grounds around Vinalhaven that the island's fishermen and some Matinicus Isle fishermen have used for centuries to capture such groundfish as cod, haddock, pollock, hake, lobster scallops and halibut. Shrimp, dogfish, mackerel and herring are also abundant in the waters around Vinalhaven. Vinalhaven lobstermen were the first in the nation to unionize. They began to organize in the winter of 2012-13, after frustration with low lobster prices being to paid to them and disagreements with the Maine Lobstermen's Associations leadership.

Like neighboring North Haven Island, Vinalhaven is well known for its summer community of wealthy Northeasterners, mostly from Boston, New York, and Philadelphia. The movie The Islander was filmed on Vinalhaven and some of the locals acted in the movie.

There were 545 households, of which 24.2% had children under the age of 18 living with them, 46.2% were married couples living together, 7.5% had a female householder with no husband present, 5.0% had a male householder with no wife present, and 41.3% were non-families. Of all households, 34.5% were made up of individuals, and 13.4% had someone living alone who was 65 years of age or older. The average household size was 2.14 and the average family size was 2.70.

Vinalhaven is the site of one of the first large wind power projects on the east coast of the United States. Approved by a vote of 383–5 on July 29, 2008, by members of the Fox Islands Electric Cooperative, the project was expected to significantly reduce rates on the island residents, who previously imported their power from the mainland via a submarine power cable. Three 1.5 MW wind turbine towers, which went online in late 2009, are capable of producing a comparable amount of energy to what the island uses.

Near the end of 2009, an Island Energy Task Force was established in order to "facilitate a transition to affordable, reliable, domestically produced energy, and on the consumer end, to energy-smart products, with special emphasis on serving the Vinalhaven community."

Starting in the spring of 2010, the task force began spearheading a project to use some of the Fox Islands wind energy to charge electric thermal storage heaters installed on the island. The charging takes place when the project's three turbines are generating more power than the islands need, which is common in the winter.

In operation the turbines have indeed reduced power bills, but at a cost of a loss of quality of life for nearby residents, who complain that the turbines cause constant noise and vibration. 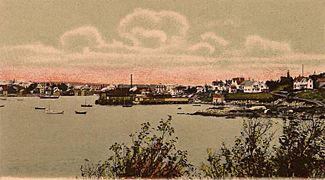 Vinalhaven from Lane's Island in 1905 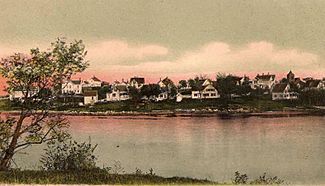 All content from Kiddle encyclopedia articles (including the article images and facts) can be freely used under Attribution-ShareAlike license, unless stated otherwise. Cite this article:
Vinalhaven, Maine Facts for Kids. Kiddle Encyclopedia.