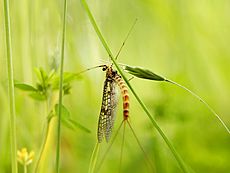 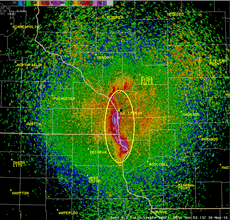 Mayflies (also known as Canadian soldiers in the United States, and as shadflies or fishflies in Canada and the upper Midwestern U.S.; also up-winged flies in the United Kingdom) are aquatic insects belonging to the order Ephemeroptera. This order is part of an ancient group of insects termed the Palaeoptera, which also contains dragonflies and damselflies.

Mayflies exhibit a number of ancestral traits that were probably present in the first flying insects, such as long tails and wings that do not fold flat over the abdomen. Their immature stages are aquatic fresh water forms (called "naiads" or "nymphs"), whose presence indicates a clean, unpolluted environment. They are unique among insect orders in having a fully winged terrestrial adult stage, the subimago, which moults into a sexually mature adult, the imago.

Mayflies "hatch" (emerge as adults) from spring to autumn, not necessarily in May, in enormous numbers. Some hatches attract tourists. Fly fishermen make use of mayfly hatches by choosing artificial fishing flies that resemble the species in question. One of the most famous English mayflies is Rhithrogena germanica, the fisherman's "March brown mayfly".

The brief lives of mayfly adults have been noted by naturalists and encyclopaedists since Aristotle and Pliny the Elder in classical times. The German engraver Albrecht Dürer included a mayfly in his 1495 engraving The Holy Family with the Mayfly to suggest a link between heaven and earth. The English poet George Crabbe compared the brief life of a daily newspaper with that of a mayfly in the satirical poem "The Newspaper" (1785), both being known as "ephemera".

At mating the female lays her eggs in the water. They settle to the bottom where they stick to rocks, vegetation or the bottom of the stream. They range in size by the particular species of Mayfly. Depending on temperature, the eggs take from a few days to a year to develop: usually it is one to three months. During this embryonic stage the mouth, legs, tail and organs all develop.

Mayfly are insects whose aquatic larvae (called naiads or nymphs) live from several months up to a year, in freshwater. The naiads go through 20 or 30 moults as they develop.

Mayflies are unique in that they moult one more time after getting functional wings (this is known as the alate stage). This second-to-last winged stage is usually very short, lasting from 30 minutes to one day, depending on the species. The function of the adult imago is reproduction and dispersal; they do not eat. The stage is a favorite food of many fish, and many 'fishing flies' are modeled on them.

It often happens that all the mayflies in a population mature at once (called the hatch). For a day or two in the Spring or Autumn (Fall), mayflies will be everywhere, dancing around each other in large groups, or resting on every available surface. The adults have various special features. Their rear wings are small or almost vestigial; the males have two long front legs for holding females, the rest have no function. Mating is usually in mid-air. The mayfly are quite a successful group. About 2,500 species are known worldwide, including about 630 species in North America. The hatch at La Crosse, Wisconsin has been a news event for several years. The hatch is so large it appears on weather radar. The emerging mayflies land on everything and cover some areas like snow.

Mayflies are the primary source of models for artificial flies, hooks tied with coloured materials such as threads and feathers, used in fly fishing. These are based on different life-cycle stages of mayflies. For example, the flies known as "emergers" in North America are designed by fly fishermen to resemble subimago mayflies, and are intended to lure freshwater trout. In 1983, Patrick McCafferty recorded that artificial flies had been based on 36 genera of North American mayfly, from a total of 63 western species and 103 eastern/central species. A large number of these species have common names among fly fishermen, who need to develop a substantial knowledge of mayfly "habitat, distribution, seasonality, morphology and behavior" in order to match precisely the look and movements of the insects that the local trout are expecting.

Izaak Walton describes the use of mayflies for catching trout in his 1653 book The Compleat Angler; for example, he names the "Green-drake" for use as a natural fly, and "duns" (mayfly subimagos) as artificial flies. These include for example the "Great Dun" and the "Great Blue Dun" in February; the "Whitish Dun" in March; the "Whirling Dun" and the "Yellow Dun" in April; the "Green-drake", the "Little Yellow May-Fly" and the "Grey-Drake" in May; and the "Black-Blue Dun" in July. Nymph or "wet fly" fishing was restored to popularity on the chalk streams of England by G. E. M. Skues with his 1910 book Minor Tactics of the Chalk Stream. In the book, Skues discusses the use of duns to catch trout. The March brown is "probably the most famous of all British mayflies", having been copied by anglers to catch trout for over 500 years.

Some English public houses beside trout streams such as the River Test in Hampshire are named "The Mayfly".

The hatch of the giant mayfly Palingenia longicauda on the Tisza and Mureș Rivers in Hungary and Serbia, known as "Tisza blooming", is a tourist attraction. The 2014 hatch of the large black-brown mayfly Hexagenia bilineata on the Mississippi River in the US was imaged on weather radar; the swarm flew up to 760 m (2500 feet) above the ground near La Crosse, Wisconsin, creating a radar signature that resembled a "significant rain storm", and the mass of dead insects covering roads, cars and buildings caused a "slimy mess". 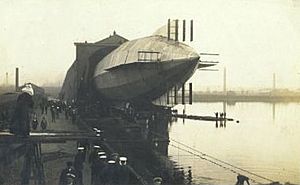 HMA No. 1 Mayfly emerging from her floating shed at Vickers' yard at Barrow-in-Furness on 24 September 1911

During the weekend of June 13–14, 2015, a large swarm of mayflies caused several vehicular accidents on the Columbia–Wrightsville Bridge, carrying Pennsylvania Route 462 across the Susquehanna River between Columbia and Wrightsville, Pennsylvania. The bridge had to be closed to traffic twice during that period due to impaired visibility and obstructions posed by piles of dead insects.

Mayflies are consumed in several cultures and are estimated to contain the most raw protein content of any edible insect by dry weight. In Malawi, kungu, a paste of mayflies (Caenis kungu) and mosquito is made into a cake for eating. Adult mayflies are collected and eaten in many parts of China and Japan. Near Lake Victoria, Povilla mayflies are collected, dried and preserved for use in food preparations.

As a name for ships and aircraft

"Mayfly" was the crew's nickname for His Majesty's Airship No. 1, an aerial scout airship built by Vickers but wrecked by strong winds in 1911 before her trial flights.

Two vessels of the Royal Navy were named HMS Mayfly: a torpedo boat launched in January 1907, and a Fly-class river gunboat constructed in sections at Yarrow in 1915.

The Seddon Mayfly, which was constructed in 1908, was an aircraft that was unsuccessful in early flight. The first aircraft designed by a woman, Lillian Bland, was titled the Bland Mayfly.

All content from Kiddle encyclopedia articles (including the article images and facts) can be freely used under Attribution-ShareAlike license, unless stated otherwise. Cite this article:
Mayfly Facts for Kids. Kiddle Encyclopedia.