La Crosse is a city in the U.S. state of Wisconsin and the county seat of La Crosse County. Lying alongside the Mississippi River, La Crosse is the largest city on Wisconsin's western border.

The city's estimated population in 2014 was 52,440. The city forms the core of and is the principal city in the La Crosse-Onalaska, WI-MN Metropolitan Statistical Area, which includes all of La Crosse County and Houston County, Minnesota, with a combined population of 135,298. La Crosse is home to the University of Wisconsin-La Crosse, Viterbo University, and Western Technical College. A regional technology and medical hub, La Crosse has received high rankings from some magazines in health, well-being, quality of life, and education. 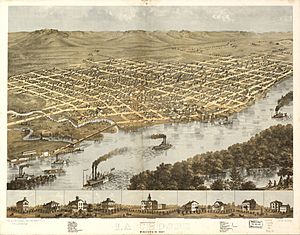 Artists representation of La Crosse in 1867.

The first Europeans to see the site of La Crosse were French fur traders who traveled the Mississippi River in the late 17th century. There is no written record of any visit to the site until 1805, when Lt. Zebulon Pike mounted an expedition up the Mississippi River for the United States. Pike recorded the location's name as "Prairie La Crosse." The name originated from the game with sticks that resembled a bishop's crozier or la crosse in French, which was played by Native Americans there.

The first white settlement at La Crosse occurred in 1841 when Nathan Myrick, a New York native, moved to the village at Prairie du Chien, Wisconsin to work in the fur trade. Myrick was disappointed to find that because many fur traders were already well-entrenched there, there were no openings for him in the trade. As a result, he decided to establish a trading post upriver at the then still unsettled site of Prairie La Crosse. In 1841, he built a temporary trading post on Barron Island (now called Pettibone Park), which lies just west of La Crosse's present downtown. The following year, Myrick relocated the post to the mainland prairie, partnering with H. J. B. Miller to run the outfit.

The spot Myrick chose to build his trading post proved ideal for settlement. It was near the junction of the Black, La Crosse, and Mississippi Rivers. In addition, the post was built at one of the few points along the Wisconsin side of the Mississippi River where a broad plain ideal for development existed between the river's bank and the tall bluffs that line the river valley. Because of these advantages, a small village grew around Myrick's trading post in the 1840s.

A small Mormon community settled at La Crosse in 1844, building several dozen cabins a few miles south of Myrick's post. Although these settlers relocated away from the Midwest after just a year, the land they occupied near La Crosse continues to bear the name Mormon Coulee.

On June 23, 1850, Father James Lloyd Breck of the Episcopal Church said the first Christian liturgy on top of Grandad Bluff. Today a monument to that event stands atop the bluff, near the parking lot at a scenic overlook.

More permanent development took place closer to Myrick's trading post, where stores, a hotel, and a post office were constructed during the 1840s. Under the direction of Timothy Burns, lieutenant governor of Wisconsin, surveyor William Hood platted the village in 1851. This opened it up for further settlement, which was achieved rapidly as a result of promotion of the city in eastern newspapers. By 1855, La Crosse had grown in population to nearly 2,000 residents, leading to its incorporation in 1856. The city grew even more rapidly after 1858 with the completion of the La Crosse & Milwaukee Railroad, the second railroad connecting Milwaukee to the Mississippi River.

During the second half of the 19th century, La Crosse grew to become one of the largest cities in Wisconsin. It was a center of the lumber industry, for logs cut in the interior of the state could be rafted down the Black River toward sawmills built in the city. La Crosse also became a center for the brewing industry and other manufacturers that saw advantages in the city's location adjacent to major transportation arteries, such as the Mississippi River and the railroad between Milwaukee and St. Paul, Minnesota. Around the turn of the 20th century, the city also became a center for education, with three colleges and universities established in the city between 1890 and 1912.

La Crosse remains the largest city on Wisconsin's western border, and the educational institutions in the city have recently led it toward becoming a regional technology and medical hub. 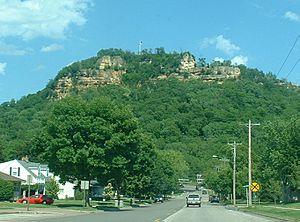 Surrounding the relatively flat prairie valley where La Crosse lies are towering 500 ft bluffs, one of the most prominent of which is Grandad Bluff (mentioned in Life on the Mississippi by Mark Twain), which has an overlook of the three states region. This feature typifies the topography of the Driftless Area in which La Crosse sits. This rugged region is composed of high ridges dissected by narrow valleys called coulees, a French term. As a result, the area around La Crosse is frequently referred to as the "Coulee Region". 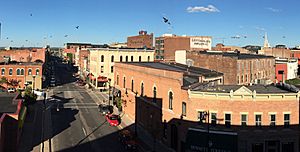 La Crosse has 17 voting districts (wards). Neighborhoods in the city include:

There were 21,428 households of which 19.5% had children under the age of 18 living with them, 31.6% were married couples living together, 9.7% had a female householder with no husband present, and 54.8% were non-families. 37.7% of all households were composed of individuals and 11.7% had someone living alone who was 65 years of age or older. The average household size was 2.18 and the average family size was 2.86. 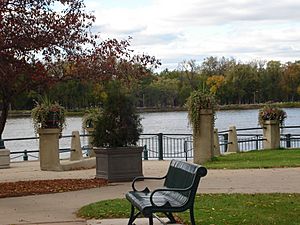 View of the Mississippi River from Riverside Park 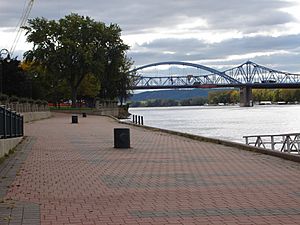 View of the Cass St. and Cameron Ave. Bridges, which both cross the Mississippi River, from Riverside Park in Downtown La Crosse.

The City of La Crosse's MTU bus service with routes reaching out to the suburbs served over one million users in 2007. 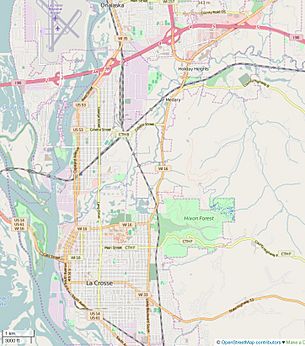 On the Mississippi River, cargo is transported to and from this area to St Paul and St Louis, using towboats, primarily moving dry bulk cargo barges for coal, grain, and other low-value bulk goods. 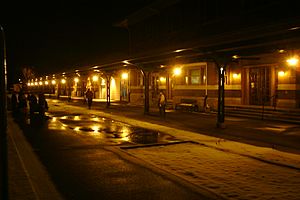 Railroad tracks owned by Burlington Northern and Santa Fe Railway (BNSF) pass through La Crosse providing freight service. The former Milwaukee and La Crosse Railroad/Milwaukee Road/Soo Line and now Canadian Pacific Railway runs through the city as well. It provides the track on which the La Crosse Amtrak station is located, and is a stop for the Empire Builder providing cross-country passenger rail service.

La Crosse has over 30 active arts organizations. The Pump House Regional Arts Center hosts visual arts exhibits throughout the year plus its own series of jazz, folk, and blues performers. The La Crosse Symphony is the city's regional orchestra and the La Crosse Community Theater has won both regional and national acclaim. The city is home to the Blue Stars Drum & Bugle Corps, a Drum Corps International member corps. Other arts sites include Viterbo University Fine Arts building, UW–La Crosse Art Gallery and Theater, and the La Crosse Center, which hosts national performers. Local sculptor Elmer Petersen has created sculptures that are exhibited throughout the downtown area, including La Crosse Players and the Eagle in Riverside Park.

La Crosse has many bars and nightclubs in the downtown central business district, as well as many neighborhood bars and grills. 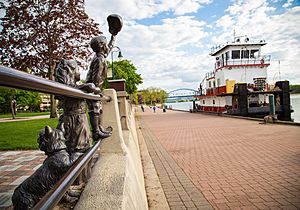 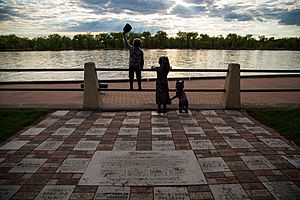 Riverside Park is situated on the riverfront of downtown La Crosse near the Blue Bridges and across the river from Pettibone Park. It hosts events such as Riverfest, Fourth of July fireworks, Oktoberfest, and the Rotary Lights. The steamboats American Queen, La Crosse Queen, and Julia Belle Swain make stops along the river in the park. The park has walking/running trails. 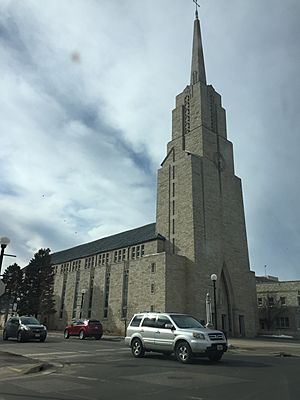 Cathedral of Saint Joseph the Workman 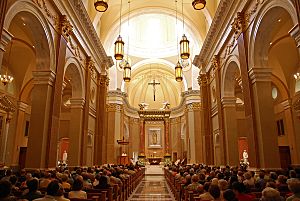 Shrine of Our Lady of Guadalupe

La Crosse is the episcopal see for the Roman Catholic Diocese of La Crosse. The Cathedral of Saint Joseph the Workman is the mother church of the Diocese. St. Rose of Viterbo Convent, the mother house of the Franciscan Sisters of Perpetual Adoration is in La Crosse. The Shrine of Our Lady of Guadalupe is in La Crosse. Commissioned by Cardinal Raymond Burke while he was Bishop of La Crosse, it was designed by architect Duncan Stroik.

Christ Church of La Crosse is the city's Episcopal church.

The Congregation Sons of Abraham is in La Crosse.

The Unitarian Universalist Fellowship of La Crosse has held services since 1951.

All content from Kiddle encyclopedia articles (including the article images and facts) can be freely used under Attribution-ShareAlike license, unless stated otherwise. Cite this article:
La Crosse, Wisconsin Facts for Kids. Kiddle Encyclopedia.