La Crescent is a city in Houston and Winona counties in the U.S. state of Minnesota. The population was 4,830 at the 2010 census.

La Crescent is located in the northeast portion of Houston County; the northern edge of the city falls into Winona County. The city is known as the "Apple Capital of Minnesota" because John S. Harris planted the first apple trees in the midwest here, resulting in many orchards in the present-day city. It is recognized as a 'Tree City' by the Arbor Day Foundation, and a 'Minnesota GreenStep City' by the Minnesota Pollution Control Agency.

Sitting on the banks of the Mississippi River, La Crescent, Minnesota is surrounded by beautiful bluffs with spectacular views of the river. Humans have inhabited this area, which is abundant with wildlife, for thousands of years. The most recent inhabitants before the arrival of white settlers were the Dakota Indians, who were a branch of the Sioux, and the Winnebago.

Following the 1803 Louisiana Purchase, Nathan Boone, youngest son of Daniel Boone was among the early surveyors of this area. The various Indian tribes who had lived here were relocated in the 1840s to accommodate white settlement.

La Crescent was founded in 1851 by Peter Cameron and was originally called "Camerons". Peter and his wife, Emma, were two of the town's most colorful characters. Peter tried to dig a canal to change the flow of the Mississippi River so it would flow closer to La Crescent and bypass La Crosse, Wisconsin across the river. He died 10 weeks before its scheduled completion in 1857, and the canal was never finished, although the canal can still be seen in aerial photographs of the city. The Presbyterian missionary Sheldon Jackson lived in La Crescent prior to 1872, when he moved westward to Denver and later Alaska.

The second name of La Crescent was "Manton", named by William and Harvey Gillett, after they cleared the downtown area for settlement for Peter Cameron. In quick succession, the name of the town was changed again by the somewhat unscrupulous Kentucky Land Company, which was a land speculation company. They wanted a more romantic-sounding name for the town to attract settlers and came up with "La Crescent", after the bend or "crescent" shape of the Mississippi River around the town. La Crescent incorporated in 1857.

John S. Harris arrived in La Crescent in 1856 and soon gave the town its identity of "Apple Capital of Minnesota", a title that the city copyrighted in 2002. Despite the belief "by 99 out of 100” people that apples could not grow in Minnesota", Harris planted his first apple trees here in 1857 and experimented with them until he grew trees hardy enough to withstand the severe Minnesota winters. He planted thousands of apple trees and hundreds of varieties, a full half of which he said were complete and total failures. Harris became known as "Father of the Orchardists" in Minnesota and was also a founding member of the Minnesota State Horticultural Society. Since 1948 La Crescent has celebrated this apple heritage annually with a weekend festival known as Applefest.

La Crescent has entertained a number of businesses throughout its history, but the one that has endured the longest is the apple industry. Around the 1940s La Crescent had about 40 small orchards in and around the city. Although the number of orchards has dwindled to less than a dozen, the area is about the same, as the orchards have been expanded in the bluffs farther away from the city. La Crescent grows gourmet apple varieties not found in most other places. Eighty percent of its apples are sold in Minnesota, although they are also exported to surrounding states and Canada.

There are markets in La Crescent which sell honey and other organic products, as well as apples. There are many outdoor activities to do in the area, such as biking, hiking, fishing, bird watching, skiing, snowmobiling, and fourwheeling. 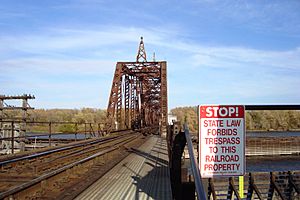 La Crescent sits 3 miles across the Mississippi River from Onalaska, Wisconsin and the northern part of La Crosse, Wisconsin. Winona, Minnesota is 21 miles to the north of La Crescent. It is the largest city in Houston County and the second largest in Winona County.

La Crescent is known for having many bluffs compared to other cities in Minnesota. The city is situated on the side of a large bluff, with other large hills within the city. Since La Crescent is below the normal level of the rest of the area, the bluffside shields it from some of the harsh winds and tornadoes that other areas on consistently flat ground experience.

There were 2,012 households, of which 30.7% had children under the age of 18 living with them, 55.2% were married couples living together, 10.0% had a female householder with no husband present, 2.9% had a male householder with no wife present, and 31.9% were non-families. 27.1% of all households were made up of individuals, and 12% had someone living alone who was 65 years of age or older. The average household size was 2.37 and the average family size was 2.86.

U.S. Highways 14 and 61; and Minnesota State Highway 16 serve as main routes in the community. The northern edge of La Crescent is skirted by Interstate 90 and I-90 Mississippi River Bridge. The Great River Road, a collection of state and local roads that follow the course of the Mississippi River, passes through La Crescent via US 61 and a short piece of MN 16.

A commuter bus service to La Crosse is operated by La Crosse MTU and has 13 trips daily through La Crescent.

All content from Kiddle encyclopedia articles (including the article images and facts) can be freely used under Attribution-ShareAlike license, unless stated otherwise. Cite this article:
La Crescent, Minnesota Facts for Kids. Kiddle Encyclopedia.