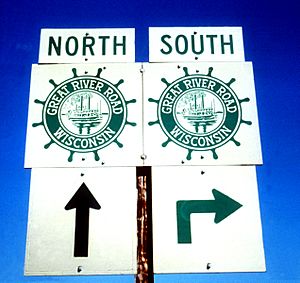 The Great River Road is a collection of state and local roads that follow the course of the Mississippi River through ten states of the United States. They are Minnesota, Wisconsin, Iowa, Illinois, Missouri, Kentucky, Tennessee, Arkansas, Mississippi and Louisiana. It formerly extended north into Canada, serving the provinces of Ontario and Manitoba.

The term "Great River Road" refers both to a series of roadways and to a larger region inside the US and in each state, used for tourism and historic purposes. Some states have designated or identified regions of state interest along the road and use the roads to encompass those regions.

It is divided into two main sections: the Great River Road and the National Scenic Byway Route. The eponymous segment runs on both sides of the river from Louisiana through the state borders of Kentucky/Illinois and Missouri/Iowa, excepting the full length of the road in Arkansas. A five-state section of the road has been designated a National Scenic Byway, running through Arkansas, Illinois, Iowa, Wisconsin, and Minnesota.

Developed in 1938, the road has a separate commission in each state. These in turn cooperate through the Mississippi River Parkway Commission (MRPC). The 2,340 miles (3,765 km) are designated with a green-and-white sign showing a river steamboat inside a pilotwheel with the name of the state or province. The over-all logo reads "Canada to Gulf" where the local name would be, and most MRPC publications denote the route as beginning in Ontario and ending in Louisiana.

The U.S. House of Representatives' Committee on Public Lands held hearings in 1939 and 1940 to discuss a bill that would have authorized a feasibility study of the Mississippi River Parkway concept. While popular, the parkway idea was soon overshadowed by World War II.

It wasn't until 1949 that Congress approved funding for a feasibility study. The study, "Parkway for the Mississippi River", was completed by the Bureau of Public Roads (BPR) (predecessor agency to the Federal Highway Administration) in 1951.

The study concluded that a parkway for the Mississippi River would benefit the nation as a whole. However, the report made an important distinction. Because it would be too expensive to build an entirely new parkway, BPR recommended instead that the project be designated a scenic route.

The scenic route would consist of existing riverside roads, and new construction would be limited to connecting the existing roads so that a continuous route could be developed. The existing roads would be upgraded to parkway quality. The modified approach would save a great deal of land acquisition and new construction costs. Another consideration was that some of the most scenic locations along the river had already been preempted by existing highways, railroads, and towns and cities.

The concept of a scenic route rather than a national parkway was adopted. As a result, the Great River Road is not owned by the National Park Service, as is the case with true national parkways, such as the Blue Ridge and Natchez Trace Parkways. Instead, the states have developed the Great River Road through a nationally coordinated program. BPR recommended "that the selected route shall be improved in a superior manner and that it should be dedicated to recreational purposes as well as to moving traffic". The needed construction and improvements "can be done with regular apportionments under the federal highway act or by the states on their own..."

With the Federal Highway Act of 1954, Congress responded to the recommendations of BPR by appropriating planning funds. BPR was authorized to work with each of the states to develop specific criteria for the parkway and to determine one specific route within each state for the Mississippi River Parkway. By the late 1950s, the familiar green-and-white pilot's wheel marker began to spring up on various sections of the designated route. Planning continued through the 1960s.

With funds available, development could begin in earnest. In 1976, the Federal Highway Administration (FHWA) issued program guidelines setting criteria for the Great River Road. The states then set up their own procedures for selecting the route of the Great River Road within their state boundaries.

"The Great River Road should be located within designated segments to take advantage of scenic views and provide the traveler with the opportunity to enjoy the unique features of the Mississippi River and its recreational opportunities", the guidelines said. The criteria also specified that the Great River Road should provide for a variety of experiences or themes, including history, geology, and culture, and that the road should provide convenient access to larger population centers. Protection of the Mississippi River corridor was required by "appropriate route selection, effective control and development, and scenic easement acquisition".

All content from Kiddle encyclopedia articles (including the article images and facts) can be freely used under Attribution-ShareAlike license, unless stated otherwise. Cite this article:
Great River Road Facts for Kids. Kiddle Encyclopedia.