Prairie La Porte, meaning "the door to the prairie," was the first name given to Guttenberg by French explorers in 1673. The Guttenberg area was a site of Sac and Fox campgrounds until 1823. The Louisiana Purchase of 1803 transferred ownership to the United States and the Black Hawk Purchase of 1833 finally opened the area for legal settlement.

Guttenberg’s past is preserved today in the many limestone buildings built by German immigrants in the mid-to-late 19th century. These structures were used for both residential and commercial purposes. Many are pre-Civil War era and are on the National Historic Register (NHR).

Guttenberg's riverfront location was pivotal in its early commercial development. The town first served as a focal point for westward settlement and as an early governmental and administrative center. It was the early location of the county seat from 1838-1843. Guttenberg served as a supply center for the general area until the Civil War, when railroads and an interior road system combined to detract from Guttenberg's role as a market center.

The earliest businesses included general supply stores, blacksmith, wagon shops, and hotels. The loss of the county seat in 1843 slowed growth and the population declined. Economic revival began in 1845 with the influx of hundreds of German immigrants under the auspices of the Western Settlement Society of Cincinnati and continued with the development of the lead mining industry along Miners Creek.

The German immigration began in 1845, and by 1850 the town was sizable and nearly all German. The city takes its name from Johannes Gutenberg, the inventor of movable type. A replica of a Bible he printed is on display at the public library.

Guttenberg incorporated in 1851. The influence of the German population was best indicated by the construction during the period between 1845 and 1865 for over one hundred stone buildings. The bluff limestone was easily obtained and good, local clay and lime for construction was available. Four large riverside warehouses opened and a large flour mill, stores, and hotels appeared during this period. The steamboat trade deposited merchandise and picked up farm produce, milled flour and lead ore.

Guttenberg experienced many floods, the most recent and devastating being in 1965, after which a levee was built. Today, Guttenberg's population is 1,980 and it is the largest town in Clayton County.

The community is next to the Mississippi River across from Wisconsin and is on US Route 52. 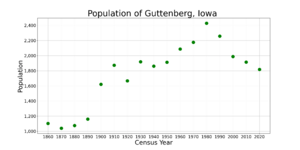 The population of Guttenberg, Iowa from US census data

There were 887 households, of which 20.2% had children under the age of 18 living with them, 47.8% were married couples living together, 7.0% had a female householder with no husband present, 3.4% had a male householder with no wife present, and 41.8% were non-families. 37.4% of all households were made up of individuals, and 21.1% had someone living alone who was 65 years of age or older. The average household size was 2.06 and the average family size was 2.66.

St. Mary IC School, a Catholic K-8, is in operation. It formerly had a senior high school division that closed in 1968.

All content from Kiddle encyclopedia articles (including the article images and facts) can be freely used under Attribution-ShareAlike license, unless stated otherwise. Cite this article:
Guttenberg, Iowa Facts for Kids. Kiddle Encyclopedia.