Johannes Gensfleisch zur Laden zum Gutenberg (c. 1400 – February 3, 1468) was a German blacksmith, goldsmith, printer, and publisher who introduced printing to Europe with the printing press. His introduction of mechanical movable type printing to Europe started the Printing Revolution and is considered a milestone of the second millennium, which brought in the modern period of human history.

The printing press played a key role in the development of the Renaissance, Reformation, the Age of Enlightenment, and the scientific revolution. It began the modern knowledge-based economy and the spread of learning to the masses.

In 1439, Gutenberg was the first European to use movable type (letters, numbers, and punctuation on a page). Among his many contributions to printing are: the invention of a process for mass-producing movable type; the use of oil-based ink for printing books; adjustable molds; mechanical movable type; and the use of a wooden printing press.

His best invention was the Gutenberg press: a combination of these ideas that made a quick and inexpensive way to produce printed books. The use of movable type improved upon handwritten manuscripts and woodblock printing, which produced 40 - 50 pages per day. His press could produce thousands of pages per day. Gutenberg's printing technology spread quickly throughout Europe and later the world. 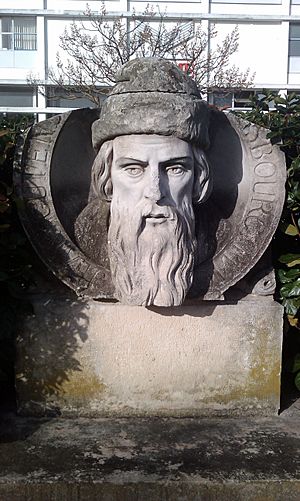 In Renaissance Europe, the new idea of mechanical movable-type printing changed society. Before this time, only the rich could afford books and education. Because of the invention and use of the printing press, almost anyone could learn to read and write, which opened doors for regular people to accomplish more for themselves. A new class of people called the middle class began to form.

In the 19th century, steam-powered rotary presses replaced the hand-operated Gutenberg-style press, which allowed printing on an industrial scale. It became practically the only way that modern bulk printing was done.

His major work, the Gutenberg Bible (also known as the 42-line Bible), has been praised for both its beauty and technical quality. It could take up to a year for a priest to handwrite a Bible, and Gutenberg's press changed this. 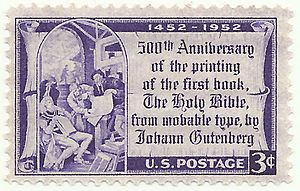 In 1462, during the Mainz Diocesan Feud, Mainz was sacked by archbishop Adolph von Nassau, and as an old man, Gutenberg was exiled. He moved to Eltville.

In January 1465, von Nassau recognized Gutenberg's achievements and gave him the title Hofmann (gentleman of the court), a yearly salary, and other things like grain and wine. It is believed he may have moved back to Mainz around this time, but this is not certain.

Gutenberg died in 1468 and was buried in the Franciscan church at Mainz. He was not famous at this time. This church and the cemetery were later destroyed, and Gutenberg's grave is now lost. 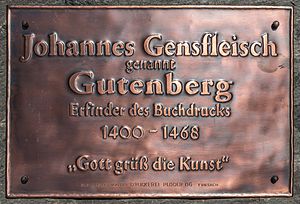 In 1504, Professor Ivo Wittig mentioned him as the inventor of typography in a book. In 1567, the first portrait of Gutenberg, which is thought to have been made from someone's imagination, appeared in Heinrich Pantaleon's biography of famous Germans.

All content from Kiddle encyclopedia articles (including the article images and facts) can be freely used under Attribution-ShareAlike license, unless stated otherwise. Cite this article:
Johannes Gutenberg Facts for Kids. Kiddle Encyclopedia.