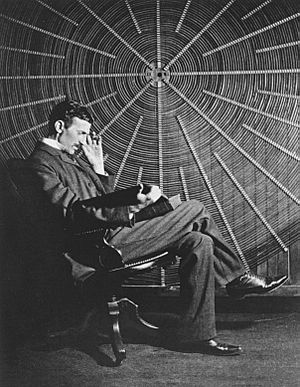 Nikola Tesla sits in front of the spiral coil of his high-frequency transformer at East Houston Street, New York. 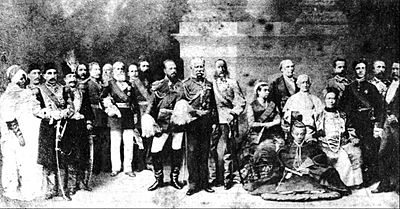 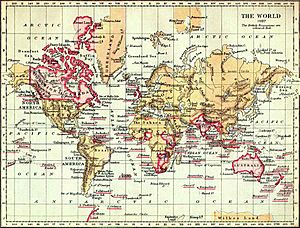 The British Empire in 1897, marked in the traditional colour for imperial British dominions on maps 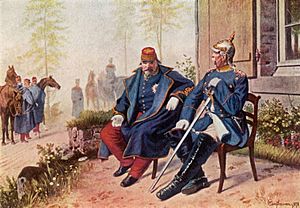 Napoleon III and Bismarck after the Battle of Sedan

The modern period has been a time of many advances in science, politics, warfare, and technology, and globalization. During this time that the European powers began a political, economic, and cultural beginning to the world.

This period is also called the early modern period. This time was a time where the Europeans found the New world and began colonizing it. It also saw trade with China and other Eastern Asian cultures.

Within the early modern period, some events shaped the world immensely:

This period saw advances in industrial technology. Industries were beginning to make clothes, armaments, and other useful tools people need. This industrial revolution began the modern world as we know it.

The Napoleonic era is a period in the History of France and Europe. It is also known as the fourth stage of the French Revolution, the first being the National Assembly, the second being the Legislative Assembly, and the third being the Directory. The Napoleonic era begins roughly with Napoleon's coup d'état, overthrowing the Directory. It ends at the Hundred Days and his defeat by the alliance of several nations at the Battle of Waterloo in 1815.

During this century, the Spanish, Portuguese, and Ottoman Holy Roman and Mughal empires start to die

Following the Napoleonic Wars, the British Empire became the world's leading power, controlling one quarter of the World's population and one third of the land area. It helped trade, and battled piracy. This time also sees the first lightbulb, Cars, railways, airplanes, printing press and other inventions

The 20th century was a time in which advancements in technology and medicine changed peoples way of life. Some advancements were in space exploration, nuclear technology, genetics, and the beginning of the information age.

This was also a time of the two world wars (World War I, World War II), the outbreak of Spanish Influenza, the Cold War, and the decolonisation of many parts of the world.

All content from Kiddle encyclopedia articles (including the article images and facts) can be freely used under Attribution-ShareAlike license, unless stated otherwise. Cite this article:
Modern history Facts for Kids. Kiddle Encyclopedia.