Age of Discovery facts for kids

The Age of Discovery or Age of Exploration was a period from the early 15th century that continued into the early 17th century, during which European ships traveled around the world to search for new trading routes and partners. 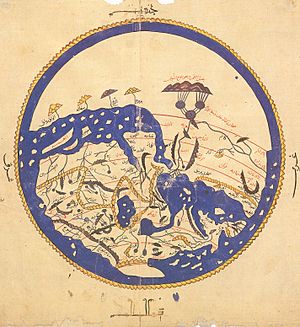 This south-oriented map, made by Arab geographer al-Idrisi in 1154, was one of the most accurate world maps prior to the age of European exploration.

Henry the Navigator started by paying Portuguese sailors to explore the west coast of Africa. In 1419 Joao Goncalves Zarco discovered the Madeira Islands. Later in the 15th century, Vasco da Gama reached the southwestern tip of Africa and established the city of Cape Town, a Portuguese colony. This opened the way to the Indian Ocean. In the next two centuries, the Portuguese created a great trading empire on coasts of Africa, the Arabian Peninsula, and India. The Portuguese Empire eventually weakened after the Dutch East India Company rose as the major power in Indian Ocean trade.

In a hurry to compete with Portugal for a colonial empire, Spain sent Christopher Columbus to the opposite route of the Portuguese. Instead of going south along the west coast of Africa, Columbus sailed across the Atlantic Ocean. He believed that he came to Asia. Later, some Spanish sailors found out that this land was a different continent than Asia. It is now called the Americas.

In the 16th century, Spanish conquistadores gained the whole of what later became Latin America, except some British and French colonies in northeastern South America, and Brazil, which belonged to Portugal. The Spanish concentrated on conquest, unlike the Portuguese who focused on trading. They eventually developed a vast colonial empire, in contrast to the Portuguese who ruled a few islands and coastal cities along the Indian Ocean. When Spain and Portugal were united under King Philip II of Spain , their combined empire was the largest on earth.

In 1522 the fleet of Ferdinand Magellan returned to Spain. The survivors were the first ever to sail all the way around the world.

Britain, France, and the Netherlands

In the 17th century, political and religious wars with Britain, France, and the Netherlands weakened the Iberian Peninsula. These three nations emerged as the main winners of the wars and became major powers like Spain and Portugal. In the next two centuries, the world became a battlefield of the three nations. Britain and France held land in North America, in India and other distant places. The Dutch colonized smaller parts of the Americas, took the former Portuguese trading centers around the Indian Ocean, and conquered Indonesia. These three new great powers also had influence all around the world.

Eventually, the result was a series of wars that were fought both in Europe and overseas, with Britain emerging victorious. The British took the former land of French Canada and India in the 18th century. They seized power in the Indian Ocean and defeated the Dutch navy. By 1763, the British Empire had become the second global empire after Spain. However, in 1776, thirteen colonies of British America declared independence. With help from the French, Dutch and Spanish, they defeated Britain in the American Revolution.

Exploration of the Southern Pacific Ocean

In 1778, Captain James Cook of Britain sailed across the South Pacific Ocean looking for a mysterious continent in the Southern Hemisphere. He landed on two large islands. Then he sailed west and found a bigger piece of land. The first, was modern New Zealand; the second was Australia. Captain Cook claimed these lands for Britain. He then explored the Pacific world for another year and died in a fight with the Hawaiians.

Effects of the Age of Discovery

Many slaves brought from Africa were brought to the Americas which was claimed to be found by Christopher Columbus himself. In conclusion, the Portuguese were weakened after the Dutch rose in the Indian Ocean trade route. Spain gained almost all of Latin America and a massive amount of silver.

When Christopher Columbus tried to find a new trade route to Asia, he thought that he could travel around the world. Instead, he had found a New World. Vikings had briefly visited Vinland around 1000 A.D.

Interesting facts about the Age of Discovery

All content from Kiddle encyclopedia articles (including the article images and facts) can be freely used under Attribution-ShareAlike license, unless stated otherwise. Cite this article:
Age of Discovery Facts for Kids. Kiddle Encyclopedia.