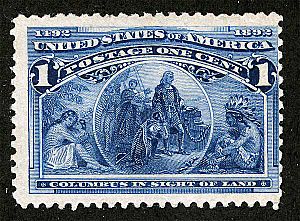 "Columbus in Sight of Land", depicted in the 1¢ Columbian postage stamp 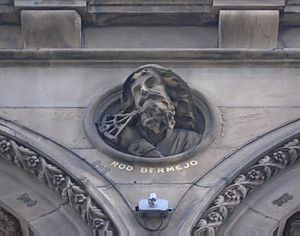 Relief of de Triana on the front of the Hargreaves Building, Liverpool

Rodrigo de Triana (born 1469 in Lepe, Huelva, Spain) was a Spanish sailor, believed to be the first European since Leif Ericson to have seen the Americas. Born as Juan Rodríguez Bermejo, Triana was the son of hidalgo and potter Vicente Bermejo and Sereni Betancour.

On October 12, 1492, while on Christopher Columbus' ship La Pinta, he sighted a land that was called Guanahani by the natives.

After spotting the Bahamian island at approximately two o'clock in the morning, he is reported to have shouted "Tierra! Tierra!" (Land! Land!). Columbus claims in his journal that he saw a light "like a little wax candle rising and falling" four hours earlier, "but it was so indistinct that he did not dare to affirm it was land." Rodrigo had spotted a small island in the Lucayas archipelago (known today as the Bahamas), in the Caribbean Sea. The island was named by Christopher Columbus as San Salvador, in honour of Jesus Christ and the salvation that finding land implied after that long journey.

After his return to Spain, Triana sailed to Africa.

All content from Kiddle encyclopedia articles (including the article images and facts) can be freely used under Attribution-ShareAlike license, unless stated otherwise. Cite this article:
Rodrigo de Triana Facts for Kids. Kiddle Encyclopedia.