João Gonçalves Zarco (c. 1390 – 21 November 1471) was a Portuguese explorer who established settlements and recognition of the Madeira Islands, and was appointed first captain of Funchal by Henry the Navigator. 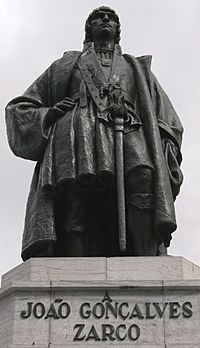 A statue of Zarco stands on the Avenida Arriaga, one of the main streets in the Madeiran capital of Funchal.

Zarco was born in Portugal, and became a knight at the service of Prince Henry the Navigator's household. In his service at an early age, Zarco commanded the caravels guarding the coast of Algarve from the incursions of the Moors, was at the conquest of Ceuta, and later led the caravels that recognized the island of Porto Santo in 1418 to 1419 and afterward, the island of Madeira 1419 to 1420. He founded the city of Câmara de Lobos. He was granted, as hereditary leader (Capitania), half the island of Madeira (the Capitania of Funchal, being its first Captain-major). Together with his fellow fleet commanders, Tristão Vaz Teixeira and Bartolomeu Perestrelo, he started the colonization of the islands in 1425. In his role of knight of Prince Henry's house he participated in the siege of Tangier, in 1437, which ended in failure. He died at Funchal.

He married Constança Rodrigues, daughter of Rodrigo Lopes de Sequeiros (?) and wife, and had:

There are discussions as to whether João Gonçalves Zarco could have been of Jewish Converso origin. Zarco was a prominent Jewish family from Santarém and Lisbon. Mossé Zarco was King João II's tailor. There was also a Portuguese doctor named Joseph Zarco, whom some authors claim to be Joseph Ibn Sharga, the great kabbalist, and a sixteenth-century poet named Yehuda Zarco. Augusto Mascarenhas Barreto suggested that Christopher Columbus could have been of Jewish descent from Portugal and his real name was Salvador Fernandes Zarco. Isabel Violante Pereira also attributes Jewish ancestry to João Gonçalves Zarco.

All content from Kiddle encyclopedia articles (including the article images and facts) can be freely used under Attribution-ShareAlike license, unless stated otherwise. Cite this article:
João Gonçalves Zarco Facts for Kids. Kiddle Encyclopedia.