The Algarve (from Arabic: الغرب al-Gharb "the West") is the southernmost region of continental Portugal. The capital of the Algarve is the city of Faro. There is an international airport and a public university (University of Algarve).

The present region of Algarve coincides with the old province of the same name and with the Faro district. The main economic activity in the region is tourism because its beaches and its historical buildings.

The name Algarve comes from Gharb Al-Andalus (Arabic: غرب الأندلس, gharb al-ʼandalus; "The West of Al-Andalus"), or just Al-Gharb (Arabic: الغرب, al-gharb; "The West"), the name given by the Muslims of Iberia to the region to the west of Andalusia.

Algarve has an area of 744.57 km2 (287.48 sq mi). It borders with the Alentejo region (Alentejo Litoral and Baixo Alentejo subregions) to the north, the Atlantic Ocean to the west and south, and the Guadiana river, and Andalusia (Spain), to the east.

The Algarve region is divided in two zones, each with eight municipalities:

The westernmost point of the region, and of continental Europa, is Cape St. Vincent (Portuguese: Cabo de São Vicente), in the municipality of Vila do Bispo.

Algarve is formed by 16 municipalities (or concelhos) and 67 freguesias. 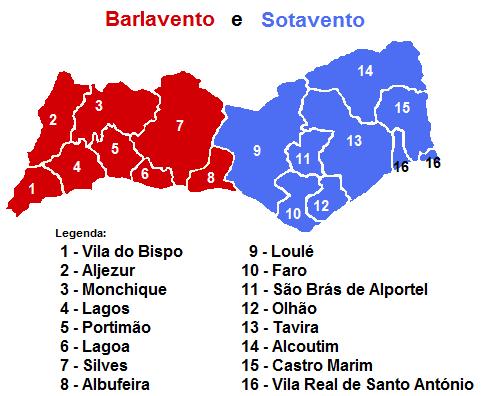 Only three municipalities do not border the ocean: Monchique, São Brás de Alportel and Alcoutim.

Farming products of the region include fig, almond, orange, carob bean, strawberry tree and cork oak. Horticulture is also important. Fishing and aquaculture are important activities in the coastal area of Algarve.

The wines of the region are well-known. There are four wines in the region which have Protected Designation of Origin (Denominação de Origem Controlada – DOC): Lagoa DOC, Lagos DOC, Portimão DOC and Tavira DOC.

Food processing, cement and construction, are the main industries.

Tourism related activities are extensive and make the bulk of Algarve's economy during summer time.

All content from Kiddle encyclopedia articles (including the article images and facts) can be freely used under Attribution-ShareAlike license, unless stated otherwise. Cite this article:
Algarve Facts for Kids. Kiddle Encyclopedia.