Arbutus unedo, the strawberry tree, is an evergreen shrub or small tree in the flowering plant family Ericaceae, native to the Mediterranean region and western Europe north to western France and Ireland. Due to its presence in southwest and northwest Ireland, it is known as either "Irish strawberry tree", or cain or cane apple (from the Irish name for the tree, caithne), or sometimes Killarney strawberry tree.

Despite the name "strawberry tree", it is not closely related to the common strawberry plant (Fragaria × ananassa).

Arbutus unedo was one of the many species described by Carl Linnaeus in Volume One of his landmark 1753 work Species Plantarum, giving it the name it still bears today.

A study published in 2001 which analyzed ribosomal DNA from Arbutus and related genera found Arbutus to be paraphyletic, and A. unedo to be closely related to the other Mediterranean Basin species such as A. andrachne and A. canariensis and not to the western North American members of the genus.

Arbutus unedo and A. andrachne hybridise naturally where their ranges overlap; the hybrid has been named Arbutus × andrachnoides (syn. A. × hybrida, or A. andrachne × unedo), inheriting traits of both parent species, though fruits are not usually borne freely, and as a hybrid is unlikely to breed true from seed. It is sold in California as Arbutus x Marina named for a district in San Francisco where it was hybridized. 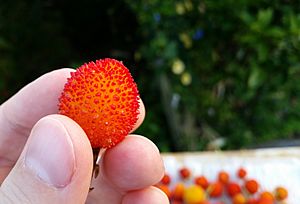 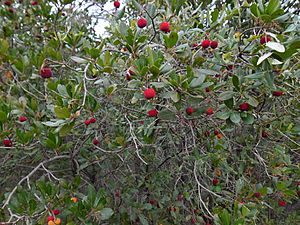 Ripe and unripe fruits and flowers 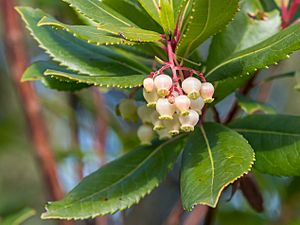 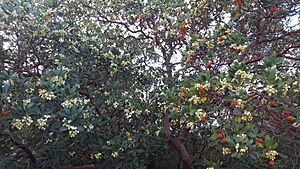 Arbutus tree near Bayda in Libya 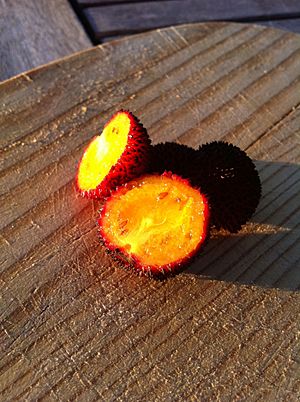 The hermaphrodite flowers are white (rarely pale pink), bell-shaped, 4–6 mm (0.16–0.24 in) diameter, produced panicles of 10–30 together in autumn. They are pollinated by bees, and have a mild sweet scent.

The fruit is a red berry, 1–2 cm (0.39–0.79 in) diameter, with a rough surface. It matures in about 12 months, in autumn, at the same time as the next flowering. It is edible; the fruit is sweet when reddish. Seeds are often dispersed by frugivorous birds.

Arbutus unedo is widespread in the Mediterranean region: in Portugal, Spain and southeastern France; southward in Algeria, Morocco, Libya, and Tunisia, and eastward in Italy, Slovenia, Croatia, Greece, Turkey, Lebanon, Syria, Palestine, and Israel. It is also found in western France, Albania, Bulgaria and southwestern Ireland.

Its disjunct distribution, with an isolated relict population in southwestern and northwestern Ireland, notably in Killarney and around Lough Gill in County Sligo, which is its most northerly stand in the world, is a remnant of former broader distribution during the milder climate of the Atlantic period, the warmest and moistest Blytt-Sernander period, when the climate was generally warmer than today. The red-flowered variant, named A. unedo rubra by William Aiton in 1785, was discovered growing wild in Ireland in 1835.

Arbutus unedo is quite an easy plant to cultivate, and is adaptable to many climates. Once established it is fairly drought resistant, frost resistant, shade tolerant and salt tolerant.

Lower production of fruit mass has however been reported in case of summer droughts, and frosts in flowering time were seen to decrease the numbers of fruits.

Arbutus unedo is naturally adapted to dry summer climates, and has become a very popular ornamental plant in California and the rest of the west coast of North America. It can grow easily in USDA hardiness zone 7 or warmer.

It also grows well in the cool, wet summers of western Ireland and England, and temperate regions of Europe and Asia. Pests include scales and thrips, and diseases include anthracnose, Phytophthora, root rot, and rust.

Unlike most of the Ericaceae, A. unedo grows well in basic (limy) pH soils, even though it does better in more acidic soils.

The fruit production is not very high and is highly variable on the weather, and that may be part of the reason this plant is not much cultivated. The average yield in a two years study is around 46 kg per hectare, and 180 grams per cubic metre of crown. However, very little work has so far been done in terms of genotype selection.

Arbutus unedo has been seen to form a mycorrhizal relationship. Inoculation with Pisolithus tinctorius has shown to greatly improve the plant's root mass, size, tolerance to drought and nutritional status.

In cultivation in the UK, the form A. unedo f. rubra and the cultivar ‘Atlantic’ have gained the Royal Horticultural Society’s Award of Garden Merit

Propagation can be done via seed, layering, or cutting.

The seed should undergo a one month cold stratification period, then soaked for 5 to 6 days in warm water to improve germination success. Seedlings are prone to damp, and should be cared for in the first year.

Germination rate is low, rarely over 20%.

Layering can take up to two years, but has a good success rate, while cutting is done with a 15–20 cm (5.9–7.9 in) long mature wood, preferably with a heel in November to December. The success rate however is not very high. 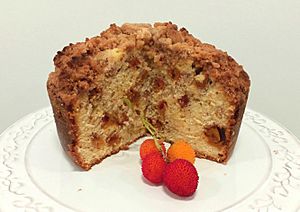 Arbutus unedo's fruits have a high content of sugars (40%), and antioxidant vitamins such as vitamin C, beta-carotene, niacin, tocopherols, and organic acids that are precursors to omega-3 and omega-6 fatty acids (nearly 9%). They are edible fresh, but that is an uncommon consumption, especially because the mature fruit tends to bruise very easily, making transportation difficult.

They are used mostly for jam, marmalades, yogurt and alcoholic beverages, such as the Portuguese medronho, a type of strong brandy. Many regions of Albania prepare the traditional drink rakia from the fruits of the plant (mare or kocimare in Albanian), hence comes the name of the drink "raki kocimareje". In order to reduce the high content of methanol in the drink, the spirit is distilled twice.

The flowers are pollinated by bees, and the resulting honey is bitter tasting but still considered a delicacy.

Arbutus unedo's leaves have been employed in traditional and folk medicine in the form of a decoction having the following properties: astringent, diuretic, urinary anti-septic, antiseptic, intoxicant, rheumatism, tonic, and more recently, in the therapy of hypertension and diabetes.

The leaves are reported to have a high concentration of flavonol antioxidants, especially quercitin, best extracted with a decoction, and together with the fruits are a source of antioxidants.

The leaves also have anti-inflammatory properties

In landscape design, ecosystem restoration or permaculture based designs, A. unedo can have many purposes. While the ornamental one is the most common, this can be a valuable plant also for restoring degraded ecosystems and preventing desertification. Being a pioneer plant and growing well also in poor soils, can be used in a wide array of situations. 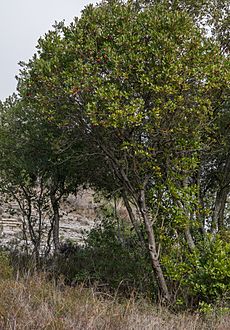 Its Mediterranean habitat, elegant details of leaf and habit and dramatic show of fruit with flowers made Arbutus unedo notable in Classical Antiquity, when it was called Andrachne, and for which Theophrastos (4th c. BCE) wrote about it, as well as the ancient army medical herbalist Pedanios Dioscorides [De Materia Medica, Book II-150]; in addition, Pliny thought it should not be planted where bees are kept, for the bitterness it imparts to honey.

The first evidence of its importation into northern European gardens was to 16th-century England from Ireland. In 1586 a correspondent in Ireland sent plants to the Elizabethan courtiers Lord Leicester and Sir Francis Walsingham. An earlier description by Rev. William Turner (The Names of Herbes, 1548) was probably based on hearsay. The Irish association of Arbutus in English gardens is reflected in the inventory taken in 1649 of Henrietta Maria's Wimbledon: "one very fayre tree, called the Irish arbutis standing in the midle parte of the sayd kitchin garden, very lovely to look upon" By the 18th century Arbutus unedo was well known enough in English gardens for Batty Langley to make the bold and impractical suggestion that it might be used for hedges, though it "will not admit of being clipped as other evergreens are."

In the United States, Thomas Jefferson lists the plant in his Monticello gardens in 1778.

The form A. unedo f. rubra and the hybrid A. × andrachnoides, have gained the Royal Horticultural Society's Award of Garden Merit. Central panel of The Garden of Earthly Delights by Hieronymus Bosch, described by José de Sigüenza as "The Picture of the Strawberry Tree". 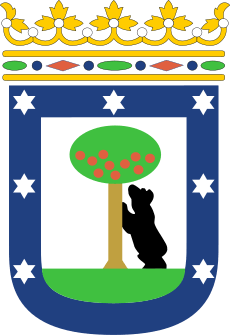 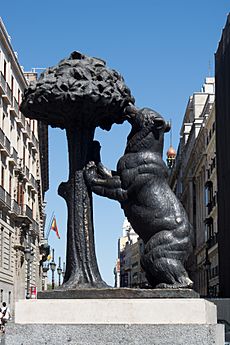 Statue of the Bear and the Strawberry Tree, Madrid

The tree is mentioned by Roman poet Ovid, in Book I: 89–112 "The Golden Age" of his Metamorphoses: "Contented with food that grew without cultivation, they collected mountain strawberries and the fruit of the strawberry tree, wild cherries, blackberries clinging to the tough brambles, and acorns fallen from Jupiter’s spreading oak-tree."

The name of the Italian promontory Mount Conero, situated directly south of the port of Ancona on the Adriatic Sea, derives from the Greek name κόμαρος (komaròs) indicating the strawberry tree which is common on the slopes of the mountain. Mount Conero, the only coastal high point on the Adriatic sea between Trieste and the Gargano massif in the region of Apulia, assists navigators to sail across the Adriatic sea since ancient times.

The Garden of Earthly Delights, a painting by Hieronymus Bosch, was originally listed by José de Sigüenza, in the inventory of the Spanish Crown as La Pintura del Madroño – "The Painting of the Strawberry Tree".

The tree makes up part of the Coat of arms of Madrid (El oso y el madroño, The Bear and the Strawberry Tree) of the city of Madrid, Spain. In the center of the city (Puerta del Sol) there is a statue of a bear eating the fruit of the Madroño tree. The image appears on city crests, taxi cabs, man-hole covers, and other city infrastructure. The fruit of the Madroño tree ferments on the tree if left to ripen, so some of the bears become drunk from eating the fruits. 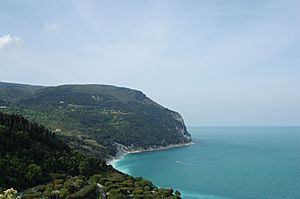 Mount Conero, whose name is derived from the Greek κόμαρος (komaròs) and indicates the strawberry tree which is common on the slopes of the mountain.

The strawberry tree (Italian: albatro, arbuto) began to be considered one of the national symbols of Italy in the 19th century, during the Italian unification, because with its autumn colors is reminiscent of the flag of Italy (green for its leaves, white for its flowers and red for its berries).

For this reason the poet Giovanni Pascoli dedicated a poem to the strawberry tree. He refers to the Aeneid passage in which Pallas, killed by Turnus, was posed on branches of a strawberry tree. He saw in the colours of that plant a prefiguration of the flag of Italy and considered Pallas the first national cause martyr. Pascoli's ode says:

Oh green Italian tree, your May month
is in the mist: if everything die,
you, the youthful wild banner
unfold to the northern wind

All content from Kiddle encyclopedia articles (including the article images and facts) can be freely used under Attribution-ShareAlike license, unless stated otherwise. Cite this article:
Strawberry tree Facts for Kids. Kiddle Encyclopedia.