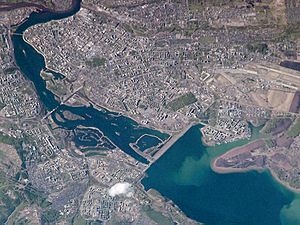 The town proper lies at the Angara, a tributary of the Yenisei, 45 miles below its outflow from Lake Baikal, and on the opposite bank is the suburb of Glaskovsk. The river, which has a breadth of 1900 ft. (579 m), is crossed by a flying bridge. The Irkut River, from which the town takes its name, is a small river which joins the Angara directly opposite the town, the main portion of which is separated from the monastery, the fort, the port and the suburbs by another tributary, the Ida or Ushakovka.

Irkutsk grew out of the winter quarters established (1652) by Ivan Pokhabov for the collection of the fur tax from the Buryats. Its existence as a town dates from 1686.

In the early nineteenth century, many Russian artists, officers and nobles were sent into exile to Siberia for their part in the Decembrist revolt against Tsar Nicholas I. Irkutsk became the major center of intellectual and social life for these exiles, and much of the city's cultural heritage comes from them; also, many of their wooden houses, adorned with ornate, hand-carved decorations, survive today in stark contrast with the standard Soviet apartment blocks that surround them.

The 662.4 MW Irkutsk Hydroelectric Power Station was the first cascade hydroelectric power station in the Irkutsk region. The construction of the dam started in 1950 and finished in 1958.

The largest industry in Irkutsk is Irkut, the Irkutsk Aviation Industrial Association, which was set up in 1932 in the Transbaykal region of the Soviet Union. It is best known as being the manufacturer of the Su-30 family of interceptor/ground-attack aircraft. The Russian government has merged Irkut with Ilyushin, Mikoyan, Sukhoi, Tupolev, and Yakovlev into a new company named United Aircraft Building Corporation.

There is the Irkutsk Aluminium Smelter which belongs to the Rusal Company.

All content from Kiddle encyclopedia articles (including the article images and facts) can be freely used under Attribution-ShareAlike license, unless stated otherwise. Cite this article:
Irkutsk Facts for Kids. Kiddle Encyclopedia.