He was born in Irkutsk in Siberia. Ivanishin is married to Svetlana Ivanishina. They have one son, Vladislav Ivanishin, born in 1993. His father is Alexey Ivanishin and his mother is Nina Ivanishina.

In 1986 Ivanishin finished secondary school education from Irkutsk. In 1986 he unsuccessfully attempted to enter the Chernigov Higher Military Aviation School for Pilots. He entered the Irkutsk Polytechnic Institute, and in 1987 completed his first year. In his second attempt Ivanishin entered the Chernigov Higher Military Aviation School in 1987, and in 1991 graduated with a gold medal. In 2003 Ivanishin graduated from the Moscow State University in Economics, Statistics and Information Theory. 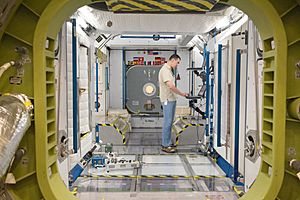 Since 1991, Ivanishin has served in combatant units of the Russian Air Force. After graduating from the Chernigov Higher Military Aviation School, he served in the Borisoglebsk military unit, Voronezh region, where Ivanishin flew MiG-29 jet fighter planes. Since 1992, he served as a senior fighter pilot in the 159th Fighter Aviation Regiment based in Petrozavodsk, Karelia, part of the 6th Air Army. During the service he flew Su-27 jet fighter aircraft. He has logged 507 hours of flying time and has successfully made 180 parachute jumps.

On 29 May 2003, Ivanishin was enlisted as a cosmonaut candidate to go through space training. On 16 June 2003, he began training and passed the state examinations with a rating of "excellent" on 28 June 2005. On 5 July 2005, Ivanishin was awarded the test cosmonaut qualification. 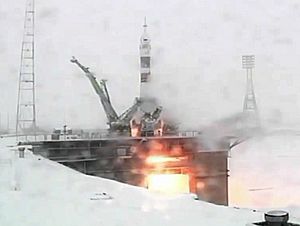 The launch of Soyuz TMA-22 in blizzard conditions 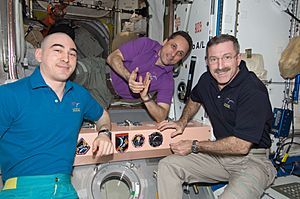 On 14 November 2011, Ivanishin launched on his first flight into space as flight engineer on board Soyuz TMA-22 alongside Roscosmos cosmonaut Anton Shkaplerov and NASA astronaut Daniel Burbank, the three successfully arrived at the space station on 16 November following a two-day free flight to the ISS. They officially joined Roscosmos cosmonaut Sergey Volkov, JAXA astronaut Satoshi Furukawa and NASA astronaut Mike Fossum as members of the Expedition 29 crew. The Expedition ended only days later with the departure of Soyuz TMA-02M on 21 November 2011, carrying Volkov, Furukawa and Fossum back to Earth, following which Burbank took command of the station for Expedition 30.

The three were soon joined by Roscosmos cosmonaut Oleg Kononenko, Dutch ESA astronaut André Kuipers and NASA astronaut Donald Pettit, who launched aboard Soyuz TMA-03M on 21 December 2011. On 16 February 2012, Ivanishin supported a spacewalk by his fellow cosmonauts, Shaklperov and Kononenko, who performed a six-hour, 15-minute EVA from the Pirs airlock module on the Russian segment of the ISS. The two set up several experiments on the outside of the station and moved a Strela crane from Pirs to the Poisk module while Burbank and Ivanishin remained inside Soyuz TMA-22 in case of an emergency.

Due to a delay with the launch of the Expedition 31/32 crew on board Soyuz TMA-04M, the landing of Soyuz TMA-22 was delayed from March to late April 2012. Ivanishin, along with Shakleprov and Burbank, landed safely in Kazakhstan on 27 April, wrapping up his first spaceflight after 165 days in orbit. 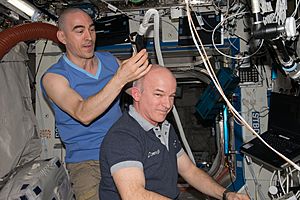 Ivanishin, alongside JAXA astronaut Takuya Onishi and NASA astronaut Kathleen Rubins launched into space on board Soyuz MS-01 on 7 July 2016, following a delay from 24 June due to issues with the spacecraft software. The trio spent two days in orbit testing various new systems on the Soyuz MS spacecraft, before rendezvous and docking with the ISS on 9 July, officially becoming members of the Expedition 48 crew alongside NASA astronaut Jeff Williams and Russian cosmonauts Aleksey Ovchinin and Oleg Skripochka. 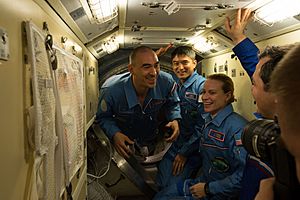 Expedition 48 officially ended on 6 September 2016 with the departure of Soyuz TMA-20M, following which Ivanishin took Command of the station for Expedition 49. They were supposed to be joined by the three crew members on Soyuz MS-02 on 25 September, although continuing issues with the introduction of the Soyuz MS spacecraft forced the launch of MS-02 to be delayed due to technical reasons. Soyuz MS-02 was successfully launched on 19 October 2016, carrying Roscosmos cosmonauts Sergey Ryzhikov and Andrei Borisenko as well as NASA astronaut Shane Kimbrough to the station. They arrived on 21 October and joined Ivanishin and his crew.

Following a very short period of six crew operations with the crew of Soyuz MS-02, Ivanishin handed over command of the station to Kimbrough, following which he returned to Earth with his two crewmates on 29 October 2016 following 115 days in space, bringing up Ivanishin's total time in orbit to 280 days.

Ivanishin was assigned to back up Russian Soyuz Commander Nikolai Tikhonov for the mission of Soyuz MS-16, scheduled for launch in April 2020. However, in February 2020 Tikhonov and Russian Flight Engineer Andrei Babkin were removed from the flight due to a temporary health condition with Tikhonov. Subsequently, Ivanishin and Ivan Vagner (Babkin's backup) were moved forward onto the prime crew. 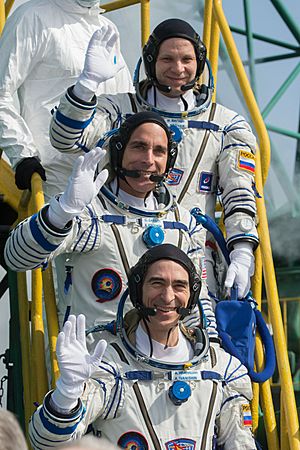 Ivanishin, Cassidy and Vagner prior to launch.

Ivanishin launched aboard Soyuz MS-16, along with Vagner and NASA astronaut Christopher Cassidy, on 9 April 2020. The trio successfully arrived in orbit and docked with the ISS six hours later, officially joining the Expedition 62 crew alongside Roscosmos cosmonaut Oleg Skripochka and NASA astronauts Jessica Meir and Andrew R. Morgan. Following just eight days of six-person operations, Morgan, Meir and Skripochka departed the space station aboard Soyuz MS-15, following which Ivanishin and his two crewmates transferred over to Expedition 63, with Cassidy taking command of the station. 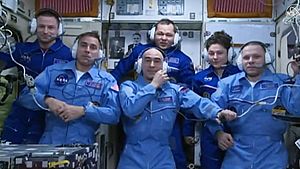 The Expedition 63 crew welcomed the Crew Dragon Demo-2 mission for a stay on board the station on 31 May 2020. This flight marked the first crewed test flight of SpaceX Crew Dragon spacecraft and the first crewed spacecraft to launch from US soil since STS-135, the final flight of the Space Shuttle program, in 2011. The mission was crewed by NASA astronauts Doug Hurley and Robert Behnken, who are scheduled to remain on board the ISS for two to three months. The Expedition 63 crew are also scheduled to be on the ISS for the arrival of SpaceX Crew-1, the second crewed flight of Crew Dragon and the first operational mission of NASA's Commercial Crew Program, and the Second Orbital Flight Test of Boeing's CST-100 Starliner spacecraft.

All content from Kiddle encyclopedia articles (including the article images and facts) can be freely used under Attribution-ShareAlike license, unless stated otherwise. Cite this article:
Anatoly Ivanishin Facts for Kids. Kiddle Encyclopedia.