Anton Nikolaevich Shkaplerov (Russian: Антон Николаевич Шкаплеров; born 20 February 1972) is a Russian cosmonaut. He is a veteran of three spaceflights and is a former Commander of the International Space Station.

Shkaplerov is married to Tatyana Petrovna, and they have two daughters named Kristina and Kira. His parents, Nikolay Ivanovich Shkaplerov and Tamara Viktorovna Shkaplerova, live in Sevastopol. His hobbies include sports, travel, fishing, and golf.

Shkaplerov completed Yak-52 flight training at the Sevastopol Aviation Club in 1989. After graduation from Sevastopol High School in 1989, he entered the Kachinsk Air Force Pilot School graduating in 1994 as pilot-engineer. In 1997, he graduated from the N. E. Zukovskiy Air Force Engineering.

After graduation Shkaplerov served as a senior pilot-instructor in the Russian Air Force. He has piloted Yak-52, L-29 and MiG-29 aircraft. He is a Class 2 Air Force pilot-instructor. He is also an Instructor of General Parachute Training, and has performed more than 300 parachute jumps. 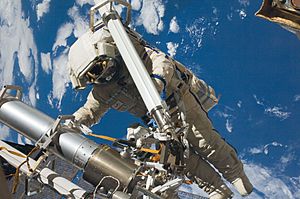 Shkaplerov participates in a session of EVA in February 2012.

In May 2003, Shkaplerov was selected as a test-cosmonaut candidate of the Gagarin Cosmonaut Training Center Cosmonaut Office. From June 2003 to June 2005, he attended basic space training and was qualified as a test cosmonaut in 2005.

From April–October 2007, Shkaplerov served as Director of Operations, Russian Space Agency, stationed at the Johnson Space Center in Houston, Texas.

Anton was assigned as the back-up commander for Expedition 22.

Shkaplerov served as a Flight Engineer for Expedition 29/30 aboard the ISS. He was the Commander of Soyuz TMA-22 and launched with flight engineers Anatoli Ivanishin and Dan Burbank on November 16, 2011. After 2 days in orbit they docked with the ISS, to begin Expedition 29/30. On February 12, 2012, Shkaplerov and fellow cosmonaut Oleg Kononenko conducted a six-hour spacewalk outside the ISS. They installed shields on the Zvezda Service Module to protect it from micrometeoroid orbital debris and move the Strela 1 crane from the Pirs docking compartment to the Poisk Mini Research Module (MRM-2). The duration was 6 hours 15 minutes. They spent 165 days in space before undocking and returning to Earth on April 27, 2012. 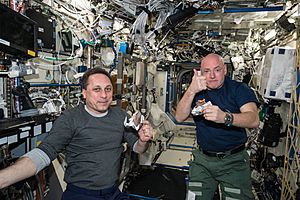 Shkaplerov (left) pictured alongside Scott Kelly in the Destiny laboratory

On November 23, 2014, Shkaplerov commanded Soyuz TMA-15M alongside Flight engineers Samantha Cristoforetti and Terry Virts from the Baikonur Cosmodrome. It successfully docked at the International Space Station roughly six hours later and the crew joined the Expedition 42 crew which consisted of Commander Barry Wilmore and Flight Engineers Aleksandr Samokutyayev and Yelena Serova. The crew spent 199 days in space before returning to Earth on June 11, 2015. Shkaplerov's total time in space was brought to 365 days.

Shkaplerov was launched on into space on board Soyuz MS-07 on 17 December 2017 07:21 UTC, with NASA astronaut Scott Tingle and Norishige Kanai of JAXA. He was the flight engineer of Expedition 54 and commander of Expedition 55.

On February 2, 2018, Shkaplerov along with Expedition 54 Commander Alexander Misurkin participated in an 8-hour 13 minutes spacewalk outside of the ISS to replace an old electronics box for a high-gain communications antenna. At completion, the two cosmonauts set a new record for the longest Russian spacewalk to date.

All content from Kiddle encyclopedia articles (including the article images and facts) can be freely used under Attribution-ShareAlike license, unless stated otherwise. Cite this article:
Anton Shkaplerov Facts for Kids. Kiddle Encyclopedia.