Innocent of Alaska facts for kids

Saint Innocent of Alaska (August 26, 1797 – March 31, 1879, O.S.), also known as Saint Innocent Metropolitan of Moscow (Russian: Святитель Иннокентий Митрополит Московский) was a Russian Orthodox missionary priest, then the first Orthodox bishop and archbishop in the Americas, and finally the Metropolitan of Moscow and all Russia. Remembered for his missionary work, scholarship, and leadership in Alaska and the Russian Far East during the 19th century, he is known for his abilities as a scholar, linguist, and administrator, as well as his great zeal for his work.

As a missionary priest he took his wife and family with him. In these territories he learned several languages and dialects of the indigenous peoples. He wrote many of the earliest scholarly works about the native peoples of Alaska, including dictionaries and grammars for their languages for which he devised writing systems; also, he wrote religious works in, and translated parts of the Bible into, several of these languages. His books were published beginning in 1840.

Saint Innocent was born Ivan Evseyevich Popov (Иван Евсеевич Попов) on August 26, 1797 into the family of a church server in the village of Anginskoye, Verkholensk District, Irkutsk Province, in Russia. His father, Evsey Popov, died when Ivan was six, and Ivan lived with his uncle, the parish deacon, in Anga. In 1807 at age 10, Ivan entered the Irkutsk Theological Seminary, where the rector renamed him Veniaminov in honor of the recently deceased Bishop Veniamin of Irkutsk.

In 1817, he married a local priest's daughter named Catherine. On May 18 that year, Ivan Veniaminov was ordained a deacon of the Church of the Annunciation in Irkutsk.

After completing his studies in 1818, Veniaminov was appointed a teacher in a parish school. On May 18, 1821 he was ordained a priest to serve in the Church of the Annunciation in Irkutsk. In Russian he was known as Father Ioann, the religious version of Ivan.

At the beginning of 1823, Bishop Michael of Irkutsk received instructions to send a priest to the island of Unalaska in the Aleutian Islands of Alaska. Father Ioann Veniaminov volunteered to go and on May 7, 1823 he departed from Irkutsk, accompanied by his aging mother, his brother Stefan, his wife, and their son, Innocent, an infant. After a difficult yearlong journey by land and water, they arrived at Unalaska on July 29, 1824.

After Father Ioann and his family built and moved into an earthen hut, he set about studying the local languages and dialects. He trained some of his new parishioners in Russian building techniques. With them he undertook the construction of Holy Ascension Church, which was finished the following July. 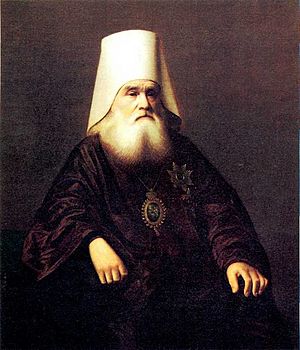 St. Innocent as Metropolitan of Moscow.

Father Ioann's parish included the island of Unalaska and the neighboring groups of Fox and Pribilof islands, occupied by indigenous people who had been converted to Christianity before his arrival. They also retained many of their earlier religious beliefs and customs. Father Ioann often traveled between the islands in a canoe, battling the stormy ocean in the Gulf of Alaska.

By his travels through the islands, Father Ioann Veniaminov became familiar with the local dialects. In a short time he mastered six of the dialects. He devised an alphabet using Cyrillic letters for the most widely used dialect, the Unangan dialect of Aleut. In 1828, he translated portions of the Bible and other church material into that dialect. In 1829, he journeyed to the Bering Sea coast of the Alaskan mainland and preached to the people there.

In 1834, Father Ioann was transferred to Sitka Island, to the town of Novoarkhangelsk, later called Sitka. He devoted himself to the Tlingit people and studied their language and customs. From his studies there, he wrote the scholarly works Notes on the Kolushchan and Kodiak Tongues and Other Dialects of the Russo-American Territories, with a Russian-Kolushchan Glossary. 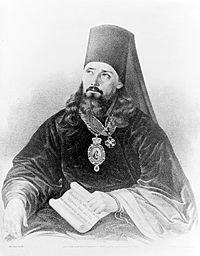 In 1838, Father Ioann journeyed to St. Petersburg (where on Christmas Day 1839 he was promoted to archpriest), Moscow and Kiev to report on his activities and request an expansion of the Church's activities in Russian America. While he was there, he received notice that his wife had died during her visit to Irkutsk. He requested permission to return to his hometown. Instead, church officials suggested that he take vows as a monk. Father Ioann at first ignored these suggestions, but, on November 29, 1840, he was tonsured a monk with the name Innocent in honor of Saint Innocent, the first bishop of Irkutsk (†1731, commemorated on November 26). He was elevated to the rank of Archimandrite.

On December 15, 1840, Archimandrite Innocent was consecrated Bishop of Kamchatka and Kuril Islands in Russia and the Aleutian Islands in Russian America. His see was located in Novoarkhangelsk (Sitka), to which he returned in September 1841. He spent the next nine years administering his diocese as well as taking several long missionary journeys to its remote areas.

On April 21, 1850, Bishop Innocent was elevated to Archbishop. In 1852 the Yakut area was admitted to the Kamchatka Diocese. In September 1853 Archbishop Innocent took up permanent residence in the town of Yakutsk. Innocent took frequent trips throughout his enlarged diocese. He devoted much energy to the translation of the scriptures and service books into the Yakut (Sakha) language.

In April 1865 Archbishop Innocent was appointed a member of the Holy Governing Synod of the Russian Orthodox Church.

On November 19, 1867, he was appointed the Metropolitan of Moscow, succeeding his friend and mentor, Saint Filaret, who had died. As metropolitan, he undertook revisions of many church texts that contained errors, raised funds to improve the living conditions of impoverished priests, and established a retirement home for clergy. 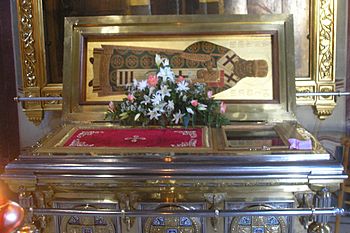 The relics of Saint Innocent of Alaska (reliquary/coffin at the bottom and his icon on the opened lid at the top) in the Assumption Cathedral at the Trinity-Sergius Monastery in Sergiyev Posad, Russia

On October 6 [O.S. September 23] 1977 the Russian Orthodox Church, acting on the official request of the Orthodox Church in America, glorified (canonized) Innocent as a saint, giving him the title "Enlightener of the Aleuts, Apostle to America."

Innocent's feast day is celebrated by the Orthodox Church three times a year: March 31, the date of his repose according to the Julian Calendar (April 13 N.S.); October 6, the anniversary of his canonization (September 23 O.S.); and October 18, the Synaxis of the Moscow Hierarchs (October 5 O.S.).

Innocent is widely venerated as Equal-to-apostles as the Orthodox apostle of America.

On the liturgical calendar of the Episcopal Church (USA), Innocent is honored with a feast day on March 30.

All content from Kiddle encyclopedia articles (including the article images and facts) can be freely used under Attribution-ShareAlike license, unless stated otherwise. Cite this article:
Innocent of Alaska Facts for Kids. Kiddle Encyclopedia.