Kids Encyclopedia Facts
Not to be confused with Fox Island (Alaska).

The Fox Islands (Russian: Лисьи острова) are a group of islands in the eastern Aleutian Islands of the U.S. state of Alaska. The Fox Islands are the closest to mainland North America in the Aleutian chain, and just east of Samalga Pass and the Islands of Four Mountains group. 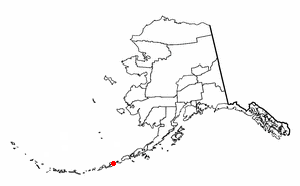 Inhabited by the Aleut for centuries, the islands, along with the rest of the Aleutians, were first visited by Europeans in 1741, when a Danish navigator employed by the Imperial Russian Navy, Vitus Bering, was searching for new sources of fur for Russian fur trappers.

Foggy almost all year round, the islands are difficult to navigate due to constantly adverse weather and numerous reefs. The Fox Islands Passes are the waterways surrounding the islands. As with the other Aleutian islands, the Fox Islands are prone to frequent earthquakes year-round.

Fox Islands is the English translation of the name given to the islands in the 18th century by Russian explorers and fur traders.

All content from Kiddle encyclopedia articles (including the article images and facts) can be freely used under Attribution-ShareAlike license, unless stated otherwise. Cite this article:
Fox Islands (Alaska) Facts for Kids. Kiddle Encyclopedia.