Aleutians East Borough () is a 2nd class borough in the U.S. state of Alaska. As of the 2020 census the borough's population was 3,420. The borough seat is Sand Point.

According to archaeological evidence, the area has been inhabited by the Unanga since the last ice age. Early contact was with Russian fur traders who sought sea otters in these islands. Whaling, fishing and cannery operations brought an influx of Scandinavian and European fishermen in the early 1900s. During World War II, the area was a strategic military site for the Aleutian Campaign, and many locals were evacuated to Ketchikan. 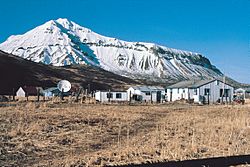 An area in the city of False Pass, Alaska, looking north.

Aleutians East Borough is located at 57° north latitude and 162° west longitude. It comprises the westernmost portion of the Alaska Peninsula, and a small number of the Aleutian Islands, from which the borough name derives. Also included are the Shumagin Islands, as well as the Pavlof Islands and the Sanak Islands. In all, about 63.9 percent of its land area comprises land on the Alaska Peninsula, while 36.1 percent is on the numerous islands. There are five incorporated cities and two unincorporated villages within the borough.

Temperatures range from -9 to 76 degrees Fahrenheit. Annual precipitation is 33 inches and annual snowfall is 52 inches.

A 2014 analysis by The Atlantic found Aleutians East Borough to be the 2nd most racially diverse county-equivalent in the United States, behind the Aleutians West Census Area.

Several airports are accessible in the Borough, and float planes can land in many communities. Marine cargo vessels also provide transportation. The State Ferry operates during the summer. Local transportation is primarily by fishing boats or skiffs, since there are no roads.

All content from Kiddle encyclopedia articles (including the article images and facts) can be freely used under Attribution-ShareAlike license, unless stated otherwise. Cite this article:
Aleutians East Borough, Alaska Facts for Kids. Kiddle Encyclopedia.