Akutan (ACK-oo-tan) (Achan-ingiiga in Aleut) is a city in Aleutians East Borough, Alaska, United States. The population was 1,027 at the 2010 census.

Akutan is located on Akutan Island in the eastern Aleutians, one of the Krenitzin Islands in the Fox Islands group. It is 35 miles (56 km) east of Unalaska, and 766 miles (1,233 km) southwest of Anchorage. Akutan lies in the maritime climate zone, resulting in mild winters and cool summers. Mean temperatures range from 22 to 55 °F (−6 to 13 °C), and precipitation averages 28 inches (710 mm) per year. High winds and storms are frequent in the winter, and fog is common in the summer.

Akutan began in 1878 as a fur storage and trading port for the Western Fur & Trading Company. The company's agent established a commercial cod fishing and processing business that quickly attracted nearby Unangan to the community. A Russian Orthodox church and a school were built in 1878, but was replaced by the St. Alexander Nevsky Chapel, built in 1918. The Pacific Whaling Company built a whale processing station across the bay from Akutan in 1912. It was the only whaling station in the Aleutians, and operated until 1939. 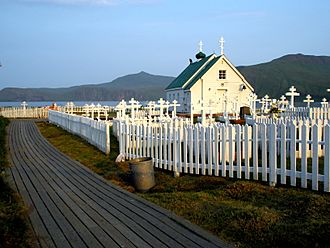 After the Japanese attacked Unalaska in June 1942, the U.S. government evacuated Akutan residents to the Ketchikan area. In June 1942, a Japanese A6M Zero fighter piloted by Tadayoshi Koga crashed on Akutan Island. It was recovered in July by the United States Army Air Force. This plane, dubbed the Akutan Zero, significantly aided American tacticians in devising dog fighting techniques to defeat the Zero, and helped change the course of the war.

The village was re-established in 1944, although many villagers chose not to return. This exposure to the outside world brought many changes to the traditional lifestyle and attitudes of the community. The City was incorporated in 1979.

A federally recognized tribe is located in the community—the Native Village of Akutan. The population of the community consists of 16.4% Alaska Native or part Native. Akutan is a fishing community, and is the site of a traditional Unangan village. Approximately 75 persons are year-round residents; the majority of the population are transient fish processing workers that live in group quarters. During the 2000 U.S. Census, total housing units numbered 38, and vacant housing units numbered 4. U.S. Census data for Year 2000 showed 97 residents as employed. The unemployment rate at that time was 83.89 percent, although 84.84 percent of all adults were not in the work force. The median household income was $33,750, per capita income was $12,259, and 45.48 percent of residents were living below the poverty level.

There were 34 households out of which 20.6% had children under the age of 18 living with them, 32.4% were married couples living together, 14.7% had a female householder with no husband present, and 47.1% were non-families. 38.2% of all households were made up of individuals and 2.9% had someone living alone who was 65 years of age or older. The average household size was 2.21 and the average family size was 3.00.

Boats and amphibious aircraft, hovercraft, or helicopter are the only means of transportation into and out of Akutan. A 200-foot (61 m) dock and a small boat mooring basin are available. Plans are underway to develop a practical way to get to a large boat harbor that has been built at the head of the bay. The State Ferry operates from Kodiak bi-monthly between May and October. Cargo is delivered weekly by freighter from Seattle; the City owns and operates a landing craft, the M/V Akutan. Akutan has no airstrip due to the steep terrain, however, a seaplane base is available and open to the public. Helicopter service between Akutan and Akun Island, the location of Akutan Airport, began in February 2014. The only airline company serving the airport is Grant Aviation, flying to nearby Dutch Harbor. The airport was expected to cost $77 million of which nearly $60 million came from the U.S. federal government. Trident paid $1 million towards the cost of the airport.

All content from Kiddle encyclopedia articles (including the article images and facts) can be freely used under Attribution-ShareAlike license, unless stated otherwise. Cite this article:
Akutan, Alaska Facts for Kids. Kiddle Encyclopedia.