The sable is a species of marten, a small carnivorous mammal primarily inhabiting the forest environments of Russia, from the Ural Mountains throughout Siberia, and northern Mongolia. Its habitat also borders eastern Kazakhstan, China, North Korea and Hokkaidō, Japan. Its range in the wild originally extended through European Russia to Poland and Scandinavia. Historically, it has been hunted for its highly valued dark brown or black fur, which remains a luxury good to this day. While hunting is still common in Russia, most fur on the market is now commercially farmed. 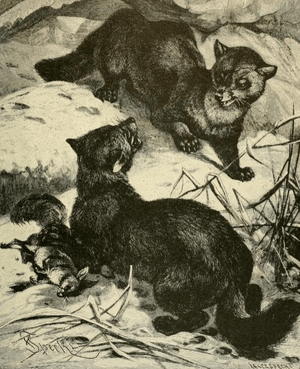 Illustration from Brehm's Life of Animals

Males measure 38–56 centimetres (15–22 in) in body length, with a tail measuring 9–12 centimetres (3.5–4.7 in), and weigh 880–1,800 grams (1.94–3.97 lb). Females have a body length of 35–51 centimetres (14–20 in), with a tail length of 7.2–11.5 centimetres (2.8–4.5 in). The winter pelage is longer and more luxurious than the summer coat. Different subspecies display geographic variations of fur colour, which ranges from light to dark brown, with individual coloring being lighter ventrally and darker on the back and legs. Japanese sables (known locally as クロテン or kuroten) in particular are marked with black on their legs and feet. Individuals also display a light patch of fur on their throat which may be gray, white, or pale yellow. The fur is softer and silkier than that of American martens.

Sables greatly resemble pine martens in size and appearance, but have more elongated heads, longer ears and proportionately shorter tails. Their skulls are similar to those of pine martens, but larger and more robust with more arched zygomatic arches.

A Japanese sable, as illustrated in The Illustrated Natural History, 1865

Sables inhabit dense forests dominated by spruce, pine, larch, cedar, and birch in both lowland and mountainous terrain. They defend home territories that may be anything from 4 to 30 square kilometres (1.5 to 11.6 sq mi) in size, depending on local terrain and food availability. However, when resources are scarce they may move considerable distances in search of food, with travel rates of 6 to 12 kilometres (3.7 to 7.5 mi) per day having been recorded.

Sables live in burrows near riverbanks and in the thickest parts of woods. These burrows are commonly made more secure by being dug among tree roots. They are good climbers of cliffs and trees. They are primarily crepuscular, hunting during the hours of twilight, but become more active in the day during the mating season. Their dens are well hidden, and lined by grass and shed fur, but may be temporary, especially during the winter, when the animal travels more widely in search of prey.

Sables are omnivores, and their diet varies seasonally. In the summer, they eat large numbers of hare and other small mammals. In winter, when they are confined to their retreats by frost and snow, they feed on wild berries, rodents, hares, and even small musk deer. They also hunt ermine, small weasels and birds. Sometimes, sables follow the tracks of wolves and bears and feed on the remains of their kills. They eat molluscs such as slugs, which they rub on the ground in order to remove the mucus. Sables also occasionally eat fish, which they catch with their front paws.

They hunt primarily by sound and scent, and they have an acute sense of hearing. Sables mark their territory with scent produced in glands on the abdomen. Predators of sable include a number of larger carnivores, such as wolves, foxes, wolverines, tigers, lynxes, eagles and large owls.

Gestation lasts 245 to 298 days and the embryonic development requires only 25–30 days. Baby sables are born in tree hollows. Litters number one to seven young, although litters of two or three are most common. Males assist females by defending their territories and providing food.

Sables are born with eyes closed and skin covered in a very thin layer of hair. Newborn cubs weigh between 25 and 35 grams (0.88 and 1.23 oz) and average 10 to 12 centimetres (3.9 to 4.7 in) in length. They open their eyes between 30 and 36 days, and leave the nest shortly afterwards. At seven weeks, the young are weaned and given regurgitated food. They have been reported to live for up to twenty two years on fur farms, and up to eighteen years in the wild.

Sables can interbreed with pine martens. This has been observed in the wild, where the two species overlap in the Ural Mountains, and is sometimes deliberately encouraged on fur farms. The resulting hybrid, referred to as a kidus, is slightly smaller than a pure sable, with coarser fur, but otherwise similar markings, and a long bushy tail. 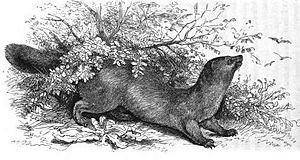 A Russian sable, as illustrated in The Trapper's Guide, 1867. Russian sables are the most valued geographical variation for their fur

In Russia, the sable's distribution is largely the result of mass re-introductions involving 19,000 animals between 1940 and 1965. Their range extends northward to the tree line, and extends south to 55–60° latitude in western Siberia, and 42° in the mountainous areas of eastern Asia. Their western distribution encompasses the Ural mountains, where they are sympatric with the European pine marten. They are also found on Sakhalin.

In Mongolia, sables occur in the Altai Mountains and in the surrounding forests of Lake Hovsgol, the latter being contiguous with the Trans-Baikal boreal forest region from which the most valuable sable pelts come. In China, sables occur in a limited area of the Xinjiang Uygur Autonomous Region. In northeastern China, sables are now limited to the Greater Khingan Range. In eastern Heilongjiang, the persistence of sables is suspected in the Lesser Khingan Range. Sables also occur in Hokkaido and on the Korean peninsula.

Because of the variable appearance of the sable in different geographic localities, there has been some debate over the exact number of subspecies that can be clearly identified. Mammal Species of the World recognises seventeen different subspecies, but other recent scholarly sources have identified anything from seven to thirty.

All content from Kiddle encyclopedia articles (including the article images and facts) can be freely used under Attribution-ShareAlike license, unless stated otherwise. Cite this article:
Sable Facts for Kids. Kiddle Encyclopedia.