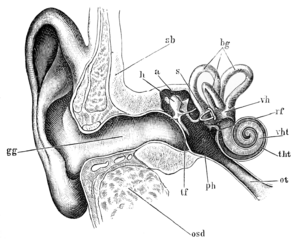 Schematic diagram of the human ear

Hearing is one of the five senses. Ears detect vibrations in the air. These vibrations are sounds. Most animal's can hear. Most land vertebrate's hear through ear's. Fish hear in several different ways. Many use their swim bladder to hear, and many use their lateral line.

In mammals, sound travels through three main parts of the ear to be heard. These are the outer, middle and inner ear.

Hearing threshold and the ability to localize sound sources are reduced underwater in humans but not in aquatic animals, including whales, seals, and fishes which have ears adapted to process water borne sound. Some research suggests underwater hearing in humans may occur through bone conduction but with poor localization. This is related to differences of the speed of sound in water vs air and the blocking of normal air conducted sound paths. 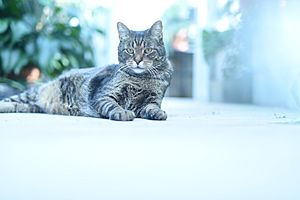 A cat can hear high-frequency sounds up to two octaves higher than a human.

Not all sounds are normally audible to all animals. Each species has a range of normal hearing for both amplitude and frequency. Many animals use sound to communicate with each other, and hearing in these species is particularly important for survival and reproduction. In species that use sound as a primary means of communication, hearing is typically most acute for the range of pitches produced in calls and speech.

Frequencies capable of being heard by humans are called audio or sonic. The range is typically considered to be between 20 Hz and 20,000 Hz. Frequencies higher than audio are referred to as ultrasonic, while frequencies below audio are referred to as infrasonic. Some bats use ultrasound for echolocation while in flight. Dogs are able to hear ultrasound, which is the principle of 'silent' dog whistles. Snakes sense infrasound through their jaws, and baleen whales, giraffes, dolphins and elephants use it for communication. Some fish have the ability to hear more sensitively due to a well-developed, bony connection between the ear and their swim bladder. The "aid to the deaf" of fishes appears in some species such as carp and herring.

Vertebrates aren't the only group of animals that have hearing. Some insects have hearing organs as well (e.g. the long-horned grasshopper, lubber grasshopper and the cicada); they use sound as a form of communication. 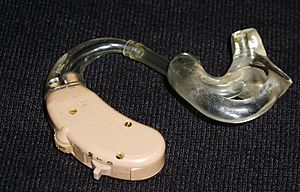 There are defined degrees of hearing loss:

Hearing aids are electronic devices that enable a person with hearing loss to receive sounds at certain amplitudes. This technological development has led to the benefit of improving the sense of hearing of a person, but the usage of these devices is significantly low.

All content from Kiddle encyclopedia articles (including the article images and facts) can be freely used under Attribution-ShareAlike license, unless stated otherwise. Cite this article:
Hearing Facts for Kids. Kiddle Encyclopedia.