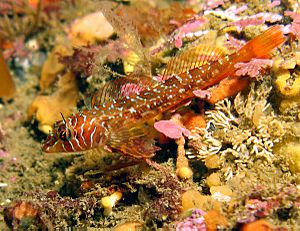 An aquatic animal is an animal, either vertebrate or invertebrate, which lives in the water for most or all of its lifetime. Many insects such as mosquitoes, mayflies, dragonflies and caddisflies have aquatic larvae, with winged adults. Aquatic animals may breathe air or extract oxygen that dissolved in water through specialised organs called gills, or directly through the skin. Natural environments and the animals that live in them can be categorized as aquatic (water) or terrestrial (land). This designation is paraphyletic.

Aquatic animals (especially freshwater animals) are often of special concern to conservationists because of the fragility of their environments. Aquatic animals are subject to pressure from overfishing, destructive fishing, marine pollution and climate change. 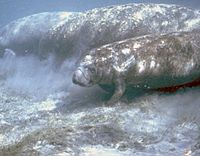 In addition to water breathing animals, e.g., fish, most mollusks etc., the term "aquatic animal" can be applied to air-breathing aquatic or sea mammals such as those in the orders Cetacea (whales) and Sirenia (sea cows), which cannot survive on land, as well as the pinnipeds (true seals, eared seals, and the walrus). The term "aquatic mammal" is also applied to four-footed mammals like the river otter (Lontra canadensis) and beavers (family Castoridae), although these are technically amphibious or semiaquatic. 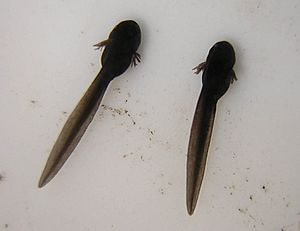 Amphibians, like frogs (the order Anura), while requiring water, are separated into their own environmental classification. The majority of amphibians (class Amphibia) have an aquatic larval stage, like a tadpole, but then live as terrestrial adults, and may return to the water to mate.

Most mollusks have gills, while some fresh water ones have a lung instead (e.g. Planorbidae) and some amphibious ones have both (e.g. Ampullariidae).

All content from Kiddle encyclopedia articles (including the article images and facts) can be freely used under Attribution-ShareAlike license, unless stated otherwise. Cite this article:
Aquatic animal Facts for Kids. Kiddle Encyclopedia.