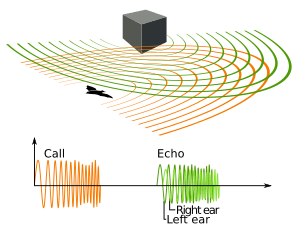 A depiction of the ultrasound signals emitted by a bat, and the echo from a nearby object.

Echolocation, also called bio sonar, is the biological sonar used by several kinds of animals. Echolocating animals emit calls out to the environment and listen to the echoes of those calls that return from various objects near them. They use these echoes to locate and identify the objects. Echolocation is used for navigation and for foraging (or hunting) in various environments.

Echolocating animals include some mammals and a few birds; most notably microchiropteran bats and odontocetes (toothed whales and dolphins), but also in simpler form in other groups such as shrews, one genus of megachiropteran bats (Rousettus) and two cave dwelling bird groups, the so-called cave swiftlets in the genus Aerodramus (formerly Collocalia) and the unrelated Oilbird Steatornis caripensis.

Echolocation is the same as active sonar, using sounds made by the animal itself. Ranging is done by measuring the time delay between the animal's own sound emission and any echoes that return from the environment. The relative intensity of sound received at each ear as well as the time delay between arrival at the two ears provide information about the horizontal angle (azimuth) from which the reflected sound waves arrive.

Unlike some human-made sonars that rely on many extremely narrow beams and many receivers to localize a target (multibeam sonar), animal echolocation has only one transmitter and two receivers (the ears) positioned slightly apart. The echoes returning to the ears arrive at different times and at different loudness levels, depending on the position of the object generating the echoes. The time and loudness differences are used by the animals to perceive distance and direction. With echolocation, the bat or other animal can see not only where it is going but also how big another animal is, what kind of animal it is, and other features..

At the most basic level, echolocation is based on the neural anatomy of auditory brain circuitry. In essence, ascending brain pathways in the brain stem allow the brain to calculate the difference between the two ears to very small fractions of a second.

All content from Kiddle encyclopedia articles (including the article images and facts) can be freely used under Attribution-ShareAlike license, unless stated otherwise. Cite this article:
Animal echolocation Facts for Kids. Kiddle Encyclopedia.