Larches are conifers in the genus Larix. They grow on the northern hemisphere. Unlike other conifers, larches lose their leaves during autumn and winter. 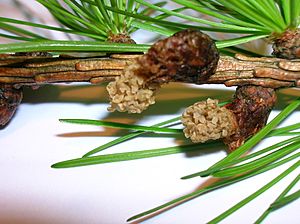 There are 10–14 species, for example the European Larch, the North American Larch and the Japanese Larch. Scientists usually divide them into two main groups, New World species (North America) and Old World species (Europe and Asia). Inside this one, there are two more groups, Northern (Central Europe, Siberia, Japan, north of China) and Southern (south of China, Himalaya, Myanmar).

There is also a hybrid, the Dunkeld Larch, which is a mix of the European Larch and the Japanese Larch.

Larch wood is very valuable because it is resistant and it grows quickly. It is used for boats as well as houses. Larches are also used in herbal medicine and in bonsai. The tree appeared in many Monty Python sketches as a joke.

All content from Kiddle encyclopedia articles (including the article images and facts) can be freely used under Attribution-ShareAlike license, unless stated otherwise. Cite this article:
Larch Facts for Kids. Kiddle Encyclopedia.