Larix lyallii, the subalpine larch, or simply alpine larch, is a deciduous, coniferous tree native to northwestern North America. It lives at high altitudes—1,800 to 2,400 m (5,900 to 7,900 ft)—in the Rocky Mountains of Idaho, Montana, British Columbia, and Alberta. There is a disjunct population in the Cascade Range of Washington.

Subalpine larch is hardy and can survive at low temperatures and on thin rocky soils; the tree is often found near treeline. However, it can grow in a variety of soils and with or without shade, as long as the soil is moist but well-drained. 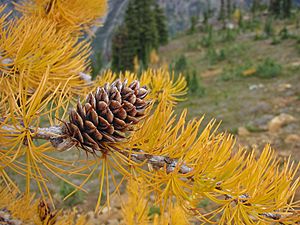 Larix lyallii is a small tree, growing from 10 to 25 m (33 to 82 ft) tall and shorter at higher elevations. It has a straight trunk with a sparse and somewhat conical crown. The branches are horizontal, perpendicular to the trunk, irregularly spaced and twisted. The twigs are finely hairy. The needles are four-angled, 20 to 35 mm (0.79 to 1.38 in) long and crowded in groups of 30 to 40 on short spurs. They are pale blue-green and deciduous, turning golden yellow in autumn.

The seed cones, 2.5 to 4 cm (0.98 to 1.57 in) long, are red-purple when young but become dark brown with age. They have thin scales and narrow bracts that extend over the scales. The bark is thin and turns from yellow-gray to dark red-brown with age. It also becomes deeply furrowed into small, scaly plates.

The tree is also one of the longest lived tree species. There is record of a specimen in Kananaskis, Alberta which has been estimated (extrapolated) to be ~2000 years old, the oldest tree in Canada.

The bark contains tannin and the wood is strong, heavy, and durable.

All content from Kiddle encyclopedia articles (including the article images and facts) can be freely used under Attribution-ShareAlike license, unless stated otherwise. Cite this article:
Subalpine larch Facts for Kids. Kiddle Encyclopedia.