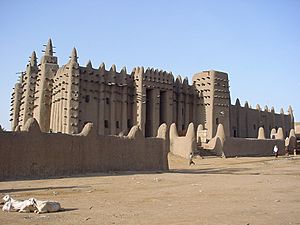 Djenné used to be an important town on the trans-Saharan trade; its mosque is a World Heritage Site

Trans-Saharan trade was when people traveled across the Sahara to reach sub-Saharan Africa from the North African coast, Europe, or the Levant. The trade existed during the prehistoric times. The trade became popular from the 8th century until the late 16th century. The trade was also used to transport slaves and food to different places.

All content from Kiddle encyclopedia articles (including the article images and facts) can be freely used under Attribution-ShareAlike license, unless stated otherwise. Cite this article:
Trans-Saharan trade Facts for Kids. Kiddle Encyclopedia.