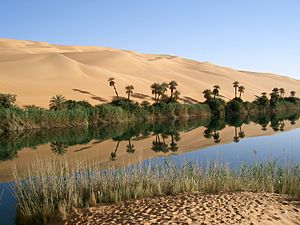 Oasis in the Libyan part of the Sahara

In geography, an oasis (/oʊˈeɪsɪs/; plural: oases /oʊˈeɪsiːz/) is an isolated area in a desert, typically surrounding a spring or similar water source, such as a pond or small lake. Oases also provide habitat for animals and even humans if the area is big enough.

The word oasis came into English via Latin: oasis from Ancient Greek: ὄασις óasis, which in turn is a direct borrowing from Demotic Egyptian. The word for oasis in the later attested Coptic language (the descendant of Demotic Egyptian) is wahe or ouahe which means a "dwelling place".

Oases are made fertile when sources of freshwater, such as underground rivers or aquifers, irrigate the surface naturally or via man-made wells. Oases can vary in size from about 2.5 acres (1.0 ha) to much larger areas that can support many farms.

Rain showers provide subterranean water to sustain natural oases, such as the Tuat. Substrata of impermeable rock and stone can trap water and retain it in pockets, or on long faulting subsurface ridges or volcanic dikes water can collect and percolate to the surface. Any incidence of water is then used by migrating birds, which also pass seeds with their droppings which will grow at the water's edge forming an oasis. It can also be used to plant crops.

The location of oases has been of critical importance for trade and transportation routes in desert areas; caravans must travel via oases so that supplies of water and food can be replenished. Thus, political or military control of an oasis has in many cases meant control of trade on a particular route. For example, the oases of Awjila, Ghadames, and Kufra, situated in modern-day Libya, have at various times been vital to both North-South and East-West trade in the Sahara Desert.

People who live in an oasis must manage land and water use carefully; fields must be irrigated to grow plants like apricots, dates, figs, and olives. The most important plant in an oasis is the date palm, which forms the upper layer. These palm trees provide shade for smaller trees like peach trees, which form the middle layer. By growing plants in different layers, the farmers make best use of the soil and water. Many vegetables are also grown and some cereals, such as barley, millet, and wheat, are grown where there is more moisture.

All content from Kiddle encyclopedia articles (including the article images and facts) can be freely used under Attribution-ShareAlike license, unless stated otherwise. Cite this article:
Oasis Facts for Kids. Kiddle Encyclopedia.