Kids Encyclopedia Facts
This page is about the National Conservation Area in Nevada. For other uses, see Red Rock Canyon (disambiguation).

The conservation area showcases a set of large red rock formations: a set of sandstone peaks and walls called the Keystone Thrust. The walls are up to 3,000 feet (910 m) high, making them a popular hiking and rock climbing destination. The highest point is La Madre Mountain, at 8,154 feet (2,485 m).

A one-way loop road, 13 miles (21 km) long, provides vehicle access to many of the features in the area. Several side roads and parking areas allow access to many of the area trails. A visitor center is located at the start of the loop road. The loop road is also very popular for bicycle touring; it begins with a moderate climb, then is mostly downhill or flat.

Red Rock Canyon is a side-canyon accessible only by a four-wheel-drive road from the scenic loop. State Route 159 cuts through an unnamed but often-visited valley; it is commonly, but mistakenly, referred to as Red Rock Canyon. The Wilson Cliffs, or Keystone Thrust, a massive wall of rock, can be seen to the west from SR 159.

Towards the southern end of the National Conservation Area are Spring Mountain Ranch State Park; Bonnie Springs, a replica of a western ghost town; and the village of Blue Diamond. 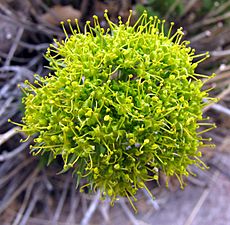 The first humans were attracted to the Red Rock area due to its resources of water, plant, and animal life that could not be easily found in the surrounding desert. Hunters and gatherers such as the historical Southern Paiute and the much older Archaic, or Desert Culture Native Americans, have successively occupied this area.

As many as six different Native American cultures may have been present at Red Rock over the millennia. The following chronology is an approximation, from the present to ancient pre-history:

Numerous petroglyphs, as well as pottery fragments, remain today throughout the area. In addition, several roasting pits used by the early Native Americans at Red Rock provide further evidence of human activity in the past.

In the early 1900s, around the time the first European Americans settled in nearby Las Vegas, a small sandstone quarry was operated by the Excelsior Company near the northern area of the scenic loop. It proved to be uneconomical and was shut down. Evidence of the quarry's existence includes some of the huge sandstone blocks that have been left behind.

The Red Rocks have been used as a film location for such movies as Roy Rogers and his horse Trigger in Bells of San Angelo (1947) and was a location for The Stalking Moon with Gregory Peck in 1968.

The Howard Hughes Corporation, developer of Summerlin, has transferred land adjacent to the protected area, to provide a buffer between development and the conservation area. On the west side, Red Rock Canyon National Conservation Area is adjacent to the Spring Mountains National Recreation Area.

The conservation area is one of the easternmost parts of the Mojave Desert; the lowest elevation of the area, from 3,600 to 4,500 feet (1,100 to 1,400 m), is in the Lower Sonoran Zone, while the area from 4,500 feet (1,400 m) up is in the Upper Sonoran Zone. The character of the sandstone layers is such that a number of year-round springs may be found in the recesses of the side canyons.

Some 600 species of plants are known in the area. Common types in the valley floor include the Joshua tree, Mojave yucca, banana yucca, creosote, and blackbrush. Higher up the Utah juniper and Sonoran scrub oak (also called scrub live oak) come to dominate. Agave is easy to spot in red rock niches, with its thick low leaves and flowering stem that reaches twice the height of a man. The Calico Tanks trail has a plaque about prehistoric agave roasting pits. Ponderosa pines may be found at the top of the valley, where it connects to the Spring Mountains.

Wild burros are a familiar sight, as are rabbits and ground squirrels. Desert bighorn sheep are occasionally seen at higher elevations. During rare spring and summer rainstorms, tiny red-spotted toads can be seen emerging from pools of water.

The Conservation Area is protected habitat for the desert tortoise. A habitat at the Visitor Center houses eight females and two males. One of the males, Mojave Max, is a mascot tortoise for the Clark County Desert Conservation Program; he is used in educational programs. 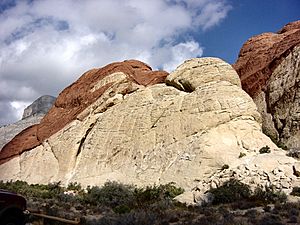 An outcrop of Aztec Sandstone

The Red Rock area has a complex geological history, which over millions of years, helped to create the dramatic landscape that characterizes the region.

The Red Rock area was located under an ocean basin during the Paleozoic Era 600 million years ago. Up to 9,000 feet of limey sediments were deposited and eventually lithified to limestone. During the Mesozoic Era 250 million years ago, the earth's crust started to rise due to tectonic shifts, and marine shales and sandstones were deposited. As the basin became isolated evaporite formations of salt and gypsum were deposited. Oxidation of the iron minerals in the sediments resulted in the red colors of some of the rocks. Deposition by streams and in swamp environments resulted in the formation of petrified wood in the area.

By 180 million years ago, the climate continued to change and the area became a desert featuring vast expanses of huge shifting sand dunes. These dunes accumulated over a broad area, up to a half mile thick, and were lithified, cemented with calcium carbonate and iron oxides. They developed as the colorful Aztec Sandstone.

During a mountain-building period called the Laramide orogeny around 66 million years ago, the Keystone Thrust Fault developed. The Keystone is part of a series of thrust faults which ran through much of western North America and through the Red Rock Conservation Area. The movement of this fault forced the older gray sedimentary rock over the younger red rocks, forming the varicolored landscape that can be seen in the mountain today. The thrust is exposed over a distance of 13 miles along the Red Rock escarpment. 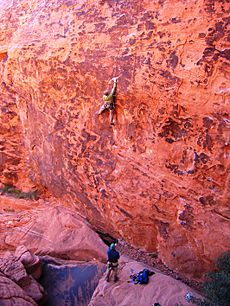 Climbers at the second pullout of the scenic loop

Red Rock provides a wide variety of activities, the most popular being hiking, biking, rock scrambling, and rock climbing. Horseback riding and camping are also allowed on specific trails and in designated areas. Automobile and motorcycle clubs often conduct group drives through the 13-mile scenic drive. ATV use is not permitted in the area.

Aside from the obvious dangers from climbing rock faces and cliffs, visitors are informed that temperatures can routinely exceed 105 °F (41 °C) in the summer, so they must bring plenty of water. Visitors hiking into the backcountry off established trails are advised against traveling alone, and should inform other people of their plans. Risks include the presence of venomous rattlesnakes and flash flooding/lightning from thunderstorms.

Although the Yosemite-size walls offer a host of challenging lines, technical climbing activity was bit recorded before 1968. The first modern routes, climbed in the early 1970s, are described in several books. The rock is Aztec Sandstone, a relatively solid variety with a hard surface varnish. Many climbs involve ascents of single crack systems hundreds of feet long.

The climbs of Red Rock cover a broad range of length and difficulty. The long, easy routes had made the area a common climbing training ground, but the canyon also offers many difficult climbs as well. In recent decades, this broad appeal and the classic nature of many routes has made the area an international destination for rock climbers.

Popular sport climbing areas include the Calico Hills and Sandstone Quarry. Red Rock has a multitude of traditional climbing areas, including single-pitch areas such as Brass Wall and Necromancer Wall, along with multi-pitch areas such as Eagle Wall, Aeolian Wall, Mescalito, and Solar Slab. Long free and big-wall aid routes are found on features such as the Rainbow Wall, first climbed over three days in 1973 by Joe Herbst and Larry Hamilton.

Red Rock has hiking trails (map) and picnic areas. Trails are changed and diverted depending upon the needs of the ecosystem. In early spring, depending upon the precipitation, waterfalls may be seen on the edge of the canyons. Popular trails within the vicinity of the scenic drive loop include:

Wildfires occur in Red Rock. From the loop area, visitors may see both the damage caused by these events as well as the ability of the desert to heal itself over time.

Recent fires seemed to have been in part fueled by the thick growth of invasive, non-native red brome and cheat grasses. They also compete with the native plants in the area for resources. So far the Bureau of Land Management has not developed plans to control these weeds, as control methods such as using herbicides can be both costly anddamaging to the native plants.

Several significant wildfires have burned within the Red Rock Canyon NCA in recent years, including: 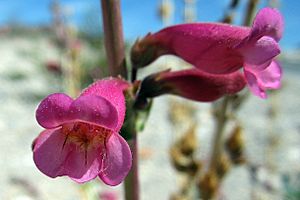 All content from Kiddle encyclopedia articles (including the article images and facts) can be freely used under Attribution-ShareAlike license, unless stated otherwise. Cite this article:
Red Rock Canyon National Conservation Area Facts for Kids. Kiddle Encyclopedia.