Clark County is a county located in the U.S. state of Nevada. As of the 2010 census, the population was 1,951,269, with an estimated population of 2,114,801 in 2015. It is by far the most populous county in Nevada, accounting more than two-thirds of its residents. Las Vegas, Nevada's most populous city, has been the county seat since the county was established.

The county was formed by the Nevada Legislature by splitting off a portion of Lincoln County on February 5, 1909, and came into existence on July 1, 1909. The Las Vegas Valley, a 600 sq mi (1,600 km2) basin, includes Las Vegas as well as the other primary population center, the unincorporated community of Paradise.

Much of the county was originally part of Pah-Ute County, Arizona Territory before Nevada became a state. The county was named for William Andrews Clark, a Montana copper magnate and U.S. Senator. Clark was largely responsible for the construction of the Los Angeles and Salt Lake Railroad through the area, a factor heavily contributing to the region's early development.

Clark County is today known as a major tourist destination, with 150,000 hotel rooms. The Las Vegas Strip, home to most of the hotel-casinos known to many around the world, is located not within the City of Las Vegas city limits, but in unincorporated Paradise. It is, however, located in the Las Vegas Valley.

Clark County is coextensive with the Las Vegas–Paradise, NV Metropolitan Statistical Area, a metropolitan statistical area designated by the Office of Management and Budget and used by the United States Census Bureau and other agencies for statistical purposes. 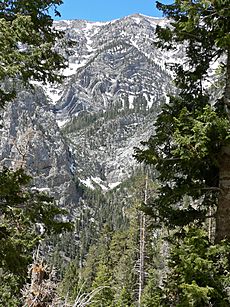 The Colorado River forms the county's southeastern boundary, with Hoover Dam forming Lake Mead along much of its length. The lowest point in the state of Nevada is located on the Colorado River just south of Laughlin in Clark County, where it flows out of Nevada into California and Arizona. Las Vegas is a valley. By definition, Greater Las Vegas is a tectonic valley, surrounded by four mountain ranges, with nearby Mount Charleston being the highest elevation at 11,918 ft (3,633 m), located to the northwest. Other than the forests on Mount Charleston, the geography in Clark County is a desert. Creosote bushes are the main native vegetation, and the mountains are mostly rocky with little vegetation. 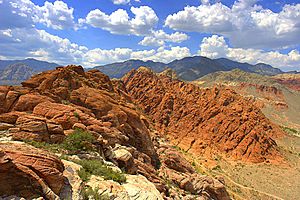 There are 20 official wilderness areas in Clark County that are part of the National Wilderness Preservation System. Many of these are located in, or partially located in, one of the preceding protected areas, as indicated below. Many are separate entities that are managed by the Bureau of Land Management (BLM):

The United States Census Bureau 2009 estimates place the population for the Las Vegas Metropolitan Statistical Area at 1,902,834 people, and the region is one of the fastest growing in the United States. Large numbers of new residents in the state originate from California. 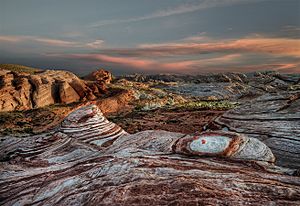 Clark County contains a diverse desert flora and fauna, including higher elevation mountain areas, the desert floor and the Colorado River/Lake Mead ecosystems. Variations in diurnal temperature as well as seasonal swings in temperature create demanding adaptation elements on the species of this county. Additional pressure has been placed on species survival by the rapid human population expansion, especially since 1970.

Correspondingly air quality levels prior to the 1960s were in a favorable range, but the proliferation of automobiles with the human population expansion created circumstances where some Federal Air Quality Standards began to be violated in the 1980s.

To plan for the wave of development forecast by 1980, Clark County embarked on a regional Environmental Impact Assessment funded by a Federal Section 208 program, with Sedway Cooke conducting the planning work and Earth Metrics performing environmental analysis. This endeavor projected future population growth, land use changes and environmental impacts.

To prevent the loss of federal funds due to unacceptable dust levels in the Las Vegas valley, in 2003 the Nevada Air Quality Management division (under direction of Clark County officials) created the massive "Don't Be a Dusthole" campaign. The campaign successfully raised awareness of dust pollution in the Las Vegas valley, quantifiably reducing pollutants and preserving ongoing federal funding.

Located in Apex is the Apex Landfill which at 2,200 acres (890 ha) is the largest landfill in the United States. Republic Services owns and operates the landfill.

Nevada is the third most seismically active state in the U.S. (after Alaska and California); it has been estimated by the United States Geological Survey (USGS) that over the next 50 years Clark County has a 10–20% chance of a M6.0 or greater earthquake occurring within 50 km of Las Vegas. 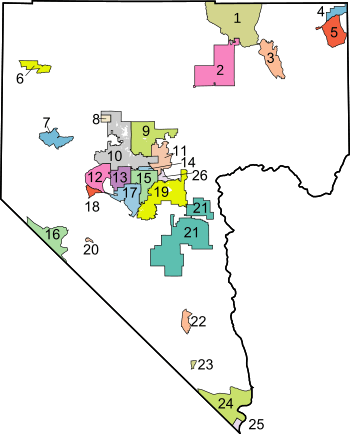 All content from Kiddle encyclopedia articles (including the article images and facts) can be freely used under Attribution-ShareAlike license, unless stated otherwise. Cite this article:
Clark County, Nevada Facts for Kids. Kiddle Encyclopedia.