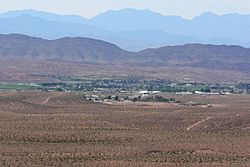 Logandale is an unincorporated town located in Clark County, Nevada. The community is the home of the annual Clark County Fair and Rodeo.

Established on the west side of the Muddy River in 1865, Logandale was originally named West Point. It was enlarged and renamed Saint Joseph in 1868, by settlers driven out of their first town of Saint Joseph, Nevada on the east side of the Muddy River when it burned down. It also acquired the post office established in the old town on August 26, 1867.

The new Saint Joseph like the other Mormon settlements in the Moapa Valley was abandoned in 1871 due to a tax dispute with the state of Nevada. Its post office closed in October 1871 but became active again on in May 1876. Following the Mormon return to Overton in 1880, in November 1883 the post office operations were moved there.

The town was later to begin to revive in 1912 around a railroad station with the name Logan, for a Civil War veteran who settled on the abandoned town site. It was subsequently renamed Logandale to avoid confusion with Logan, Utah.

Logandale is located at the north end of Moapa Valley. The town can be accessed by taking exit 93 off of Interstate Highway 15, going south on Highway 169.

The Clark County Fair and Rodeo is held annually in Logandale.

All content from Kiddle encyclopedia articles (including the article images and facts) can be freely used under Attribution-ShareAlike license, unless stated otherwise. Cite this article:
Logandale, Nevada Facts for Kids. Kiddle Encyclopedia.