Moapa Valley is an unincorporated town and census-designated place in Clark County, Nevada, United States. As of the 2010 census, it had a population of 6,924. The valley in which the community lies, also named Moapa Valley, is about 40 miles (64 km) long and lies roughly northwest to southeast.

The Muddy River, formerly called the Moapa River, originates from the Warm Springs Natural Area and flows through the valley before emptying into Lake Mead. The communities of Moapa Town, Logandale and Overton are located in the valley. Logandale is about 12 miles (19 km) southeast of Moapa Town, and Overton is about 5 miles (8.0 km) southeast of Logandale. Prior to the creation of Lake Mead, Moapa Valley also included the town of St. Thomas, which was abandoned in 1938 due to the rising lake level. 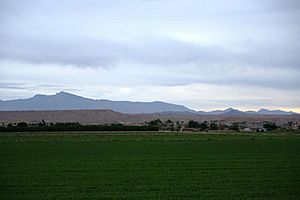 From Moapa Valley, looking east towards the Mormon Mesa

There were 1,934 households out of which 38.8% had children under the age of 18 living with them, 69.8% were married couples living together, 6.5% had a female householder with no husband present, and 21.1% were non-families. 17.8% of all households were made up of individuals and 10.4% had someone living alone who was 65 years of age or older. The average household size was 2.99 and the average family size was 3.43.

The Moapa Valley was originally settled by the Anasazi people around 350 B.C. Around 500 A.D., farming supplanted hunting as the major food source for the people known as "Basketmakers". It was also around this time that the art of pottery was introduced. By 600 A.D. the people, now known as "Puebloans", began building their dwellings above ground, using wood and brush plastered with adobe. Farming was a well-established practice with corn, beans, squash, and cotton being the primary crops. The Puebloans also hunted mule deer, desert bighorn sheep, rabbits, and rodents using bows and arrows.

Around 1000 A.D. Southern Paiutes moved into the Moapa Valley area. The Paiutes were hunter-gatherers who did not utilize agriculture as a primary source of subsistence. They lived in temporary brush dwellings, spoke the Southern Paiute language, and practiced a style of pottery that was less sophisticated than the methods used by the Anasazi. The Paiutes and Anasazi people coexisted with little effort in the valley.

Sometime around 1150 A.D., the Anasazi abandoned Moapa Valley, possibly due to a drought which gripped the Desert Southwest during that time. When the first European settlers arrived, the Paiutes were relocated to a reservation north of Moapa Town, where they continue to live today.

The first Euroamerican settlers in the Moapa Valley were Mormon pioneers in the latter 1860s. The area has remained heavily populated by Mormons to the present time. Many streets bear the names of prominent Mormon families, including Barlow, Hinckley, Leavitt, Lyman, Perkins [1], Whitmore, Wells, and Andersen. The LDS Logandale Stake has thirteen wards. The Huntsmans, a well known pioneer family of Moapa Valley, established the Huntsman Ranch, which the cabin still remains today near Kane Springs. It is a State of Nevada designated historical site.

All content from Kiddle encyclopedia articles (including the article images and facts) can be freely used under Attribution-ShareAlike license, unless stated otherwise. Cite this article:
Moapa Valley, Nevada Facts for Kids. Kiddle Encyclopedia.