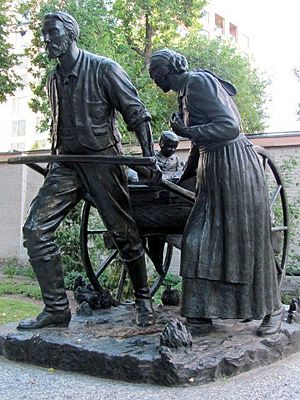 The Mormon pioneers were members of The Church of Jesus Christ of Latter-day Saints (LDS Church), also known as Latter-day Saints, who migrated in the mid-1840s across the United States from the Midwest to the Salt Lake Valley in what is today the U.S. state of Utah. At the time of the planning of the exodus in 1846, the territory was owned by the Republic of Mexico, which soon after went to war with the United States over the annexation of Texas. The Salt Lake Valley became American territory as a result of this war.

The journey was taken by about 70,000 people beginning with advance parties sent out by church leaders in March 1846 after the 1844 death of the church's leader Joseph Smith made it clear that the group could not remain in Nauvoo, Illinois—which the church had recently purchased, improved, renamed, and developed because of the Missouri Mormon War, setting off the Illinois Mormon War. The well-organized wagon train migration began in earnest in April 1847, and the period (including the flight from Missouri in 1838 to Nauvoo), known as the Mormon Exodus is, by convention among social scientists, traditionally assumed to have ended with the completion of the First Transcontinental Railroad in 1869. Not everyone could afford to transport a family by railroad, and the transcontinental railroad network only serviced limited main routes, so wagon train migrations to the far west continued sporadically until the 20th century.

All content from Kiddle encyclopedia articles (including the article images and facts) can be freely used under Attribution-ShareAlike license, unless stated otherwise. Cite this article:
Mormon pioneers Facts for Kids. Kiddle Encyclopedia.