Henderson, officially the City of Henderson, is a city in Clark County, Nevada, United States, about 16 miles southeast of Las Vegas. It is the second-largest city in Nevada, after Las Vegas, with an estimated population of 285,667 in 2015. The city is part of the Las Vegas metropolitan area, which spans the entire Las Vegas Valley. Henderson occupies the southeastern end of the valley, at an elevation of approximately 1,330 feet (410 m).

In 2011, Forbes magazine ranked Henderson as America's second-safest city. It has also been named as "One of the Best Cities to Live in America" by Bloomberg Businessweek. In 2014, Henderson was again ranked as one of the Top 10 "Safest Cities in the United States" by the FBI Uniform Crime Report. 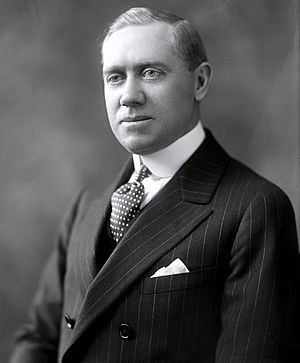 Henderson was named in honor of Senator Charles B. Henderson.

The township of Henderson first emerged in the 1940s during World War II with the building of the Basic Magnesium Plant. Henderson quickly became a main supplier of magnesium in the United States, which was called the "miracle metal" of World War II. The plant supplied the US War Department with magnesium for incendiary munition casings and airplane engines, frames, and other parts. A quarter of all US wartime magnesium came from the Henderson Plant to strengthen aluminum, using 25% of Hoover Dam's power to separate the metal from its ore by electrolysis. Mayor Jim Gibson's grandfather, Fred D. Gibson, was one of the original engineers sent to Great Britain to learn the secret of creating the "miracle metal" which would eventually help the United States and its allies win the war. The British liaison officer sent to Henderson, Major Charles Ball, had a street named after him. There was some concern that "Ball St," would sound improper, so the street was named "Major Avenue".

Although "born in America's defense", Henderson's future after World War II was uncertain. In 1947, magnesium production was no longer necessary for defense, and the majority of the 14,000 BMI employees moved away. Enrollment in the school system was reduced by two thirds, and well over half the townsite houses, built to house plant workers, became vacant. In 1947, the United States War Asset Administration had offered Henderson for sale as war surplus property.

In an effort to save the city, the Nevada Legislature spent a weekend visiting Henderson, evaluating the possibility of state administration of Basic Magnesium. Within days of the visit, the legislators unanimously approved a bill giving the Colorado River Commission of Nevada the authority to purchase the industrial plants. Governor Vail Pittman signed the bill on March 27, 1947, helping save Henderson from becoming war surplus property.

In 1988, the Pacific Engineering and Production Company of Nevada (PEPCON) rocket fuel factory, in the modern-day Gibson Springs neighborhood of Henderson, caught fire. The blaze quickly spread and engulfed the factory, spewing rocket fuel, smoke, and toxic fumes from the building, eventually obliterating it in a massive explosion, followed by six smaller explosions. These sent shockwaves throughout Henderson and parts of the Las Vegas Valley, shattering glass and damaging buildings. The explosions also caused earthquakes, some of which measured over 3.0 on the Richter magnitude scale. Two people were killed, and an additional 372 injured.

The events of the PEPCON factory disaster spurred development in Henderson years later, from its historical industrial development to residential and commercial development. There are now no signs of the explosion where it happened. Today, the site consists mostly of office buildings.

The mountains that surround Henderson mostly have gentle slopes. The McCullough Range is closest to the city; most of this range is covered by black rocks from a volcanic explosion millions of years ago. These mountains reach an average height of about 3,800 feet (1,200 m). The landscape consists of desert with barely any water. The only water that is in the city is from washes like Duck Creek.

Henderson is classified as having a hot desert climate (BWh) in the Köppen climate classification. It has mild winters and hot summers. Snow can occasionally fall in the winter. The monsoon can bring torrential storms in the summer, which can cause flash flooding, thunderstorms, and loss of electric power. The hottest month is July and the coldest month is November.

There were 66,331 households out of which 33.0% had children under the age of 18 living with them, 56.4% were married couples living together, 10.0% had a female householder with no husband present, and 29.0% were non-families. 20.3% of all households were made up of individuals and 5.0% had someone living alone who was 65 years of age or older. The average household size was 2.63 and the average family size was 3.05.

An increasing number of major shopping malls, movie theater complexes, restaurants and casino resorts offer residents a variety of choices for leisure time in Henderson. The city also sits a few miles southeast of Las Vegas and is not too far from the world-famous Las Vegas Strip. "Shakespeare in the Park" celebrated its tenth anniversary in 1996, a testament to Henderson's long-standing support for the arts and cultural programs. The city also boasts the largest recreational facility – the Multigenerational Facility at Liberty Pointe – in Nevada as well as Nevada's only scenic Bird Preserve. The city supports a variety of other cultural events as well, many of which are held at the outdoor amphitheater, the largest one of its kind in Nevada. 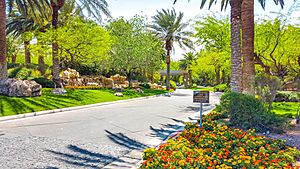 The entrance to MacDonald Highlands in Henderson.

The city is served by RTC Transit (formerly Citizens Area Transit/CAT) with its network of bus routes which run throughout the Las Vegas Valley.

Henderson is home for the Henderson Executive Airport. The main airport for the metropolitan area is McCarran International Airport, located northwest of Henderson.

The Union Pacific Railroad serves Henderson over a branch line originally built to support construction of Hoover Dam. The final few miles of the line, owned by the U.S. Government, were abandoned after the dam was completed. The line still extends to Boulder City; in 1985, the state purchased the section east of appropriately I-515, with the Nevada Southern Railroad Museum operating excursion trains over the easternmost seven miles (11 km).

In 1988, the PEPCON rocket fuel factory became engulfed in fire. Smoke was seen from 100 miles away, and two major blasts measured 3.0 and 3.5, respectively, on the Richter magnitude scale at observatories in California and Colorado. Investigators surveying the damage in the surrounding communities estimated the blast as similar to a 1-kiloton airblast nuclear detonation. Two people were killed. The explosion spurred the development of Henderson from industrial to the largely residential area it is today. There are no signs of the Pepcon explosion today, and the site now consists mostly of office buildings.

All content from Kiddle encyclopedia articles (including the article images and facts) can be freely used under Attribution-ShareAlike license, unless stated otherwise. Cite this article:
Henderson, Nevada Facts for Kids. Kiddle Encyclopedia.