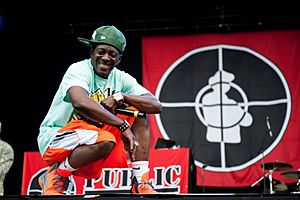 William Jonathan Drayton Jr. (born March 16, 1959), known by the stage name Flavor Flav, is an American rapper and television personality. He is a member of the hip hop group Public Enemy. He raps about politics. After several years of quiet, he has been seen again lately as a star of American reality television. He has starred in some VH1 programs, most recently the Flavor of Love series.

Flav was born in Roosevelt, New York and grew up in Freeport, New York.

All content from Kiddle encyclopedia articles (including the article images and facts) can be freely used under Attribution-ShareAlike license, unless stated otherwise. Cite this article:
Flavor Flav Facts for Kids. Kiddle Encyclopedia.