The New Orleans Jazz & Heritage Festival, often known as Jazz Fest, is an annual celebration of the music and culture of New Orleans and Louisiana. The term "Jazz Fest" also refers to the days surrounding the festival and the many shows at unaffiliated New Orleans nightclubs scheduled during the festival weekends.

The festival is a major tourist destination with economic importance for New Orleans rivaled only by Mardi Gras; the event brings to the city $300 million annually. Early Jazz Fests featured almost exclusively local acts. As the event's popularity grew, the festival expanded to include nationally known acts.

According to the official website, "the Festival celebrates the indigenous music and culture of New Orleans and Louisiana, so the music encompasses every style associated with the city and the state: blues, R&B, gospel, Cajun, zydeco, Afro-Caribbean, folk, Latin, rock, rap, country, bluegrass, and everything in between. And of course there is lots of jazz, both contemporary and traditional." 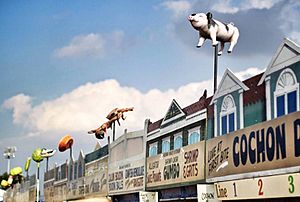 There are craft booths throughout the grounds. The Congo Square African Marketplace contains pieces from local, national, and international artisans and has the atmosphere of a true marketplace. Many of the artisans utilize ancient crafting techniques. In the Contemporary Crafts area, one can find handmade clothing, leather goods, jewelry, paintings, sculptures, and musical instruments. Visitors can also watch demonstrations of metal, painting, pottery, and fiber works. Lastly, the Louisiana Marketplace contains baskets, hand-colored photographs, jewelry, and landscape-themed art.

One unique aspect of the Festival is the allocation of large areas for dedication to cultural and historical practices unique to Louisiana. These dedications depict many cultures that exist in the state, including both the Cajun culture and the culture of the descendants of native Canary Islanders, the Los Isleños, as well as many others. Some of the areas include the Louisiana Folklife Village, which focuses on state art and culture, the Native American Village, and the Grandstand. Many of the folk demonstrators have been recognized by the National Endowment of the Arts for their work.

In addition, parades are held throughout the duration of the event. They include parades by the Mardi Gras Indians, marching bands, brass bands, and social aid and pleasure clubs. 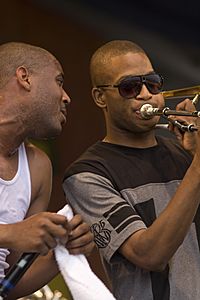 The Festival has been held annually since 1970 when it was founded by the New Orleans Hotel Motel Association to form "the New Orleans Jazz & Heritage Foundation" that owns the Festival, except 2020 when it was cancelled on what would've been the 50th anniversary. George Wein's Festival Productions was contracted to produce the Festival. Wein produced the Newport Jazz Festival (1954) and the Newport Folk Festival (1959) in Newport, Rhode Island.

To produce the Festival in New Orleans, Wein assembled advisers, among them Ellis Marsalis, Richard B. "Dick" Allen and Harry Souchon. Allen, the curator of Tulane University's Hogan Jazz Archives, recommended Archive employee Allison Miner and intern Quint Davis to Wein to help produce the first festival. Both Miner and Davis knew a great deal about jazz. They went to black clubs to hire performers rather than to Bourbon Street or other tourist destinations because it was at these clubs that live music was being produced. The first person the pair booked was Snooks Eaglin, a street singer who performed at the festival every year. After Wein established the Festival, Miner and Davis oversaw operations of Festival Productions Inc.-New Orleans for many years under the supervision of Wein and the Foundation Board. Quint Davis holds the position of CEO of Festival Productions, Inc.- New Orleans, while Miner is largely credited with founding the New Orleans Jazz & Heritage Foundation Archive. AEG Live became a co-producer of the festival in 2004.

When Miner died on December 23, 1995, the interviewing stage was renamed in her memory as the Allison Miner Music Heritage Stage. After Hurricane Katrina, the stage was temporarily merged with the Lagniappe Stage, which is housed in the Grandstand. However, in 2009, it was reinstated as a full stage.

Before the New Orleans Jazz & Heritage Festival, similar New Orleands jazz festivals were held in the 1960s. The first two were in 1970 and 1971 at Louis Armstrong Park, previously called Beauregard Square, in Congo Square and the adjoining New Orleans Municipal Auditorium. The 145-acre New Orleans Fair Grounds and Racetrack began to hold Jazz Fest in 1972. The venue is located at 1751 Gentilly Boulevard, approximately ten minutes from the French Quarter. The New Orleans Fair Grounds and Racetrack is a much larger venue than Congo Square and was chosen to hold the Festival when organizers realized how popular the event was. 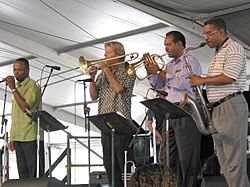 The first Jazz Fest, in Congo Square, cost $3 for admission and was minimally advertised, and had only a Gospel Tent and four open stages, many of which had no microphones. Musicians were housed in Davis' and Miner's homes; there was no money for hotels. The festivities started on Wednesday night with the Pete Fountain and Clyde Kerr orchestras playing on a midnight steamboat ride.

The first Jazz Fest lineup included Mahalia Jackson (who was not booked, but simply heard about the Festival and showed up to sing), the Preservation Hall Jazz Band, Duke Ellington, Pete Fountain, Al Hirt, Clifton Chenier, Fats Domino, and The Meters This first lineup received an audience of 350 people, but the numbers grew every year, especially after the introduction of a limited edition silkscreen poster series in 1975. By the end of the 1980s, attendance peaked at 300,000. In 2001, when Louis Armstrong's centennial was celebrated, 650,000 people attended. The poster series has been very popular with collectors. The first poster was designed by Sharon Dinkins and Thorn Grafton. Posters feature a performer or the overall theme of the Festival, and all posters are commissioned by the Festival. In 1998, the Festival added the Congo Square poster series. Artists such as George Dureau, James Michalopoulos, George Rodrigue, Douglas Bourgeois, Duke Jupiter, John Scott, and Bill Hemmerling have been designers of the official festival poster. Congo Square posters have been created by Aziz Diagne, Elizabeth Catlett, Bill Pajaud, and Terrance Osborne. Osborne designed the poster for 2012 (as well as the 2007 and 2010 posters), which featured Trombone Shorty. 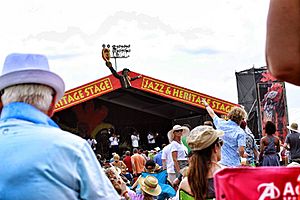 Jazz and Heritage Stage at the 2014 Jazz Fest

The Board of Directors for the New Orleans Jazz and Heritage Foundation, Inc. is made up of four parts: the Voting Board (30 community members), the Executive Board (President, Vice-President, Secretary, etc.), the Advisory Council (20 non-voting members), and the Past Presidents Senate (15 members). In addition, the Board is split into various committees. Board members serve three year terms, though there is no limit placed on the number of terms. Elections are held annually. Advisory Council members may only serve for two consecutive three year terms, however. Governance does not change much from year to year. Board members are not officially compensated, but they are given perks such as dozens of free tickets. 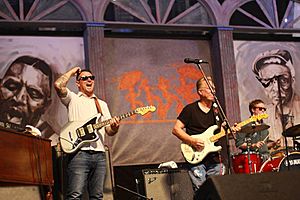 SInce 1979, the nonprofit arm of the organization has given over $1 million in grants to local schools, artists, and musicians.

The festival has featured a variety of musicians and performers every year since its founding, ranging from Louisiana musicians to international pop stars. Many popular New Orleans musicians have played annually for long stretches over the history of the festival such as the Neville Brothers, Dr. John, Ellis Marsalis, and The Radiators.

Applications to perform (from the general public) are limited to bands from Louisiana to promote and preserve local culture. 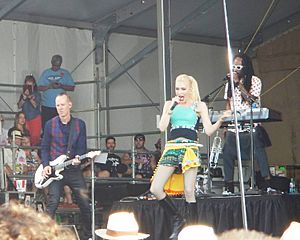 No Doubt perform at the New Orleans Jazz & Heritage Festival on May 1, 2015

There are 12 music stages and tents of various sizes, as well as two food stages, set up at the Festival. The following are the stages for 2015, and they are listed roughly in the order of capacity.