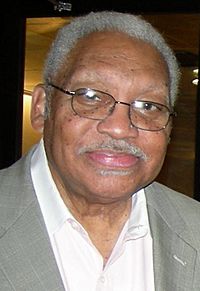 Ellis Louis Marsalis Jr. (November 14, 1934 – April 1, 2020) was an American jazz pianist and educator. Marsalis became known in the 1980s and 1990s. He was a member of a well known musical family in New Orleans, with sons Branford Marsalis and Wynton Marsalis becoming internationally known. He was born in New Orleans.

In the 1950s and 1960s he worked with Ed Blackwell, Cannonball Adderley, Nat Adderley, and Al Hirt. During the 1970s he taught at the New Orleans Center for Creative Arts. His students have included Terence Blanchard, Harry Connick Jr., Donald Harrison, Kent Jordan, Marlon Jordan, and Nicholas Payton.

In 2008, Marsalis was added into The Louisiana Music Hall of Fame.

On April 1, 2020, Marsalis died at the age of 85 after being hospitalized in New Orleans with COVID-19 symptoms.

All content from Kiddle encyclopedia articles (including the article images and facts) can be freely used under Attribution-ShareAlike license, unless stated otherwise. Cite this article:
Ellis Marsalis Jr. Facts for Kids. Kiddle Encyclopedia.