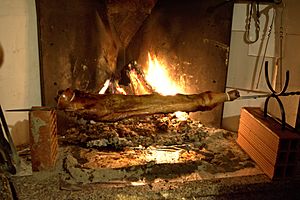 A suckling pig is a piglet fed on its mother's milk. It is between the ages of two and six weeks. It is traditionally cooked whole, often roasted, in various cuisines. It is usually prepared for special occasions and gatherings.

The meat from suckling pig is pale and tender and the cooked skin is crisp and can be used for pork rinds. The texture of the meat can be somewhat gelatinous.

There are many ancient recipes for suckling pig from Roman and Chinese cuisine. Since the pig is one of the first animals domesticated by human beings for slaughter, many references to pigs are found in human culture. The suckling pig, specifically, appears in early texts such as the sixth-century Salic law. As an example of a law governing the punishment for theft, Title 2, article 1, is, in Latin, Si quis porcellum lactantem furaverit, et ei fuerit adprobatum (malb. chrane calcium hoc est) CXX dinarios qui faciunt solidos III culpabilis iudicetur. "If someone has stolen a suckling pig and this is proven against him, the guilty party will be sentenced to 120 denarii which adds up to three solidi (Latin coins)." The words "chrane calcium" are written in Frankish; "calcium" (or "galza" in other manuscripts) is the gloss for "suckling pig"; porcellum lactantem. These glosses in Frankish, the so-called Malbergse Glossen, are considered the earliest attested words in Old Dutch.

There are various preparations for suckling pig in Western and Asian cuisines. The most popular preparation can be found in northern Spain, namely Segovia.

Lechón is a pork dish in several regions of the world, most specifically Spain and its former colonial possessions. The word lechón originated from the Spanish term leche (milk), alluding to the immaturity of the piglet. Lechón is a popular item in the cuisine in Los Angeles, Spain, Cuba, Puerto Rico, Honduras, Argentina, Uruguay, Bolivia, Ecuador, Perú, Costa Rica, the Dominican Republic, and other Spanish-speaking nations in Latin America. In Spanish cuisine, cochinillo asado is commonly used to refer to roast piglet, as lechón has drifted linguistically to mean any roasted pig. In most of these regions, lechón is prepared throughout the year for special occasions, during festivals.

In Asia, roast suckling pig is eaten in Chinese or Vietnamese restaurants for important parties. It is also a popular dish at wedding dinners or a party for a baby's completion of its first month of life.

In the former Spanish colony of the Philippines, lechón (Filipino: litsón) is considered a national dish. As the usage of the term has evolved over the years, "lechón" has now come to refer to roasted pig in general (including suckling pigs). Suckling pigs in the country are referred to as lechón de leche, which corresponds to the term cochinillo in Spain.

There is also variant of suckling pig among the Indonesian non-Muslim ethnic groups, such as the Balinese, Batak, and Minahasa. Some pork dishes are also influenced by ethnic Chinese.

The European cuisines of Romania, Portugal (leitão), Spain, Germany, Austria, Albania, Croatia, Italy, Slovenia, Serbia, Macedonia and Georgia favor it highly as well. It also accompanies goose as the traditional Christmas feast of families in Russia and Serbia. Russian Navy maintains a tradition of presenting a roast piglet (or several) to the crew of a ship returning from deployment.

Suckling pig is known in German and Austrian cuisine as Spanferkel. It can be roasted in the oven or grilled, and is often served at festive occasions such as Oktoberfest.

In Sweden suckling pig is called spädgris, it is usually cooked in the oven, or sometimes roasted directly over the fire. It is often stuffed with various fruits such as apples and plums, together with butter and breadcrumbs.

The suckling pig is used in Cajun cuisine in the southern U.S., where the Cochon de Lait festival is held annually in the small town of Mansura, Louisiana. During this festival, as its name implies, suckling pigs are roasted. Other uses for the suckling pig in the U.S. include slow roasting in an oven or (as in a Hawaiian-style pig roast) in a pit. The latter remains popular in the cuisine of the Southern United States.

All content from Kiddle encyclopedia articles (including the article images and facts) can be freely used under Attribution-ShareAlike license, unless stated otherwise. Cite this article:
Suckling pig Facts for Kids. Kiddle Encyclopedia.