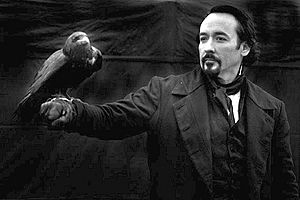 Cusack as Edgar Allan Poe in The Raven

Cusack was born at St. Joseph Hospital in Chicago's Lakeview neighborhood and grew up in Evanston, Illinois. They moved from Manhattan, New York to Illinois. Cusack graduated from Evanston Township High School in 1984, where he met Jeremy Piven, and spent a year at New York University before dropping out, saying that he had "too much fire in his belly". 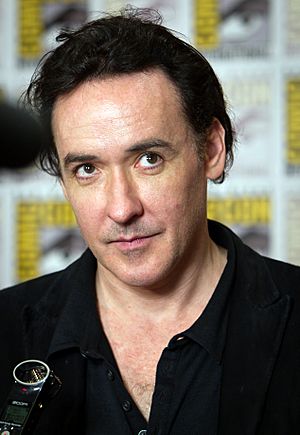 Cusack is a fan of both the Chicago Cubs and the Chicago White Sox. He led the crowd in a performance of "Take Me Out to the Ball Game" at Wrigley Field. He was in attendance, along with fellow Cubs fans: Bill Murray, Eddie Vedder and Bonnie Hunt, during the Cubs' historic Game Seven victory during the 2016 World Series. Cusack appeared in multiple Chicago Bears games and attended many Stanley Cup Finals games in support of the Chicago Blackhawks.

He trained in kickboxing under former world kickboxing champion Benny Urquidez for over two decades. He began training under Urquidez in preparation for his role in Say Anything... and holds the rank of a level six black belt in Urquidez's Ukidokan Kickboxing system. He is well known for being a bachelor.

All content from Kiddle encyclopedia articles (including the article images and facts) can be freely used under Attribution-ShareAlike license, unless stated otherwise. Cite this article:
John Cusack Facts for Kids. Kiddle Encyclopedia.