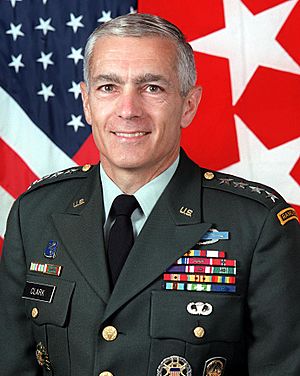 Wesley Kanne Clark, Sr. (born December 23, 1944) is a retired general of the United States Army. He spent 34 years in the U.S. Army. He was honored with the Presidential Medal of Freedom. Clark was born in Chicago.

In 2004, he unsuccessfully ran for the Democratic nomination for President of the United States.

All content from Kiddle encyclopedia articles (including the article images and facts) can be freely used under Attribution-ShareAlike license, unless stated otherwise. Cite this article:
Wesley Clark Facts for Kids. Kiddle Encyclopedia.