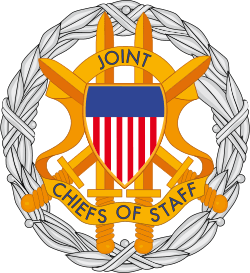 The JCS consists of a Chairman and Vice Chairman appointed by the President, and the Chiefs of service from the four branches of the armed services.

Similar organizations, sometimes known as Chiefs of Staff Committees (COSCs) in the Commonwealth of Nations, are common in other countries.

All content from Kiddle encyclopedia articles (including the article images and facts) can be freely used under Attribution-ShareAlike license, unless stated otherwise. Cite this article:
Joint Chiefs of Staff Facts for Kids. Kiddle Encyclopedia.