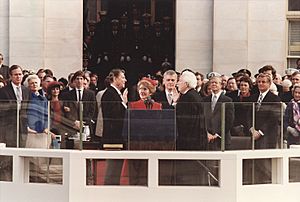 On the same day, hostages from the Iran hostage crisis are released as Reagan is sworn in as President.

All content from Kiddle encyclopedia articles (including the article images and facts) can be freely used under Attribution-ShareAlike license, unless stated otherwise. Cite this article:
First inauguration of Ronald Reagan Facts for Kids. Kiddle Encyclopedia.