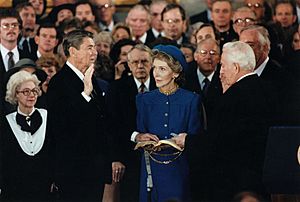 Ronald Reagan was inaugurated as the 40th President of the United States in January 1985. This was the beginning of Reagan's second term as President. George H. W. Bush was also inaugurated as Vice President for the second time.

There were two separate ceremonies. A private ceremony was held on January 20, and another was held publicly on January 21. This was done because the normal day for a Presidential inauguration, January 20, was a Sunday.

Reagan was sworn in as President during the private ceremony. It was held in the Grand Foyer of the White House. It was broadcast on television. The next day, Reagan took the oath in public under Chief Justice Warren E. Burger.

All content from Kiddle encyclopedia articles (including the article images and facts) can be freely used under Attribution-ShareAlike license, unless stated otherwise. Cite this article:
Second inauguration of Ronald Reagan Facts for Kids. Kiddle Encyclopedia.