Fort Irwin National Training Center is a major training area for the United States military in the Mojave Desert in northern San Bernardino County, California. Fort Irwin is at an average elevation of 2,454 feet (748 m). It is located 37 miles (60 km) northeast of Barstow, in the Calico Mountains.

The National Training Center is part of the US Army Forces Command (FORSCOM). The opposing force at the National Training Center (NTC) is the 11th Armored Cavalry Regiment, the Blackhorse Cavalry, who are stationed at the base to provide an opposing force to units on a training rotation at Fort Irwin. In September 2017, a state-of-the-art hospital was opened that provides healthcare services to the Fort Irwin beneficiaries.

Fort Irwin works within the R-2502 Special Use Airspace Complex.

The Fort Irwin area has a history dating back almost 15,000 years, when Native Americans of the Lake Mojave Period were believed to live in the area. Native American settlements and pioneer explorations in the area were first recorded when Father Francisco Garces, a Spaniard, traveled the Mohave Indian Trail with Mohave guides in 1776. During his travels, he noted several small bands of Indians and is believed to have been the first European to make contact with the Native Americans of this area.

Jedediah Smith is thought to have been the first American to explore the area in 1826. A fur trapper, Smith was soon followed by other pioneers traveling the Old Spanish Trail between Santa Fe and Los Angeles. The trail crossed the area on the eastern edge of Fort Irwin, between Salt Spring and the Mojave River. The Old Spanish Trail passed through Silurian Valley, then west through the Avawatz Mountains at Red Pass and beyond the playa of Red Pass Lake, through a gap between the Soda and Tiefort Mountains to Bitter Spring in a wash in the next valley. Bitter Spring was the only reliable watering and grazing place along the route. From Bitter Spring the trail led 18.75 miles southwest climbing Alvord Mountain to cross Impassable Pass to descend Spanish Canyon and cross the plains to the location of Fork of the Road on the north side of the Mojave River where it met the Mohave Trail.

In 1844, Captain John C. Fremont, accompanied by Kit Carson, was the first member of the US Army to visit the Fort Irwin area. Captain Fremont established a camp near Bitter Springs as he pioneered a route that served travelers on the Old Spanish Trail, and later the Mormon Road, linking Salt Lake City to California. This camp was later to become an important water and grazing place for pioneers crossing the Mojave Desert during California's settlement and gold rush.

The California Gold Rush brought prosperous trade and unexpected trouble to the area. As California grew, and more travelers and freighters used the Mormon Road to cross the territory between California and Utah, raids and horse stealing became a problem. In 1847, the Army's Mormon Battalion patrolled the Fort Irwin area to control the raiding and horse stealing. By 1855 it became part of the route of the freight wagon road between Los Angeles and Salt Lake City. During the Bitter Spring Expedition in 1860 the Army constructed Camp Bitter Springs, a small stone fort overlooking Bitter Spring and patrolled the Fort Irwin area.

In the 1880s the area experienced an economic boom with the discovery of borax at Death Valley. From the late 19th century to the early 20th century, the area began to grow tremendously as mining operations of all types flourished. Soon railroads, workers, and businesses led to the establishment of the nearby town of Barstow.

The years following the Indian Wars were quiet militarily. In 1940, President Franklin D. Roosevelt established the Mojave Anti-Aircraft Range, a military reservation of approximately 1,000 square miles (3,000 km2) in the area of the present Fort Irwin. In 1942, the Mojave Anti-Aircraft Range was renamed Camp Irwin, in honor of Major General George LeRoy Irwin, commander of the 57th Field Artillery Brigade during World War I, and it was subsumed into the Desert Training Center as one of its cantonment areas and some of its ranges. Two years later, Camp Irwin was deactivated and placed on surplus status.

Camp Irwin reopened its gates in 1951 as the Armored Combat Training Area and served as a training center for combat units during the Korean War. Regimental tank companies of the U.S. 43d Infantry Division from Camp Pickett, Virginia were the first to train at the new facility.

The post was designated a permanent installation on 1 August 1961 and renamed Fort Irwin. During the Vietnam buildup, many units, primarily artillery and engineer, trained and deployed from Fort Irwin.

In January 1971, the post was deactivated again and placed in maintenance status under the control of Fort MacArthur (Los Angeles), California. The California National Guard assumed full responsibility for the post in 1972. From 1972 to late 1980, Fort Irwin was used primarily as a training area by the Army National Guard and U.S. Army Reserve. 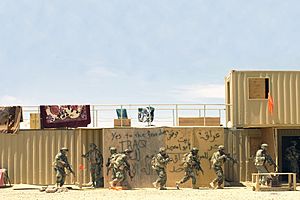 Soldiers move forward to search a building during training at the National Training Center. Long known for large-scale tank vs. tank battles, NTC now provides extensive training in urban operations as of 1 September 2005. 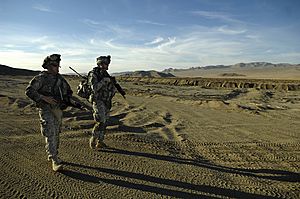 Troops from the 3rd Infantry patrol the California desert during a training mission.

On 9 August 1979, the Department of the Army announced that Fort Irwin had been selected as the site for the National Training Center. With over 1,000 square miles (2,600 km2) for maneuver and ranges, an uncluttered electromagnetic spectrum, airspace restricted to military use, and its isolation from densely populated areas, Fort Irwin was an ideal site for this facility. The National Training Center was officially activated 16 October 1980, and Fort Irwin was transferred from the California Army National Guard back to the Regular Army and returned to active status on 1 July 1981.

Since its activation, the National Training Center has witnessed many firsts. The first units to train against the Opposing Force (OPFOR) at the NTC were from among others the 3rd Battalion 67th Armor 2nd Armored Division from Fort Hood Texas operation named TASK FORCE IRWIN III, 1 Aug - 14 Sept 1979.. 3rd Brigade, U.S. 1st Cavalry Division from Fort Hood Texas. in spring 1981. Also Ft Irwin and the 1st CAV tested and implemented the M.I.L.E.S., Multiple Integrated Laser Engagement System. Infantry and armor units first augmented the Opposing Force in 1984 as a detachment of the 7th infantry Division, Fort Ord CA. June 1985 saw the first use of M1 Abrams tanks and later in the fall of 1985 saw the M2 Bradley fighting vehicles on the National Training Center battlefield. The first armored cavalry squadron rotation occurred in November 1984. Units from the 101st Airborne Division participated in the first light force rotation in March 1985. The 197th Infantry Brigade participated in the first extended rotation with brigade operations in June 1985. The first combined Light/Mechanized Infantry rotation took place in February 1990; the 7th Infantry Division (Light) from Fort Ord and the 24th Infantry Division (Mechanized) from Fort Stewart, Georgia participated. The first MOUT (Military Operations in Urban Terrain) mission was conducted at the National Training Center Pioneer Training Facility in December 1993.

During the re-opening of the National Training Center in 1980, the OPFOR consisted of a detachment of infantry from the 7th Infantry Division US Army based in Fort Ord, California, and the 1st Bn, 73rd Armor. Once the US Army turned to regimental units in 1985, the OPFOR was designated the 177th Armored Brigade (SEP). The OPFOR soldiers wore Soviet-style armor uniforms including black berets and Soviet-style insignias, and used M551 Sheridan tanks visually modified to resemble BMP-1 vehicles and T-72 tanks. Units from the U.S. Marine Corps (USMC) and the U.S. Army Reserve and Army National Guard would support infantry roles for the OPFOR.

During the 1980s and 1990s, the National Training Center also showcased U.S. Army large-scale tactics to foreign military leaders from all over the world. The OPFOR ran 15 training rotations a year against armored brigades from Active Component and Reserve Component U.S. Army units from all over the United States. The command centers of the large-scale battles were computerized in a central command post, where each battle was recorded, analyzed, and the results subsequently debriefed to participants.

The National Training Center and Fort Irwin continues to serve as the Army's premier training center. After the September 11, 2001 attacks, the National Training Center transformed to focus on continuous counterinsurgency operations that reflected an ongoing and rapidly changing battlefield, especially in African/Middle Eastern/Southwest Asian-focused desert environments.

NTC rotations incorporate a complex scenario design laden with social, ethical and moral dilemmas; the goal of which is to develop leaders while exposing them to multifaceted problems. Units training at the NTC today face a complex hybrid threat. Units must face a near-peer opposing force, while taking on an insurgent force. At the same time, they must assist the local towns and villages in any way possible.

Observer, Controller and Trainers (OCTs) are embedded with the training units down to Platoon Level.

Some of the villages are completely instrumented, including video recording, to assist the OC/T teams in providing feedback to the rotational training unit

One of the features of the base is the presence of 12 mock "villages" which are used to train troops in Military Operations in Urban Terrain (MOUT) prior to their deployment. The villages mimic real villages and have variety of buildings such as religious sites, hotels, traffic circles, etc. filled with foreign language speaking actors portraying government officials, local police, local military, villagers, street vendors, and insurgents. The largest two are known as Razish and Ujen, the closest located about 30 minutes from the main part of the post. Most of the buildings are created using intermodal containers, stacked to create larger structures, the largest village consists of 585 buildings that can engage an entire brigade combat team into a fight.

All of the military services train at the National Training Center, as well as other government agencies, and foreign military units.

It is a common tradition for any military unit visiting the installation to paint a design on one of the large rock formations near the main gate. Units of all types and locations are represented.

Fort Irwin Solar Project will be the largest renewable energy project in the Department of Defense's history. The initial development plan is expected to result in more than 500 MW of renewable energy with one billion kilowatt-hours (kWh) of solar power generated per year by 2022. The $2-billion Fort Irwin Solar Project will create jobs both during construction and long-term plant operations, as well as generate additional revenue for local businesses.

Within its territory on its western side lies the Goldstone Deep Space Communications Complex. The ZIP Code is 92310 and the reservation is inside area codes 442 and 760.

According to the 2010 United States Census, Fort Irwin had a median household income of $50,469, with 12.6% of the population living below the federal poverty line.

The Fort Irwin Solar Project, launched in 2009, will be the largest renewable energy project in the DoD's history. This plan is expected to result in more than 500 MW of renewable energy with one billion kilowatt-hours (kWh) of solar power generated per year by 2022.

All content from Kiddle encyclopedia articles (including the article images and facts) can be freely used under Attribution-ShareAlike license, unless stated otherwise. Cite this article:
Fort Irwin National Training Center Facts for Kids. Kiddle Encyclopedia.