Barstow is a city in San Bernardino County, California, United States. The population was 22,639 at the 2010 census. Barstow is located 55 miles (89 km) north of San Bernardino.

Barstow is a major transportation center for the Inland Empire. Several major highways including Interstate 15, Interstate 40, California State Route 58, and U.S. Route 66 converge in the city. It is the site of a large rail classification yard, belonging to the BNSF Railway. The Union Pacific Railroad also runs through town using trackage rights on BNSF's main line to Daggett 10 miles (16 km) east, from where it heads to Salt Lake City and the BNSF heads to Chicago. Barstow is about 62 miles (100 km) from Baker, California and 111 miles (179 km) from Primm, Nevada. Barstow is almost exactly midway between Los Angeles, California (130 miles (210 km) southwest) and Las Vegas, Nevada (125 miles (201 km) northeast).

Barstow is home to Marine Corps Logistics Base Barstow and is the closest city to the Fort Irwin National Training Center.

The settlement of Barstow began in the late 1830s in the Mormon Corridor. Every fall and winter, as the weather cooled, the rain produced new grass growth and replenished the water sources in the Mojave Desert. People, goods and animal herds would move from New Mexico and later Utah to Los Angeles, along the Old Spanish Trail from Santa Fe, or after 1848, on the Mormon Road from Salt Lake City. Trains of freight wagons traveled back to Salt Lake City and other points in the interior. These travelers followed the course of the Mojave River, watering and camping at Fish Ponds on its south bank (west of Nebo Center) or 3.625 miles up river on the north bank, at a riverside grove of willows and cottonwoods, festooned with wild grapes, called Grapevines (later the site of North Barstow). In 1859, the Mojave Road followed a route was established from Los Angeles to Fort Mojave through Grapevines that linked eastward with the Beale Wagon Road across northern New Mexico Territory to Santa Fe.

Indian troubles with the Paiute, Mojave and Chemehuevi tribes followed and from 1860 Camp Cady, a U.S. Army post 20 miles (32 km) east of Barstow, was occupied sporadically until 1864, then permanently, by soldiers occupying other posts on the Mojave Road or patrolling in the region until 1871. Trading posts were established at Grapevines and Fish Ponds that supplied travelers on the roads and increasingly the miners that came into the Mohave Desert after the end of hostilities with the native people.

Barstow's roots also lie in the rich mining history of the Mojave Desert following the discovery of gold and silver in the Owens Valley and in mountains to the east in the 1860s and 1870s. Due to the influx of miners arriving in Calico and Daggett, railroads were constructed to transport goods and people. The Southern Pacific built a line from Mojave, California through Barstow to Needles in 1883. In 1884, ownership of the line from Needles to Mojave was transferred to the Santa Fe Railroad. Paving the major highways through Barstow led to further development of the city. Much of its economy depends on transportation. Before the advent of the interstate highway system, Barstow was an important stop on both Routes 66 and 91. The two routes met in downtown Barstow and continued west together to Los Angeles.

The average annual precipitation is 4.12 inches (10.5 cm), with nearly 70% of rain typically falling during the cooler months (Nov–Apr). Snowfall is uncommon in winter, occurring every year or two. There are an average of 24 days annually with measurable precipitation.

The native vegetation is dominated by high and low desert shrubs such as creosote bush. City residents have introduced many non-native plants, prominent among which are trees such as Aleppo pine, Italian cypress, fan palm, ailanthus, ash, palo verde and redbud.

There were 7,647 households out of which 36.7% had children under the age of 18 living with them, 45.4% were married couples living together, 17.7% had a female householder with no husband present, and 31.3% were non-families. 25.9% of all households were made up of individuals and 8.5% had someone living alone who was 65 years of age or older. The average household size was 2.7 and the average family size was 3.3. 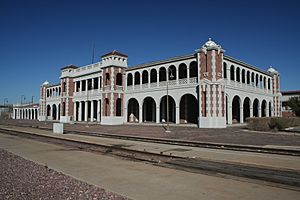 Historic Casa del Desierto ("House of the Desert") in Barstow

Barstow has a series of murals along Main Street, depicting scenes from the city's history. These murals were created by Main Street Murals, a local non-profit organization.

Barstow Branch Library is located at 304 E. Buena Vista Street. It is a community venue, running various activities such as a summer reading program for children, story and craft sessions as well as a mystery book club.

Skyline Drive-In, a drive-in theater located in the north-east outskirts of the city at 31175 Old Highway 58, is one of the last operating in San Bernardino County. It has two screens; each screen shows two movies every night.

Hollywood Theatre Barstow Cinema 6 is the city's indoor cinema. It has six screens and can be found at 1503 East Main Street, in the east side of the city. As of September 30, 2011, Skyline Drive-In took over Hollywood Theatre, changing its name back to Barstow Station Cinema. 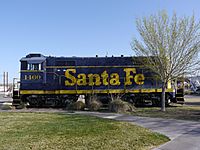 Barstow has a number of museums: Mojave River Valley Museum, Route 66 Mother Road Museum, the Western America Rail Museum, and the Desert Discovery Center. Once a year a family opens their Black History collection to the public and nearby Fort Irwin is home to the 11 Cavalry and ACR Museum. The Old Woman meteorite, the largest meteorite found in California and the second largest in the United States, is housed in the Desert Discovery Center.

The Casa Del Desierto, built in 1911 as a Harvey House hotel and train station, now houses the Route 66 Mother Road Museum, the Western America Railroad Museum and still functions as an (unstaffed) Amtrak station. The Barstow Chamber of Commerce sponsors an annual sandcastle contest in the dry riverbed across from the Harvey House.

Opened in 1975 and operating 365 days a year, Barstow Station serves 20,000 tour buses a year and is a popular stop for travelers on Interstate 15. The site includes a number of gift shops, an ice cream parlour, a Panda Express, Popeyes Louisiana Kitchen, KHWY radio station and a Greyhound ticket terminal. In November 2013, Dunkin' Donuts opened inside Barstow Station, becoming only the second location of that chain within the entire state of California (following a shop on Camp Pendleton) and the first to be accessible to the general public. The McDonald's restaurant at Barstow Station consists of three side-by-side railroad cars—a reference to Barstow's railroad heritage. In September 1986, the restaurant was destroyed by fire when a customer's car burst into flames at the drive-up window. In June 1997, the re-built restaurant received national attention when a gunman opened fire during a botched robbery, injuring several people and killing a nine-year-old girl. The gunman was mortally wounded by an off-duty police officer after the ensuing gun battle and later died in hospital.

Located southwest of the town is the upscale Tanger Center Barstow, of Tanger Factory Outlet Centers chain, which is a popular stop for tourists traveling between Greater Los Angeles and Las Vegas. An older shopping center of outlet stores, the Barstow Factory Outlet, is located opposite the Tanger Outlet Center.

The town has an enclosed shopping mall, Barstow Mall, built in the 1970s. It was renovated in 2010 and is attracting new tenants, including the County of San Bernardino's new social service office for the Transition Assistance Department and Children and Family Services.

Calico Ghost Town is one of the few remaining original mining towns of the western United States, now preserved as a museum by Walter Knott.

Rainbow Basin is an Area of Critical Environmental Concern due to landscape features and paleontological resources in the area. Located 8 miles (13 km) north of Barstow, its diverse landscape, multi-colored rock formations and scenic canyons are popular with photographers, hikers and campers keen to experience the area's natural beauty. The fossiliferous Barstow Formation (Miocene) is well exposed there. Rainbow Basin is managed by the Bureau of Land Management's Barstow Field Office.

The Solar Project is located in Daggett, CA, about 10 miles (16 km) east of Barstow.

The city also has the Dana Park Community Center open on weekdays, the Cora Harper Fitness Center and Tennis Courts open Monday to Saturday, and the outdoor Eda Henderson Pool open Tuesdays to Sundays throughout the school summer holidays.

Founded in the 1970s by two local residents, the thriving Barstow Senior Center serves Barstow's seniors. In addition to daily, weekly and monthly activities, there is also an onsite thrift store and lunches are served every weekday. The center is funded via annual membership fees and sponsorship.

All content from Kiddle encyclopedia articles (including the article images and facts) can be freely used under Attribution-ShareAlike license, unless stated otherwise. Cite this article:
Barstow, California Facts for Kids. Kiddle Encyclopedia.