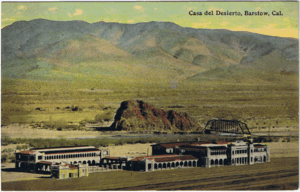 The Casa del Desierto station and hotel was built in 1911 by the Atchison, Topeka and Santa Fe Railway to replace an earlier one built in 1885 that burned in 1908. The Santa Fe closed the station in 1973. It became derelict until bought by the City of Barstow, and rebuilt following heavy damage in a 1992 earthquake.

The building is a synthesis of Spanish Renaissance and Classical Revival architecture styles, with a Moorish feeling as well. The concrete frame is faced with red tapestry brick and beige artificial stone. Majestic arcades and colonnades line the facade, providing shade from the desert sun. Red clay barrel tiles are used to cover the roof. Towers at the building's corners, and those of the central projecting bay facing the tracks, are capped with pointed roofs or painted domes.

Francis W. Wilson is the architect credited by the Historic American Buildings Survey of the National Park Service. Amtrak's Great American Stations site says that "according to contemporary accounts, the Casa del Desierto ... was designed by Francis W. Wilson of Santa Barbara, Calif." Earlier Wilson had designed the Fray Marcos hotel in Williams, Arizona, and El Garces in Needles for the Santa Fe and Fred Harvey.

The historic structure is the finest remaining depot-hotel in California, an elegant presence in the Mojave Desert beside the intermittent Mojave River. In the 1950s, the Barstow Harvey House was listed in the Green Book guide of business establishments that were friendly to African-American motorists.

Casa del Desierto was added to the National Register of Historic Places in 1975, and designated as a California Historical Landmark in 1976.

The City of Barstow obtained the station in 1990. After restoration and more than $8 million in repairs to earthquake damage, several city offices moved into the building. The Barstow Area Chamber of Commerce & Visitor Center also operates out of the former Harvey House. Other public institutions located here are the Western America Railroad Museum on the east side and the Route 66 "Mother Road" Museum on the north side.

All content from Kiddle encyclopedia articles (including the article images and facts) can be freely used under Attribution-ShareAlike license, unless stated otherwise. Cite this article:
Barstow Harvey House Facts for Kids. Kiddle Encyclopedia.