Needles (Mojave: ʼAha Kuloh) is a city in San Bernardino County, California, United States. It lies on the western banks of the Colorado River in the Mohave Valley subregion of the Mojave Desert, near the borders of Arizona and Nevada and roughly 110 miles (180 km) from the Las Vegas Strip. It is also the easternmost city of the Greater Los Angeles area. The city is accessible via Interstate 40 and U.S. Route 95. The population was 4,844 at the 2010 census, up from 4,830 at the 2000 census.

Needles was named after "The Needles", a group of pinnacles, mountain peaks in the Mohave Mountains on the Arizona side of the river to the south of the city. The large Mohave Native American community shares the nearby Fort Mojave Indian Reservation and the town. Needles is a gateway to the Mojave National Preserve.

"Ancient petroglyphs, pictographs, intaglios art, and old trails and stonework sites, bear witness to those who came from an earlier time."

The Mohave, one of the traditional Colorado River Indian Tribes, are Native Americans that have been living in the Mojave Valley area for thousands of years prior to the European exploration of the area. In the Mohave language, they call themselves the ʼAha Makhav. Their name comes from two words: ʼaha, meaning 'river', and makhav, meaning 'along or beside', and to them it means 'people who live along the river'.

The historic Mojave Road now goes through the Mojave National Preserve. Along it, in 1859, Fort Mojave was built to protect new pioneer immigrants to California and other travelers from the Mohave.

The city was founded in May 1883 as a result of the construction of the Atchison, Topeka and Santa Fe Railway which originally crossed the Colorado River at this point. The name was derived from the Needles, pointed mountain peaks where the wind-blown holes in them (which can only be seen by boat from the Colorado River), at the south end of the valley. This point on the Colorado River was a poor site for such a bridge, lacking firm banks and a solid bottom. Additionally, the bridge was not of the best quality, which led to criticism that it was a "flimsy looking structure", and was an obstruction to navigation since it lacked a draw to allow boat traffic. The flooding and meandering of the Colorado River destroyed the bridge in 1884, 1886 and 1888. Finally the railroad surrendered to nature and built a high cantilever bridge at a much narrower point with solid rock footings, ten miles downstream near modern Topock, completing it in May 1890.

Originally a tent town for railroad construction crews, the railroad company built a hotel, car sheds, shops and a roundhouse. Within a month the town also boasted a Chinese washhouse, a newsstand, a restaurant, a couple of general stores, and nine or ten saloons. The town became the largest port on the river above Yuma, Arizona. The Railway and the Fred Harvey Company built the elegant Neoclassical and Beaux-Arts style El Garces Hotel and Santa Fe Station in 1908 which was considered the "Crown Jewel" of the entire Fred Harvey chain. The landmark building is on the National Register of Historic Places and is being restored.

Needles was a major stop on the historic U.S. Route 66 highway from the 1920s through the 1960s. For immigrants from the Midwest Dust Bowl in the 1930s it was the first town that marked their arrival in California. The city is lined with motels and other shops from that era. The "Carty's Camp" which appears briefly in The Grapes of Wrath as the Joad family enters California from Arizona is now a ghost tourist court, its remains located behind the 1946-era 66 Motel.

In 1949 the US Bureau of Reclamation began a mass project to dredge a new channel for the Colorado River that would straighten out a river bend that was causing massive silt problems since the Hoover Dam was completed.

Needles is a tourism and recreation center, a tradition going back for decades. The city is the eastern gateway to the Mojave National Preserve, a scenic desert National Park.

Needles, like Death Valley to the northwest, is known for extreme heat during the summer. The city has a subtropical desert climate. Temperatures often reach 120 °F (49 °C) in late July and early August. The Needles weather station is frequently reported by the United States government's National Oceanic and Atmospheric Administration (NOAA) as the site of the highest daily temperature recorded in the U.S. during the desert summers. Needles occasionally sets national or world daily temperature records.

On August 13, 2012, Needles experienced a thunderstorm that deposited rain at a temperature of 115 °F (46 °C) starting at 3:56 PM, setting a new record for the hottest rain in world history. The air temperature was 118 °F (48 °C), tying Needles' record high for the date. Since the humidity was only 11%, the rain evaporated so that "only a trace of precipitation was recorded in the rain gauge". Weather records researcher Maximiliano Herrera reported that this was the lowest humidity at which rain has occurred on Earth in recorded history.

The city is also known for moderate to locally severe thunderstorms during the monsoon season as well as humid conditions.

There were 1,940 households out of which 31.2% had children under the age of 18 living with them, 42.5% were married couples living together, 16.8% had a female householder with no husband present, and 34.6% were non-families. 29.0% of all households were made up of individuals and 13.1% had someone living alone who was 65 years of age or older. The average household size was 2.5 and the average family size was 3.0.

Major employment in the city is supported by the BNSF Railway (formerly the Santa Fe Railroad). The depot has been a terminal (crew change point) for the railway since the late 19th century. The railroad company has been the city's main employment source for over a century. 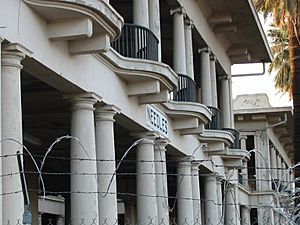 The El Garces Hotel, a Harvey House, undergoing restoration in 2007

According to the 2010 United States Census, Needles had a median household income of $29,613, with 28.8% of the population living below the poverty line.

In the 1993 film Suture, the town of Needles is a key element of the plot.

Well I never been to England, but I kinda like the Beatles. Well, I headed for Las Vegas, only made it out to Needles. Can you feel it? Must be real. It feels so good!

We pulled into a truck stop Somewhere just outside of Needles California, You asked me for ten bucks and I said “What about the last ten bucks I loaned you?” 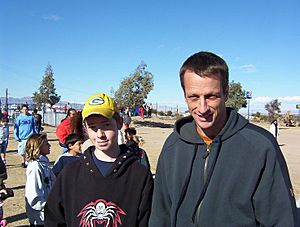 Tony Hawk at the opening of the Needles Skate Park on January 3, 2004.

All content from Kiddle encyclopedia articles (including the article images and facts) can be freely used under Attribution-ShareAlike license, unless stated otherwise. Cite this article:
Needles, California Facts for Kids. Kiddle Encyclopedia.