Charles Monroe Schulz (November 26, 1922 – February 12, 2000), nicknamed Sparky, was an American cartoonist best known for the comic strip Peanuts (which featured the characters Charlie Brown and Snoopy, among others). He is widely regarded as one of the most influential cartoonists of all time, cited as a major influence by many later cartoonists, including Calvin and Hobbes creator Bill Watterson. 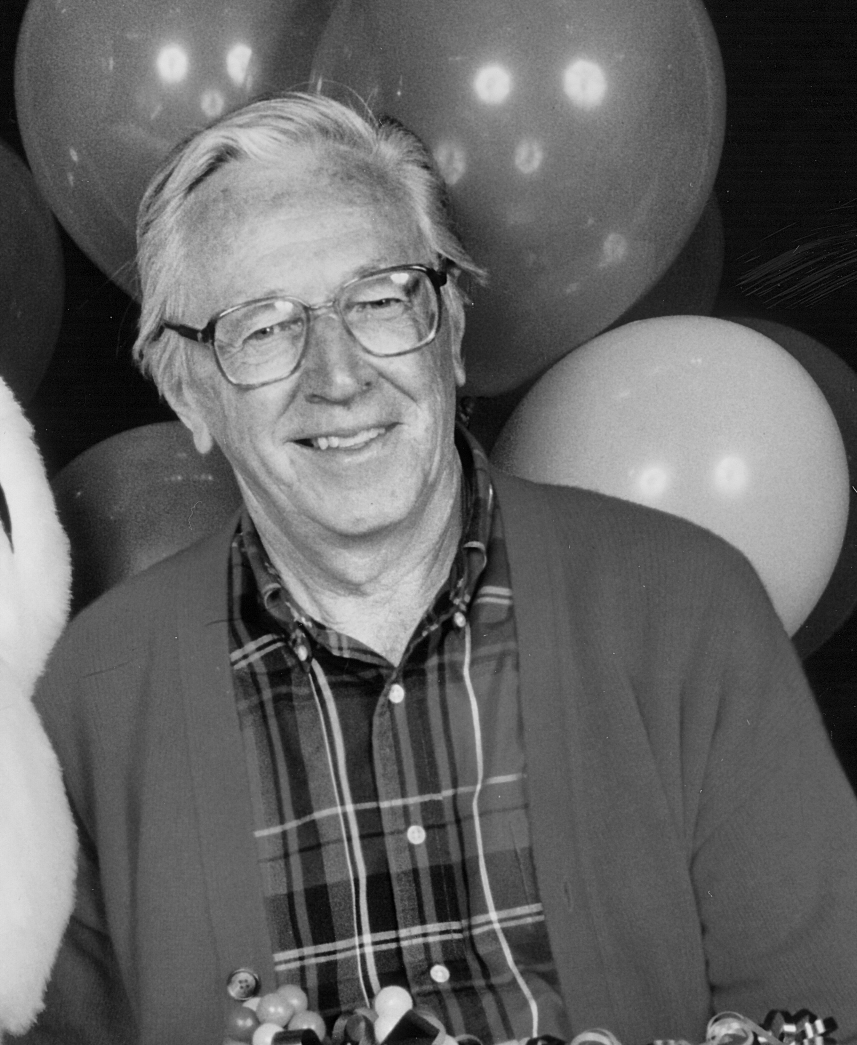 Schulz's first group of regular cartoons, a weekly series of one-panel jokes entitled Li'l Folks, was published from June 1947 to January 1950 in the St. Paul Pioneer Press, with Schulz usually doing four one-panel drawings per issue. It was in Li'l Folks that Schulz first used the name Charlie Brown for a character, although he applied the name in four gags to three different boys as well as one buried in sand. The series also had a dog that looked much like Snoopy. In May 1948, Schulz sold his first one-panel drawing to The Saturday Evening Post; within the next two years, a total of 17 untitled drawings by Schulz were published in the Post, simultaneously with his work for St. Paul Pioneer Press. Around the same time, he tried to have Li'l Folks syndicated through the Newspaper Enterprise Association; Schulz would have been an independent contractor for the syndicate, unheard of in the 1940s, but the deal fell through. Li'l Folks was dropped from the Pioneer Press in January 1950.

At its height, Peanuts was published daily in 2,600 papers in 75 countries, in 21 languages. Over the nearly 50 years that Peanuts was published, Schulz drew nearly 18,000 strips. The strips themselves, plus merchandise and product endorsements, produced revenues of more than $1 billion per year, with Schulz earning an estimated $30 million to $40 million annually. During the life of the strip, Schulz took only one vacation, a five-week break in late 1997 to celebrate his 75th birthday; reruns of the strip ran during his vacation, the only time reruns occurred while Schulz was alive.

The first book collection of Peanuts strips was published in July 1952 by Rinehart & Company. Many more books followed, and these collections greatly contributed to the increasing popularity of the strip. In 2004, Fantagraphics began their Complete Peanuts series. Peanuts also proved popular in other media; the first animated TV special, A Charlie Brown Christmas, aired in December 1965 and won an Emmy award. Numerous TV specials were to follow, the latest being Happiness is a Warm Blanket, Charlie Brown in 2011. Until his death, Schulz wrote or co-wrote the TV specials and carefully oversaw production of them. 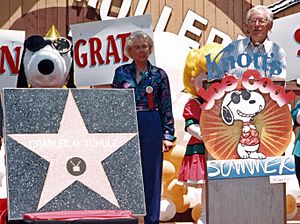 Charlie Brown, the principal character for Peanuts, was named after a co-worker at the Art Instruction Inc. Schulz drew much more inspiration than this from his own life, some examples being:

In addition to his lifelong interest in comics, Schulz was interested in art in general; his favorite artist in his later years was Andrew Wyeth. As a young adult, Schulz also developed a great passion for classical music. Although the character Schroeder in Peanuts adored Beethoven, Schulz's personal favorite composer was reportedly Brahms.

Schulz was asked if, for his final Peanuts strip, Charlie Brown would finally get to kick that certain football after so many decades (one of the many recurring themes in Peanuts was Charlie Brown's attempts to kick a football while Lucy was holding it, only to have Lucy pull it back at the last moment, causing Charlie Brown to fall on his back). His response, "Oh, no. Definitely not. I couldn't have Charlie Brown kick that football; that would be a terrible disservice to him after nearly half a century." Yet, in a December 1999 interview, holding back tears, he recounted the moment when he signed the panel of his final strip, saying, “All of a sudden I thought, 'You know, that poor, poor kid, he never even got to kick the football. What a dirty trick — he never had a chance to kick the football.'”

Schulz died in his sleep at home on February 12, 2000, at around 9:45 pm, from colon cancer. The last original Peanuts strip was published the very next day, on Sunday, February 13. Schulz had previously predicted that the strip would outlive him, with his reason being that his comic strips were usually drawn weeks before their publication. Schulz was buried at Pleasant Hills Cemetery in Sebastopol, California.

As part of his contract with the syndicate, Schulz requested that no other artist be allowed to draw the Peanuts comic strip. United Features had legal ownership of the strip, but honored his wishes, instead syndicating reruns of the strip to newspapers. New television specials have also been produced since Schulz's death; however, the stories are based on previous strips, and Schulz always stated that Peanuts TV shows were entirely separate from the strip. New stories have also been produced for publication as licensed comic books.

Schulz was honored on May 27, 2000, by cartoonists of more than 100 comic strips, who paid homage to him and Peanuts by incorporating his characters into their comic strips on that date. 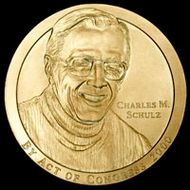 Schulz received the National Cartoonists Society's Humor Comic Strip Award in 1962 for Peanuts, the Society's Elzie Segar Award in 1980, and was also the first two-time winner of their Reuben Award for 1955 and 1964, and their Milton Caniff Lifetime Achievement Award in 1999. A replica of this star appears outside his former studio in Santa Rosa. Schulz is a recipient of the Silver Buffalo Award, the highest adult award given by the Boy Scouts of America, for his service to American youth.

A proponent of manned space flight, Schulz was honored with the naming of Apollo 10 command module Charlie Brown, and lunar module Snoopy launched on May 18, 1969.

On January 1, 1974, Schulz served as the Grand Marshal of the Rose Parade in Pasadena, California.

Schulz was a keen bridge player, and Peanuts occasionally included bridge references. In 1997, according to Alan Truscott, the American Contract Bridge League (ACBL), awarded both Snoopy and Woodstock the honorary rank of Life Master, and Schulz was delighted. According to the ACBL, only Snoopy was awarded the honor. Schulz was inducted into the United States Figure Skating Hall of Fame in 2007.

Schulz was the inaugural recipient of The Harvey Kurtzman Hall of Fame Award, accepted by Karen Johnson, Director of the Charles M. Schulz Museum, at the 2014 Harvey Awards held at the Baltimore Comic Convention in Baltimore, Maryland.

On July 1, 1983, Camp Snoopy opened at Knott's Berry Farm, a forested, mountain theme area featuring the Peanuts characters. It has rides designed for younger children and is one of the most popular areas of the amusement park.

When the Mall of America in Bloomington, Minnesota opened in 1992, the amusement park in the center of the mall was themed around Schulz's Peanuts characters, until the mall lost the rights to use the brand, in 2006.

The Jean and Charles Schulz Information Center at Sonoma State University opened in 2000 and now stands as one of the largest buildings in the CSU system and the State of California, with a 400,000-volume general collection and with a 750,000-volume automated retrieval system capacity. The $41.5 million building was named after Schulz and his wife donated $5 million needed to build and furnish the structure.

In 2000, the Sonoma County Board of Supervisors renamed the county airport as the Charles M. Schulz - Sonoma County Airport in the cartoonist's honor. The airport's logo features Snoopy in goggles and scarf, taking to the skies on top of his red doghouse.

Peanuts on Parade has been St. Paul, Minnesota’s tribute to its favorite native cartoonist. It began in 2000 with the placing of 101 5-foot-tall (1.5 m) statues of Snoopy throughout the city of St. Paul. Every summer for the following four years, statues of a different Peanuts character were placed on the sidewalks of St. Paul. In 2001, there was Charlie Brown Around Town, 2002 brought Looking for Lucy, in 2003 along came Linus Blankets St. Paul, ending in 2004 with Snoopy lying on his doghouse. The statues were auctioned off at the end of each summer, so some remain around the city, but others have been relocated. The auction proceeds were used for artist's scholarships and for permanent, bronze statues of the Peanuts characters. These bronze statues are in Landmark Plaza and Rice Park in downtown St. Paul.

The Charles M. Schulz Museum and Research Center in Santa Rosa opened on August 17, 2002, two blocks away from his former studio, celebrating his life's work and the art of cartooning. A bronze statue of Charlie Brown and Snoopy stands in Depot Park in downtown Santa Rosa.

Santa Rosa, California, celebrated the 60th anniversary of the strip in 2005 by continuing the Peanuts on Parade tradition beginning with It's Your Town Charlie Brown (2005), Summer of Woodstock (2006), Snoopy's Joe Cool Summer (2007), and Look Out For Lucy (2008).

In 2006, Forbes ranked Schulz as the third-highest earning deceased celebrity, as he had earned $35 million in the previous year. In 2009, he was ranked sixth. According to Tod Benoit, in his book Where Are They Buried? How Did They Die?, Charles M. Schulz's income during his lifetime totaled more than $1.1 billion.

Calvin and Hobbes creator Bill Watterson wrote in 2007: "Peanuts pretty much defines the modern comic strip, so even now it's hard to see it with fresh eyes. The clean, minimalist drawings, the sarcastic humor, the unflinching emotional honesty, the inner thoughts of a household pet, the serious treatment of children, the wild fantasies, the merchandising on an enormous scale—in countless ways, Schulz blazed the wide trail that most every cartoonist since has tried to follow."

All content from Kiddle encyclopedia articles (including the article images and facts) can be freely used under Attribution-ShareAlike license, unless stated otherwise. Cite this article:
Charles M. Schulz Facts for Kids. Kiddle Encyclopedia.