The park features 40 rides including roller coasters, family rides, dark rides and water rides, and it employs approximately 10,000 people. Unlike the rest of the Cedar Fair parks which are amusement parks, Knott's Berry Farm is the only theme park in the Cedar Fair chain.

The origin of the theme park dates back to the mid 1920s, when Walter Knott and his family began selling berry products at a roadside stand along State Route 39 in California. By the 1940s, a restaurant, several shops, and other attractions had been constructed on the property to entertain a growing number of visitors, including a replica ghost town.

The site continued its transformation into a modern amusement park over the next two decades, and an admission charge was added in 1968. The park was sold to Cedar Fair in the late 1990s, and the family's food business was eventually acquired by The J. M. Smucker Company. 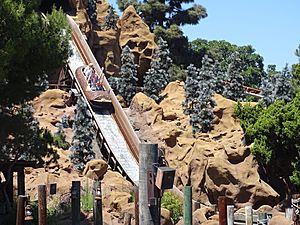 The theme park sits on the site of a former berry farm established by Walter Knott and his family. Beginning in the mid 1920s, the Knott family sold berries, berry preserves, and pies from a roadside stand along State Route 39.

In 1934, the Knotts began selling fried chicken dinners in a tea room on the property, later called "Mrs. Knott's Chicken Dinner Restaurant". The dinners soon became a major tourist draw, and the Knotts built several shops and other attractions to entertain visitors while waiting for a seat in the restaurant. In 1940, Walter Knott began constructing a replica Ghost Town on the property, the beginning of the present-day theme park. The idea of an amusement park really picked up in the 1950s when Walter Knott opened a "summer-long county fair". 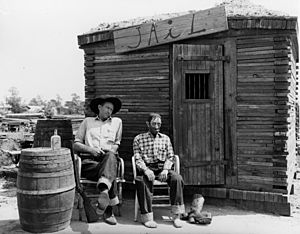 Wood carver Andy Anderson with Sad Eye Joe in the Ghost Town area of the park, 1941

In 1968, for the first time, an admission price was required to get into the park, originally set at 25 cents. The Calico log ride opened in 1960. The park became a popular destination for conservative college students in the 1960s.

On April 12, 1974, Cordelia Knott died. On December 3, 1981, Walter Knott died, survived by his children who would continue to operate Knott's as a family business for another fourteen years, they later decided to sell off their businesses.

In 1995, the Knott family sold the food specialty business to ConAgra Foods, which later re-sold the brand to The J.M. Smucker Company in 2008. 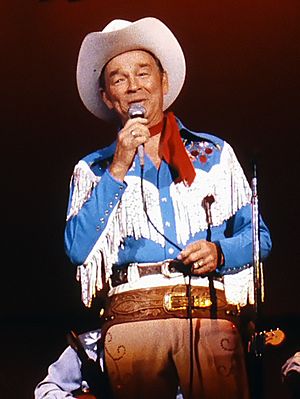 In 1997, the Knott family sold the amusement park operations to Cedar Fair Entertainment Company. Initially, the Knotts were given an opportunity to sell the park to The Walt Disney Company. The park would have been amalgamated into the Disneyland Resort and converted into Disney's America, which had previously failed to be built near Washington, D.C. The Knotts refused to sell the park to Disney out of fear most of what Walter Knott had built would be eliminated.

Since being acquired by Cedar Fair, the park has seen an aggressive shift towards thrill rides, with the construction of a number of large roller coasters and the addition of a high-performance Shoot-the-Chutes ride Perilous Plunge. Perilous Plunge had the record of being the tallest and steepest water ride in the world until September 2012 when it was closed and removed. 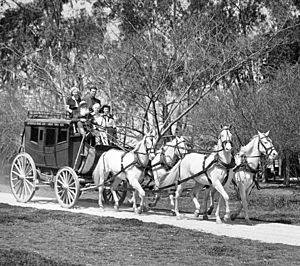 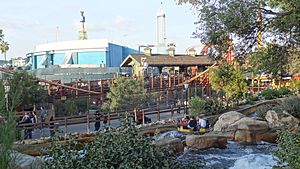 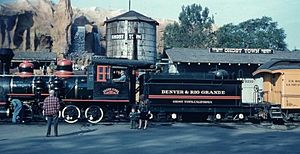 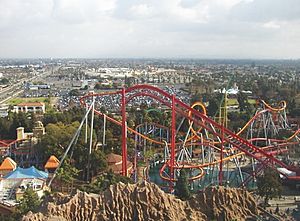 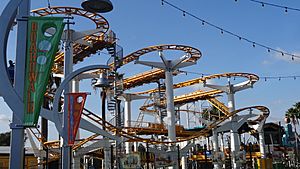 A view of The Boardwalk following its 2013 expansion 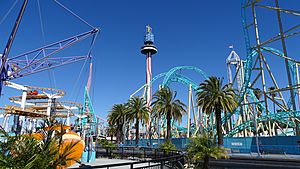 The Boardwalk area including Hangtime under construction 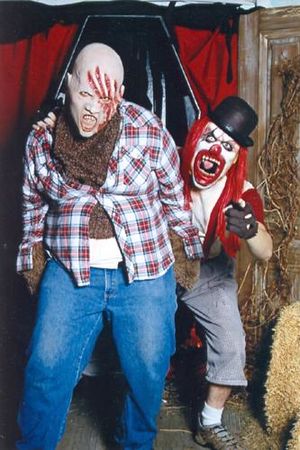 The park's annual Knott's Scary Farm has drawn crowds since 1973. Initially fake corpses and other static figures were rented from a Hollywood prop house, but Bud Hurlbut, the creator/concessionaire of the Mine Ride, Log Ride and other rides at Knott's, decided that this wasn't enough. He dressed up in a gorilla suit and started scaring guests on the Mine Ride. Halloween Haunt was an instant hit, and by the next year, the event sold out nightly. During this special ticketed event, the entire park (or major portions of it) re-themes itself into a "haunted house" style attraction in the form of mazes and "scare zones" in the evening.

Over a thousand specially employed monsters are also scattered—often hidden out of view—throughout the park at this time. Some of the characters have become well-known, such as the green witch, which has been portrayed by Charlene Parker since 1983, the longest of any performer. Several attractions are decorated for the event including the Timber Mountain Log Ride and Calico Mine Train and there are 13 mazes of various themes. 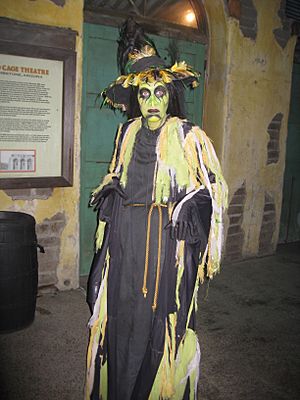 Winter Coaster Solace is an event that takes place in the first or second weekend of March every year when roller coaster enthusiasts can come before the park opens and stay after the park closes to ride the rides and eat at the Chicken Dinner Restaurant. It is intended to provide "solace" to visitors from other parts of the country where theme parks and roller coasters are seasonal, not year-round operations like the Southern California parks. Knott's Berry Farm also used to give attendees behind the scenes tours of the rides.

Every year since 1991, Knott's has offered free admission to veterans and their families during the month of November. Though this was originally started as a tribute to returning Gulf War veterans, they subsequently expanded it to include all veterans and have run it every year since.

A Christmas event known as "Knott's Merry Farm" also happens annually. Previous Merry Farm events have included manufactured snow, handcrafts exhibits, and a visit with Santa Claus. This event was originally created in the Fall of 1985.

Praise (festival) has been a Christian themed celebration presented for many years as a mix-in special event of music and comedy on New Year's Eve. 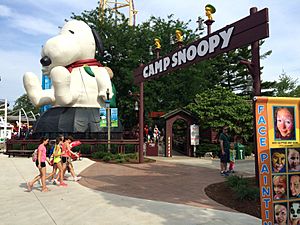 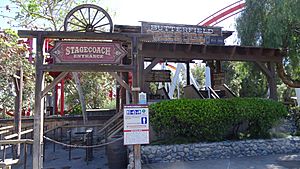 Craftsmen in Ghost Town demonstrate the arts of the blacksmith, woodcarver, glass-blower, sign cutter, and spinner. Demonstrations of narrow gauge railroading and farm equipment hobbyists accompany additional merchant stalls of cottage-craft fairs seasonally at discounted admission which is restricted to Ghost Town only.

The Ghost Town area has a few other notable attractions. The Bird Cage Theatre only hosts two seasonal entertainments—during "Knott's Merry Farm," two small productions of "The Gift of the Magi" and "A Christmas Carol," and a Halloween Haunt thrill show. 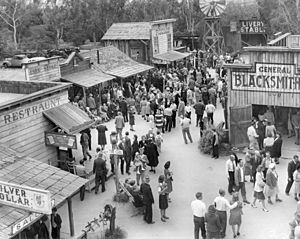 The Calico Stage, a large open-air stage in Calico Square, hosts a variety of shows and acts, big and small, from those of elementary school students, Gallagher, a local band, and the summer-spectacular All Wheels Extreme stunt show featuring youthful performers demonstrating aerial tricks with acrobatics, trampolines, and riding ramps with skates, scooters, skateboards, and freestyle bikes to popular music.

Many parts of Ghost Town are forever lost to progress. The conversion of the Silver Dollar Saloon to a shooting gallery, Hunters Paradise shooting gallery to Panda Express and the original Berry Stand, moved several times with its last location now occupied by the Silver Bullet station.

What is left of Ghost Town today was based on Calico ghost town and other real ghost towns in the Western United States such as Prescott, Arizona. Walter Knott inherited his uncle's silver mill and land, then bought more of the actual Calico ghost town in 1951 and developed it.

Formerly known as Wild Water Wilderness, now part of Ghost Town, that features two major ride: the Pony Express, a horse themed family roller coaster installed in 2008 and Calico River Rapids opened in 2019. Nearby Pony Express is Rapids Trader, a small merchandise stand. It is also home to Mystery Lodge, a multimedia show based on an Expo 86 pavilion featuring a Native American storyteller.

Fiesta Village was built in 1969 with a pop-culture Mexican theme. It was the second area constructed after the completion of Ghost Town. Stores like Casa California, restaurants like Pancho's Tacos, La Papa Loca, and La Victoria Cantina, games like Shoot If Yucan, and the themed rides like La Revolución, Jaguar!, and Montezooma's Revenge, along with the former attraction Tampico Tumbler, all contribute to the Mexican and Aztec theme of the area. In 2013 colorful string lights were added for the summer season. 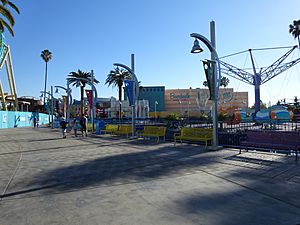 Boardwalk Games include physical challenges such as a rock wall, soccer, basketball and a rope ladder crawl. A variety of traditional pitch three balls and win a prize type games, such as squirt gun into clowns mouth, knock off milk bottles, pitch a quarter onto a plate are pitched by hawkers along the Boardwalk Games midway.

In September 2012, Perilous Plunge closed for an expansion of the Boardwalk. Perilous Plunge was noticeably known as one of Knott's major thrill rides. The boardwalk reopened after a year transformation with two flat rides and a new family roller coaster taking the spot of Perilous Plunge. The Boomerang roller coaster also got repainted with a new vibrant green and yellow color scheme. 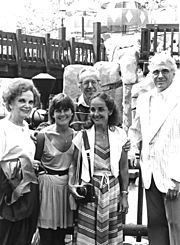 Camp Snoopy is home to the park's family and children's rides, with many of the rides and attractions being built specifically for children and guests who cannot ride the park's more aggressive attractions. Its theme is Charles M. Schulz' "Peanuts" comic strip characters. Snoopy has been the mascot of Knott's Berry Farm since 1983, and the characters can now be seen at all of Cedar Fair's parks, except Gilroy Gardens.

The 14 rides include a mini roller coaster called the Timberline Twister, a Zamperla Rockin' Tug called Rapid River Run, and a steel spinning roller coaster called Sierra Sidewinder. For guests who cannot ride the park's more aggressive and thrilled rides, Camp Snoopy contains a good number of rides for guests of all ages including infants, children, and seniors. With the exception of Sierra Sidewinder and Timberline Twister, the rides are relativity tame and not aggressive.

The 2 ft (610 mm) narrow gauge Grand Sierra Railroad takes guest on a four-minute train ride through the reflection lake. The ride was made shorter with the construction of Silver Bullet. As part of the 30th Anniversary makeover, the train ride received a series of Peanuts vignettes along the track and narration by the character Linus. 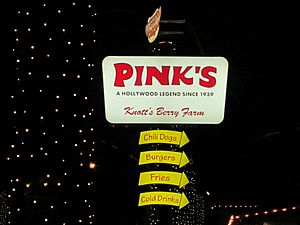 Many of the original attractions are outside the gates of the current-day theme park along Grand Ave. at the California Marketplace, mostly things which would no longer be considered interesting to today's audience, or things which were merely there for decoration. Near the restrooms behind Berry Place are the waterfall overshooting the water wheel and historic gristmill grindstone, a replica of George Washington's Mount Vernon estate fireplace hearth, and what remains of the visible beehive.

Some attractions still exist, but have been incorporated into backstage areas, such as the Rock Garden, now an employee smoking area. Other attractions have been removed, such as the historic volcano, and the cross-section of giant sequoia with age rings denoting historic events such as Christopher Columbus visiting America. 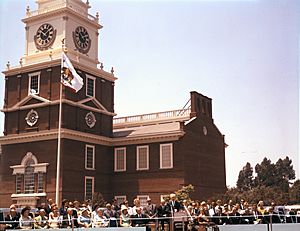 Walter Knott at the dedication of Knott's full-scale replica of Independence Hall, July 4, 1966

The east side of the property, divided by Beach Blvd., features the main parking lot, Knott's Soak City a seasonal water park that requires separate admission, the picnic grounds rental areas, complementary admission to Independence Hall and gift shop, and the Church of Reflections which was moved outside the theme park in 2004 and held non-denominational Sunday services until 2010. A tunnel and pedestrian underpass beneath Beach Blvd. connects the main parking lot to the shops, restaurants and theme park.

Knott's Soak City is a water park. It opened in 1999 as Soak City U.S.A. It requires separate admission from Knott's Berry Farm. In addition to the water park across the street from the main theme park, Cedar Fair also formerly owned two satellite Knott's Soak City Parks, in Palm Springs and Chula Vista. 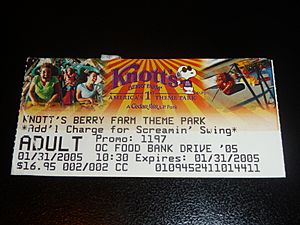 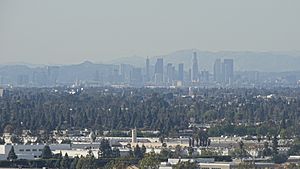 Downtown Los Angeles as viewed from the Sky Cabin 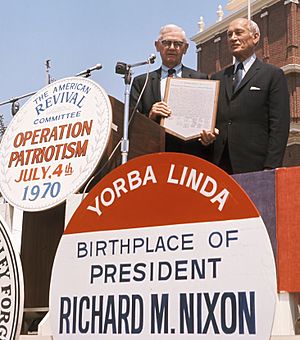 The J.M. Smucker Company continues to sell the jam and preserves made famous by the Knott family; however, other products, such as the syrups, have been discontinued due to low demand.

In November 2013, Knott's Berry Farm began selling their "Berry Market" brand of preserves at the park. The Berry Market brand is all-natural. They are unable to use "Knott's" on the label, since Smucker's owns the rights to the name.

All content from Kiddle encyclopedia articles (including the article images and facts) can be freely used under Attribution-ShareAlike license, unless stated otherwise. Cite this article:
Knott's Berry Farm Facts for Kids. Kiddle Encyclopedia.