GhostRider is a wooden roller coaster at Knott's Berry Farm in Buena Park, California. It is located in the Ghost Town section of the park, south of the main entrance. It is the tallest and longest wooden coaster on the West Coast of the United States. 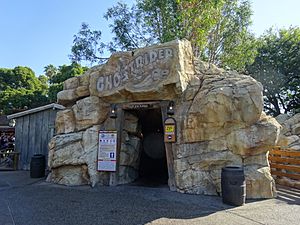 The ride was formerly manufactured by the defunct Custom Coasters International. Construction on the attraction proceeded so quickly that the coaster was completed and opened nearly six months ahead of schedule. In August 1999, an unsecured piece of wood from the track was lifted by a passing train and thrown into another car that was passing below. Five people sustained minor injuries and the attraction was temporarily closed for inspection and retrofitting of the track.

On August 20, 2015, it was announced that GhostRider would be refurbished and restored for Ghost Town's 75th anniversary. The refurbishment, conducted by Great Coasters International, began on September 8, 2015, and was completed in June 2016. The refurbishment saw the replacement and re-profiling of most of the track, the removal of the mid-course brake run and the replacement of the PTC trains with GCI's Millennium Flyer trains.

Riders approach the ride near the entrance to Ghost Town. The queue begins in a mining tunnel and leads into the mine-themed queue house. After a wait in both levels of the queue, riders board one of the three GCI Millennium Flyer trains of the ride. The trains themselves are colored gold, silver, and copper similar to the precious mining metals.

The tunnel entrance was once part of the Pan for Gold attraction. As of May 2016, Pan for Gold has returned to its former location and the queue for GhostRider now snakes around it.

There is a small initial descent into a ravine, which is followed by a gradual sweep to the right. Trains then pass through the transfer track and climb the lift hill. At the top, riders descend a 108-foot (33 m) drop, turning left and rising up over an airtime hill before making a sweeping left-hand turnaround. After the turnaround, riders descend another drop, and rise up a gradual right-hand climb, before descending into the structure of the lift hill, and rising up into the ride's midway turnaround.

The ride follows an L-shaped double out and back pattern. Most of the attraction resides on the parking lot near the marketplace. The ride crosses over Grand Avenue four times, road connecting southbound Beach Boulevard to the parking lots. The first two in the first half and last two in the second half.

The initial drop was covered with a “scream shed” shortly after opening with a metal overhang after nearby residents complained of excessive noise. At night, orange rope lights light up the handrails of the ride.

Over the sixteen years of GhostRider's operation, the trains have gone through several different design updates. The PTC trains were originally delivered, Copper was a dark brown, Silver was a flat gray, and Gold was a light brown. All trains sported the standard "Knott's" logo on the front of the train. Later on, ride logos were added and a metallic sheen added onto Gold and Copper trains. Lastly, the third update added airbrush effects on the sides of the individual cars along with a customized "Knott's GhostRider" logo on the front. Also Copper was repainted to a more metallic orange/copper.

Although the ride has three trains, only two are in use at any time. The third train is usually being maintained and will be switched out with one of the other trains during the duration of the year. Each train is gets a maintenance overhaul during the year. After the 2016 refurbishment, the trains were replaced with Great Coasters International's Millennium Flyer trains. As of November 2019, only the Gold and Silver trains are operating, while Copper is under maintenance.

All content from Kiddle encyclopedia articles (including the article images and facts) can be freely used under Attribution-ShareAlike license, unless stated otherwise. Cite this article:
GhostRider (roller coaster) Facts for Kids. Kiddle Encyclopedia.